Home / Features / Why I Don’t Care What Donald Sterling Says

Why I Don’t Care What Donald Sterling Says

Certainly, you arent taking the “pro” side on the Donald Sterling racism issue.

No. The whole thing is kind of disorienting. Since I sometimes read underground sports writers like Bill Simmons and listen to this obscure station here in Vegas called ESPN Radio, Ive known about Sterlings attitude towards blacks for a long time. I knew, for example, that, when interviewing Rollie Massimino for a coaching job back in the 1980s, Sterling called his players a bunch of niggers. I knew he lost in a huge suit by the federal government for housing discrimination, and that one reason he gave for not wanting to rent to black people was that they stink and attract vermin. I never really understood why an NBA owner being openly racist for decades had never become a problem.

So hes extra racist! And a racist is the worst thing a person can be. Racists are worse than Hitler.

Uhh… sure. But what about murderers?

Sterling is a murderer?

No, but his son shot someone in the back, claimed it was self defence and got away with it after Sterling used his connections to make the case disappear. No charges were ever filed. But were cool with rich people being allowed to murder with impunity, so long as they dont say mean things about blacks. Were also fine with slum lords.

Sterling specialized in building low income housing, then harassing and extorting his tenants. He lost numerous lawsuits filed by people who rented from him and/or who were not allowed to rent from him due to their race. So, he tried to change the law to decrease the rights of tenants. But thats all OK too, just as long as you dont utter certain key phrases.

Well, Im certain that Ill be rich too one day, so the more power the rich have, the better. But everyone hates racism, so I do too! However, if Sterlings always been racist, why is this a big deal all of the sudden?

I dont know. I guess because it was recorded and that gives the media a more titillating story. What irritates me, of course, is that we make a big fuss and get all upset about the most trivial aspect of the situation, as usual.

Are you saying that racism is trivial?

No. But remember when academics and people like that first said stuff like black people cant be racist?

Yeah. I guess they were trying to make some point…

And it was a fair point. They wanted us to understand that institutional racism, and racial oppression and the legacy of slavery are far more damaging than your uncle having a few too many beers and saying something rude about another race. Every race has uncles who say some stupid shit about the other races. But the more systematic and pernicious kinds of racism always benefited whites, especially the rich ones, and hurt other races, especially blacks. 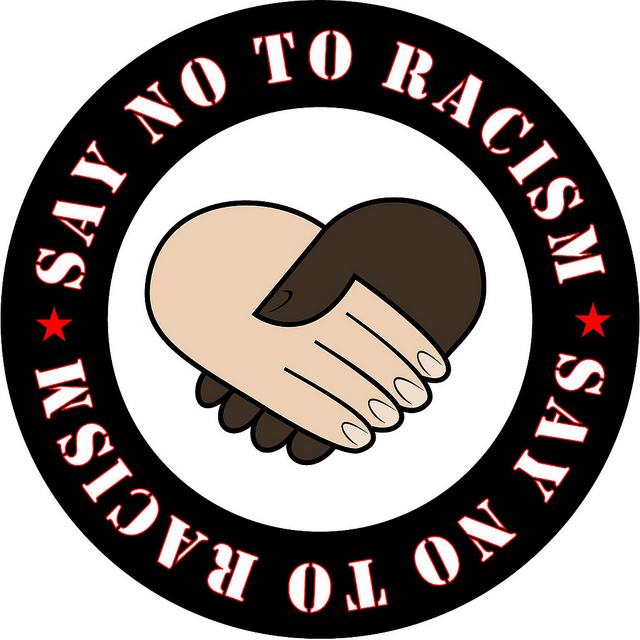 And what does that have to do with Sterling?

Everyone is mad at Sterling for drunk uncle racism. His long record of bigoted statements might amount to a bit more than that, but ultimately its just one guy being a dickhead. However, when he was convicted in federal court of systematically compromising the ability of minorities to house themselves, and had to pay the biggest discrimination judgement in history, nobody gave a shit. And nobody gives a shit about him actively engaging in racial oppression even in the midst of this scandal, except perhaps, as an accoutrement to him saying naughty things.

Are you saying that being a slumlord who gets obscenely rich by fucking over all of his tenants, and who discriminates against minorities, is worse than saying something nasty about Magic Johnson?

Weve come full circle. Systematic oppression, be it racist or classist, is no longer a concern. Were totally distracted by matters of etiquette and stupid morality plays staged by the infotainment media. We dont care about problems, we care about judging other people as being bad so we can pat ourselves on the back for not being in the KKK. Meanwhile, you could argue that anyone making money off the NBA, be they player, owner or media is a hypocrite to complain about drunk uncle racism.

Why? At least some black people get rich from the NBA.

True. Although there are other Sterlingesque scumbags in ownership. The owner of The Magic is a pyramid scheme billionaire and a dittohead whose pet project is fighting gay rights. Of course, unless someone records him calling somebody a faggot, thats all fine.

But you besmirched my beloved NBA as a whole!

Lets talk about the more pervasive problems facing the poor, who are of course, disproportionately black, especially in cities big enough to have NBA teams. How can we help people get through the obstacle course awaiting anybody who wants to leave multigenerational poverty?

Well, I guess providing them with good social services helps. Great schools, for example, would give them at least some chance of moving up in the world even if they arent world class basketball players.

Most of us agree on that point. Yet a key part of the NBA business model is to hijack money from local governments by threatening to pull teams out of cities unless they get gigantic handouts from taxpayers. Theyve run that scam to the tune of more than $2 billion. So instead of that money going to, say, schools, it goes into the pockets of NBA players and owners. No wonder Sterling loves being an owner. The NBA is right up his alley.

But The NBA Cares!

Another fun fact about Donald Sterling is that he periodically takes out full page ads in the LA Times to congratulate himself on his humanitarian work. 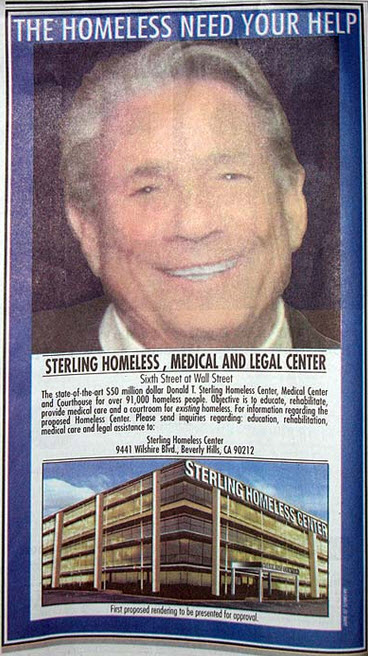 See, everyone has a good side. 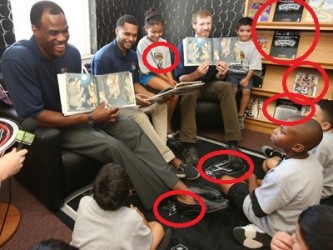 The NBA Cares says it donated $7,000 to this school. Evidently, it was $7,000 of promotional material for their business.

NBA Cares is the exact same thing. It consists of a few millionaires going to schools that they stole money from, plastering the walls with NBA advertising, donating books about The NBA and then making commercials about their generosity.

Well, at least Sterling can be forced to sell his team.

Yep. He bought the organization for $13 million and ran it on the cheap for decades so that he could profit from revenue sharing. Now, for the first time ever, he has a good team which he can sell to some other scumbag for a billion dollars. That will teach him a lesson.

And what can we learn from all of this?

As Liberal Puritanism and other forms of self-indulgent, lazy morality become normalized, and as the science of manipulating the public becomes more refined, and as our systems become more corrupt, what the powerful do, in terms of helping and hurting other people, is becoming irrelevant. It will just occasionally matter what they say. You can actively promote elements of institutional racism against poor blacks, be caught and have it all proven in court. Just dont say anything ugly about a famous, rich black guy. You can plunder struggling local governments to increase wealth that already vastly exceeds what you can spend in a lifetime. Just make sure to read a book to a kid on TV in a school that has less money because of you.

The rich and powerful can do whatever they want and hurt as many people as they want and well continue to celebrate them. Just as long as we get the chance screech at one here and there for making some stupid faux pas that doesnt really harm anyone.

For our part, well be able to agree on easily digestible, trivial moral problems that have to do with the individual failings of some villain du jour. Well be right, hell be wrong. Well congratulate ourselves for promoting justice. Hell liquidate a billion dollar asset and pretend to go to rehab or something. Then hell return to alternately enjoying total opulence and buying press and politicians to use as weapons against the rest of us. And when we get hung up on one dickhead saying one shitty thing, we’re playing that game just as much as he is.