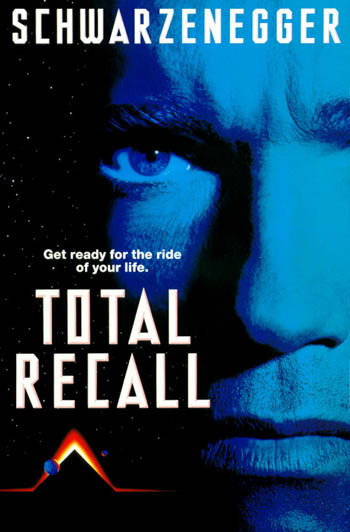 They stole his mind, now he wants it back.

Arnold was classic Arnold and he never disappoints us with his disdain for anything hetero. As the movie opened he was naked,oiled and in bed with a very hot Sharon Stone on top of him, but he could not have cared less. In the next scene she was practically fucking him on the breakfast table, but he didn’t even look at her and pushed her away. He was distracted, he said, by the thoughts of a vacation to Mars, but we know better, don’t we? The next time we saw him he was in a rock quarry banging away with a phallic-like jackhammer, in a sleeveless shirt, sweating and flexing with nothing but bear city as far as the eye could see. To get to Mars in disguise Quaid actually wore a dress and a womans wig. At Venusville there was a 3-titted whore and even a Midget prostitute, an instant boner for the normal male, but Quaid was not the least bit interested in any of this action. Even when Melina grabbed and stroked his groin, Arnold was focused, but not on her, thats for sure.

This was where Total Recall really excelled.  It was hard to determine an exact number, but I estimate at least 125 persons were shot, blown up, chopped to pieces, drilled with giant drilling bits, sucked out of pressurized airlocks, shot again in rebel uprisings and met untimely deaths in other creative ways such as suffocation. Hell, even the goldfish were executed by an exasperated and furious Vilos. We don’t know how many mutants died before the air was restored, it could have been hundreds.

There were several candidates, Benny was screwed to death with a giant drill bit, Richter got his arms chopped off by the alien machinery,Vilos exploded due to inadequate atmospheric pressure, and the super-annoying Johnny Cab Driver met a fiery death, but I really liked the assassination of the goldfish the best. 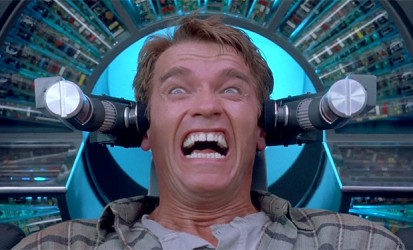 Total Recall was actually quite good.  In this movie Arnold displayed acting skills. He was just a working stiff dreaming about a perfect vacation. Of course, he was ripped and dangerous, but he still remained scared and confused, as opposed to being his usual larger than life Superhero. There was actually a plot in this movie and the ancient alien involvement was pretty creative and fascinating. Considering the rest of his body of work, this may have been Arnolds best acting performance ever. The movie was action packed, from start to finish and was not hokey or camp in any way, form or fashion. Total Recall actually won an Academy Award, a Special Achievement award for special effects and was nominated for one other. No, this was not your typical Arnie 80s action flick, Total Recall had a $65,000,000 budget and a whopping $119,000,000 gate.

If you wanted to count the bad guy, Vilos Cohaagen, yes there was.

[Quaid shoots Lori in head, killing her] Consider this a divorce.

Of course you had an evil Corporation, and this time they were making the little people and mutants hostages for the very air they breathed. They were also raping the planet with their giant mining equipment.

There might as well have been when the alien reactor was turned on.  Im going to say Yes.

You cant trust Negro gangsters with bad teeth, even when you are on Mars.