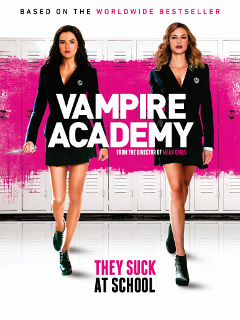 Hellhounds are now called “Psyhounds”. I don’t even know what that means.

Do you really need to go to school to learn how to suck blood?

Apparently. White trash across this great nation instinctively know how to shove Arby’s into their faces, but vampires need a little more help. Not only that, they need entire movies to be made about the whole vampire education system, which includes topics such as blood-sucking, magic spells that correspond to the four classical elements, the different types of vampires, the twelve royal vampire families, vampire church (no, really), and the art of kicking evil vampire asses. It’s pretty heady stuff. They don’t ever crank up Seventh Son of a Seventh Son, though, so this place might not be accredited.

At any rate, it’s time for us all to mosey on over to Vampire Academy and learn how to be vampires! Are you ready, guys?

Why do you watch this crap? What’s your excuse this time? Oh wait, I see Olga Kurylenko in the credits…

She has her hair up the whole time. It’s just bullshit everywhere.

Another Twilight/Harry Potter ripoff, though? Are you alright?

Hey, it’s been months since The Mortal Instruments: City of Bones. I’ve had time to recover. It’s alright. I’m… I’m ok. [Ed: The preceding statement may not be accurate.]

So what’s this one about? Is it just Harry Potter with vampires instead of witches and wizards?

Oh no, it’s much more complicated than all of that. Like most subpar book adaptations, it attempts to cram all of the exposition and story threads from the novel into the movie, leaving all sorts of inadequately developed characterizations and plot twists. No, I didn’t read the book. I didn’t even know there was a book until the credits announced it. But when the first ten minutes of the movie are just one long run-on sentence of bullshit exposition, and the explanations continue unabated for the next hour and a half, it’s generally a sign that the movie is desperately trying to explain a million things that the book covered at a more leisurely pace.

I don’t know why they do this. I mean, do we really need to have the words of the three types of vampires float across the screen as each is mentioned in the narration? Whatever happened to just immersing the viewer in the world and letting them learn these things along with a main character? Has the mind-dump exposition style ever been effective? This entire movie is like cramming for a midterm while hungover. It just doesn’t work.

Three types of vampires? Is there going to be a test on this?

First, we have the “Moroi”. They are the sexy vampires that suck blood but don’t explode into flames in the sunlight, and are the highest caste of the vampire society. Next, we have the “Dhampir”, which are half-vampire and half-human, and are charged with protecting the Moroi at all costs. I think I liked them better when they protected the humans from the vampires, but I guess this is what happens to the ones afraid of tax evasion. Finally, we have the “Strigoi”, which are the evil mindless beasts that burn in the sunlight and can only be killed by a silver stake to the heart.

Apparently, the Moroi can be turned into Strigoi if they kill someone while feeding. Misbehaving Dhampir can also be sold off into some type of pseudo-sexual slavery where they are used as renewable feedbags for the Moroi; these fallen Dhampir are referred to as “blood whores”. There are also humans that sign up to be feedbags for the Moroi; these people are really diehard Twilight fans led astray by the vampires. That wasn’t a joke, by the way. That line is really in this movie.

No word on whether or not the Strigoi can turn into anything else. Maybe they’re saving that for the sequel.

I’m already bored. Nobody even gets naked in this movie, do they?

This is a modern teen vampire movie. All eating of other people is done sans coitus. We wouldn’t want to offend anyone!

The movie begins with a car crash caused by the song “Bad Girls” by M.I.A. The crash kills the parents of Lissa, a vampire princess who is one of our main characters. Yes, vampires can be killed by car crashes if they are Moroi. It’s only the Strigoi that are nigh-invincible. Anyway, Lissa survives the crash, as does her Dhampir guardian Rose. A year after the crash, they run away from Vampire Academy and hide out in Oregon for nearly a year. They are eventually hunted down by other Dhampir and are subsequently dragged back to Vampire Academy just in time for the plot of this movie. Luckily, everything I wrote about in this paragraph is covered in the first ten minutes of the movie, so it doesn’t feel abbreviated in the slightest.

So yeah, at this point, I’ve only talked about the first ten minutes of the movie. We’re ten minutes in, and it’s already this stupid. Would you like to know more?

Absolutely not, but I’m sure you’re going to keep typing anyway.

Rose has a psychic link with Lissa, and inadvertently sees into her mind for brief periods of time. When this happens, Rose’s eyes turn to a golden color, and the movie switches to POV shots of Lissa walking around talking to people while Rose gives her commentary. Yes, this movie comes with its own built-in MST3K commentary track for selected scenes. Now that’s planning for the future! Eat your heart out, Marvel Studios!

For her part, Lissa has the power of “compulsion”, which is essentially low-level mind control and suggestion. Their nerd friend Natalie has the ability to lick blood off the walls and determine whether or not it comes from royal lineage. They’re basically the worst superhero team in history. Luckily, their rogue’s gallery is even lamer: an old guy, a vindictive high school girl, the headmistress of the school, and two “psyhounds”, which are like hellhounds, except that they are from “Psy”. Wherever that is.

Maybe the hounds are psychic. They can read everyone’s mind, but are unable to communicate this information to anyone. How heartbreaking.

So, the students at Vampire Academy need to “declare” one of the four types of elemental magic: Fire, Air, Earth, and Water. I guess this is supposed to be a ripoff of the four different houses from Harry Potter, but the movie doesn’t really spend that much time with it. They only discuss it so that they can set up a bullshit plot twist: Lissa hasn’t been able to decide on a magic to declare because her real power lies in the Fifth Element: Spirit. Her superpower lies in her ability to heal people and animals from the brink of death. Coincidentally, this is the same power that St. Vladimir, the founder of Vampire Academy, possessed. See? It is her destiny!

There’s also a sideplot with a former teacher named Ms. Karp, who also possessed the power of Spirit. For some reason, she turned herself into a Strigoi to make the hurting stop. Well, someone had the right idea in regards to their appearance in this movie. She resurfaces in the setup for the sequel at the end, which is completely pointless since there is no way in Hell that this movie is getting a sequel.

Well, Percy Jackson got a sequel…

So who do the girls want to have sex with?

Lissa used to be the girlfriend of Aaron, but he has since moved on to a girl named Mia. She’s now focused on sleeping with a brooding guy named Christian. Rose thinks that Christian is creepy and weird, and tries to scare him off. For her part, Rose wants to sleep with the Dhampir badass Dimitri, but he keeps going through the whole “I’m 28, you’re 17” speech. We’ve heard it all before, bro. Some guy called Mason wants to sleep with Rose, but she’s just not into him. He’s just a friend. Finally, Natalie wants to sleep with a guy named Ray; Rose correctly identifies him as a “tool”. Really, though, they’re all tools, so it’s not like it’s difficult to make that assessment here.

I think “shitheel” might be a more accurate description for some of them, though.

What was the worst moment in this movie?

There’s a torture scene where the bad guy calls in “one of the Moroi’s most ingenious Air users”. He proceeds to torture Lissa by blowing on her face. Yes, he blows on her face so hard that she eventually cracks and does what the bad guy wants. Does this count as “airboarding”? Does Cheney know about this?

What was the second worst moment in this movie?

Near the end, Rose does an impression of Maximus’ “Are you not entertained?” from Gladiator. It’s a terrible line delivery, and it left me wondering if they really didn’t have a better take available. Can’t they just dub in a better delivery in post? How do these things happen?

Oh yeah, Rose also references the Langley heist from Mission Impossible 1 at one point. Was she even alive when that movie came out?

Any other notable idiocy?

Rose is “shadow-kissed” because she was really killed in the car accident and brought back to life by Lissa’s awakening Spirit powers. This fact apparently makes her the ideal guardian for Lissa because St. Vladimir’s guardian was also “shadow-kissed.” It’s just fascinating stuff, and I’m glad that they took time out from the “story” to tell us all of this. It really helps the overall movie out. Where would I be if I didn’t know that Rose was “shadow-kissed”? God, the movie would have completely sucked then!