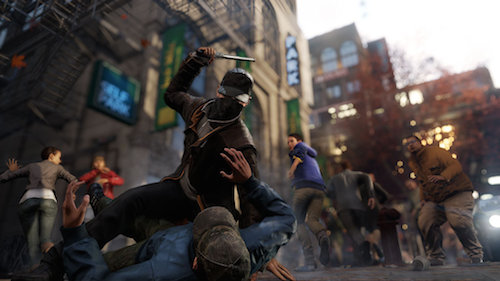 Its not often that you get the chance to sit courtside for a case of mass delusion, but thats exactly what happened when Ubisoft first revealed Watch Dogs at E3 2012. Overnight, the game announcement took on a life of its own: Here was a game that wasnt a sequel, (seemed to) possess mechanics other than guns, and maybe a ~*deep and profound message*~  about privacy and technology, blah blah blah. Give props to Ubisofts marketing department for including all the elements of a title that the hipster games press would not be able to help but fellate until the release of the actual product. Almost two years later, that product is here, folks, and Im here to tell you what any person with half a fucking brain (read: not game journalists) could have predicted for you on that day in June 2012: Watch Dogs sure is an open world video game. Yep, it sure is!

Lets begin with the presentation: Watch Dogs isnt exactly an ugly game, but it is very much one that is held back by Ubisofts continued insistence on building games to scale to old platforms. Nothing on the PS4 version stood out as visually impressive, especially after playing through Infamous: Second Son. Even if were comparing Watch Dogs to PS3 and Xbox 360 games, it has the unfortunate position of existing in a world where Grand Theft Auto V showed just how much scope and performance can be squeezed out of ancient hardware. With Watch Dogs, Ubisoft doesnt even make the attempt. This apparent apathy isnt limited to the visuals, either: Watch Dogs features the weakest licensed soundtrack Ive ever seen in an open-world game, with tracks one can only assume were chosen for their rock-bottom royalty fees. (It should be noted, however, that a key, prolonged mid-game shootout is set to Wu-Tang Clans CREAM. Whoever made that decision should have been consulted more for the rest of the project.) 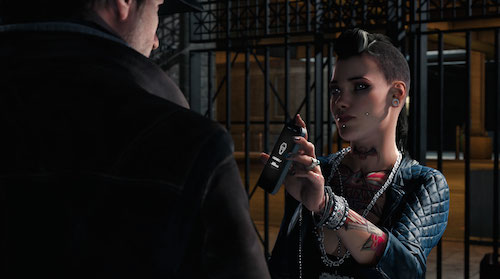 Aiden Pierce is a big step down from Daniel Craig, Lisbeth.

For the most part, Watch Dogs plays like every other open-world game on the market. You drive to icons on a map to get missions, and then drive somewhere else on the map to kill people or interact with something before escaping the area.  Between missions, you get to watch cutscenes where embarrassed voice actors do their best to act out a Serious Video Game Writers convoluted shortbus version of drama. Watch Dogs checks all these boxes, and so the games attempted twist on genre norms lies in its hacking feature. Generally speaking, the use of hacking has two novel purposes: The first  instead of firing on vehicles in driving missions (you cant shoot from cars, because unexplained reasons), you use timed button presses to hack different city functions and try to stop your chasers by causing car wrecks, closing bridges, etc. Its a good idea, but not smoothly executed enough to be enjoyable: A lot of these segments usually ended with me ramming the target car into things, getting out, taking cover, and firing until everyone was dead.

The other use of hacking is far more interesting, and where most of the games promise lies: Though you can go gung-ho if youd like, during missions, you have the option of sneaking around the environment to trigger various items that help you fight smarter battles. For instance, instead of running into a gunfight in an open space where a guard (with the ability to radio backup) is watching from a balcony, you might instead hack a security camera you have line of sight with on the second floor, then use it to look at and blow up a breaker box near said guard. If Ubisoft had ditched the open-world concept for a more tightly constructed game full of these scenarios, Watch Dogs would be about 100 times better than it is. Thats not the game we got, however, so lets move on. 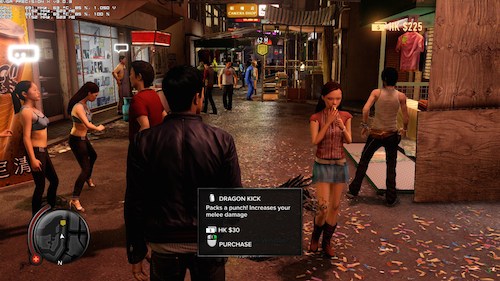 Sorry, I went to post a Watch Dogs screenshot and ended up posting a screen of a better open world game.

Even with its many flaws (first and foremost: the clunky driving mechanics for anything that isnt a motorcycle), Watch Dogs does deliver a surprisingly decent set of hybrid shooting/sneaking encounters. Weapons and ammo are plentiful, you never lose access to or have to rebuy your guns as penalty for dying, and a skill point system adds a bit of character progression. Its a good thing that the basics of cracking skulls are enjoyable, because the minigames, hacking segments (an even more tiresome take on Bioshocks tedious pipe puzzles), and online activities are a goddamned bore. (It should be noted this does not extend to the optional human trafficking/serial killer subplots, which are way more entertaining than the dreadfully boring main narrative where a sperglord Redditor hunts down the people who killed his niece.) The online features are most disappointing, as a game about the dangers of an always-connected society is hypothetically a good fit for an invasion mechanic where other players can try to hack you and mess with your game. Its a novel concept, but Watch Dogs doesnt make it exhilarating  it isnt fun, and unless youre an insufferable games press jerkwad, fun tends to be what youd measure these things by. The other online activities are standard multiplayer modes that add nothing, save another metric to factor into the statistics screen for 100% game completion.

And about those games press jerkwads: Following its announcement years ago, Watch Dogs was destined to be a disappointment for those who write about video games for money. (In reality, some press types didnt wait until the announcement was over, instead whining during their E3 livestreams the very moment a gun made an appearance). The lot projected their own expectations and demands upon Watch Dogs, pipe dreams that were never going to come to fruition: Surely this big-budget game would be the one where the most efficient/enjoyable way to interact with a virtual world (a gun) would be minimally used, because reasons. Surely this open world game wouldnt be a linear campaign supplemented by optional filler missions; all of it easily reduced to drive here, kill that, get away. Surely this game, which has the aesthetic and tone of a DVD techno-thriller aching for a Shithouse Cinema review, would be the one to ~*~*make games art*~*~ by doubling as a comprehensive treatise on privacy, technology ethics, social media, drones, the NSA, and maybe even that dork who gave up a trophy pole-dancing girlfriend and a six-figure job to spend the rest of his life on the run from dudes with guns. I do dabble in the business of hyperbole from time to time, but not here: These are very much the expectations games press types had for Watch Dogs, because theyre terrible. Theyre all terribly terrible, and theyre now using their reviews to whine that this big, stupid video game doesnt do enough to address misogyny, sexual assault/racism, and uh Kanye West. Whatever, assholes. 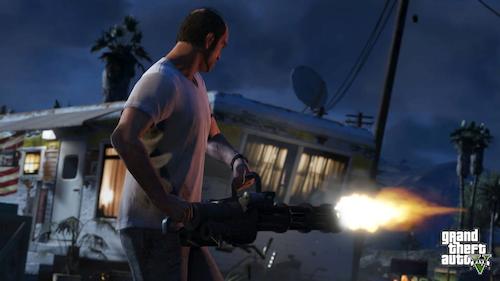 Oops, I did it again.

None of the above was ever going to happen, of course, because this isnt some experimental indie distraction made by two trust fund kids in (expensive metropolitan real estate designed to look like) a garage. This is a multimillion-dollar blockbuster, a franchise Ubisoft undoubtedly intends to milk for the next decade, and as such; it has to make its money back. Im not saying you cant use Important Issues  as flavor in games, but I am saying I dont go to the cinema, buy a ticket to The Avengers, then complain when Im not treated to a Deep And Meaningful Art Film .

The ultimate failure of Watch Dogs, then, isnt that it fails to use video games to explore issues, but that as a video game, it ultimately manifests as a generic open-world exercise with a mostly skin-deep layer of cyberpunk flavoring: You dont hit the square button to open a garage door, you hit the square button to hack the garage door. You dont collect hidden packages or text logs, you scour the city for things that have been encrypted and watch video feeds. And you dont go on silly pallet-cleansing missions, you play digital trips that frame your exploits as pretend video games within your pretend video game. If you ignore the filler (and there is a lot of filler), there is enough here to make Watch Dogs entertaining enough for a weekends worth of time. Just focus on the campaign, only drive motorcycles, and return in time to avoid late fees. Most of all, dont believe the hype the next time the games press tries to build something up as what theyd like it to be, instead of what it is.