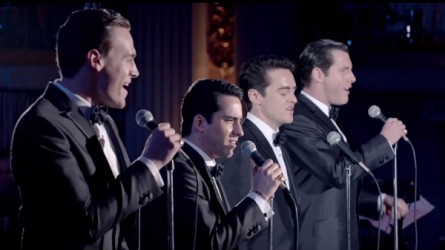 These four Jersey shore guidos show off their ‘O’ faces.

Fair Value of Jersey Boys: $4.00. This is not a wholly formulaic biopic, but Eastwood’s clean direction isn’t able to wholly tie up the divergent threads of the script. A middling rock band movie, with neither sufficient depravity nor humanity to be truly interesting.

When the Barbershop Quartet was King: The Four Seasons were a musical blind spot for me. At most, I considered them to personify a lot of what I hated in pop music- horns, schmaltz, and sentimentality. It is to the credit of this script that Jersey Boys gives a sense of the passions at play that drove the music, at least initially. Much like Bon Jovi, the Four Seasons were huge commercially but largely forgettable. And Clint Eastwood has always been at his worst when handling musicals (example: Paint Your Wagon).

The career path of the Four Seasons was a conventional trajectory for pop acts, owing as much to the partonage  of capos like Gyp DeCarlo (Christopher Walken). The original group, the Three Lovers, filled in the dry spells between gigs with burglaries and errand running for the Genovese family. Frankie Valli (John Lloyd Young) originally used his powerful falsetto as a lookout for hustling Tommy DeVito (Vincent Piazza) and Nick Massi (Michael Lomenda). Their act finally gels when they recruit songwriter Bob Gaudio (Erich Bergen), and gain the attention of swishy record producer Bob Crewe (Mike Doyle), ‘the man with the Golden Ears’.

As presented, they’re a group with great chemistry. Tommy is loud-mouthed leader of the group, Frankie is the sweet-heart, Bob is the talented ingenue, and Nick is the quiet anchor. But as the doo-wop sound goes stale and the years and tours go on, the pressures mount. Touring is a young man’s game, a routine for those without bonds and connections. And Tommy can’t seem to give up the grift and the scams that initially helped the band keep afloat.

The breakup of a band can be worse than the breakup of a love affair. With the end of the love affair, you’re only losing the relationship with that person. With the loss of a band or other artistic collaboration, you’re not only losing friendships and partnerships, you’re losing a relationship you had with an idea of yourself.  The best scene in this film is when the members of the band sit down to negotiate a settlement with DeVito’s loan sharks, and their resentments boil over. 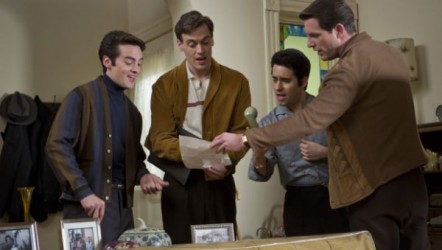 It was a time of simpler, more innocent obscene phone calls.

The narrative is handled by having various characters break the 4th wall at key scenes, an effective framing device. However, the cast is uneven when Eastwood tries to be Martin Scorcese, and the interactions never feel quite as authentic. The lines and the plot is there, but it doesn’t feel like there’s the subtext and the unspoken communication which makes for good mafia scenes. Walken is a long way off from his performances in King of New York or Suicide Kings. His bug-eyed schtick is actually the worst thing about this film.

As for the musical numbers, there are a few moments that really capture the magic of the music, of pulling off perfect harmonies and synchronization. However, the excellence of these sequences again cuts away from the development of the drama, with each scene ramping up the next musical number.

In the end, Jersey Boys is a song we’ve heard so many times before, largely lacking in new inflections. Go if you want to hear doo-wop. Stay home if you want anything else.