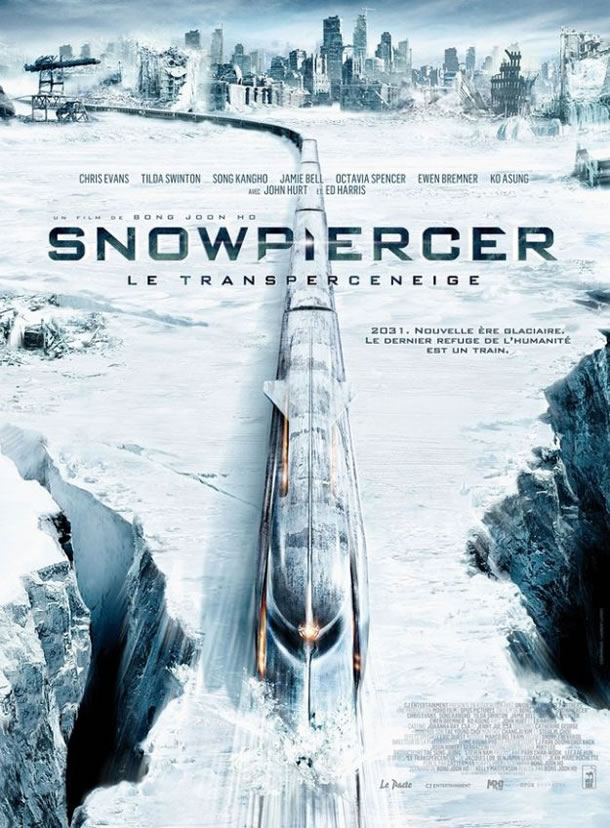 The world’s coolest choo-choo circles the globe because of Global Warming.

I really like Korean Film (Thanks, Steen!). When I saw that Joon-Ho Bong was making a movie for us Americans, I was both thrilled and apprehensive, not knowing how badly things would be screwed up. Certainly unknown to most casual moviegoers, Joon-Ho Bong is a Master and is known for movies like Barking Dogs Never Bite (2000), Mother (2009) and the blockbuster masterpiece Memories of Murder (2003). There were demands for changes to shorten the film, do voice over explanations so that idiotic Americans from Tennessee and other great states would be able to follow the film without scratching their heads, crying,or blaming The Kenyan for their own stupidity, but Im getting off the trail here. A compromise was reached and fortunately the movie was not totally ruined. 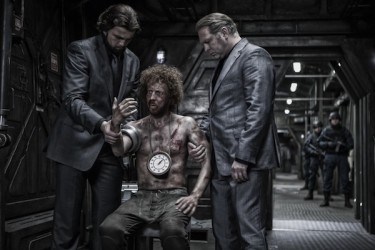 Snowpiercer was all about the effects of Global Warming and the resultant human attempted intervention that backfired horribly. What we are left with is a Super, perpetual motion engineered train that circumvents a now frozen and snowy planet, in a continuous loop. Yes, I know, there are plot holes galore, and if the viewer lets himself be distracted by them, the movie will not be enjoyable. As in most science fiction movies, much disbelief must be suspended for the viewer to enjoy the movie without poisoning the outlook with details. I don’t know how the residents were chosen, where the chickens or bugs came from and I really do not care; as far as I am concerned there is enough back story and unless you have just a rotting sponge masquerading as your brain, you should be able to figure it out enough to enjoy it. If not, go enjoy Heaven is For Real or an Adam Sandler movie. 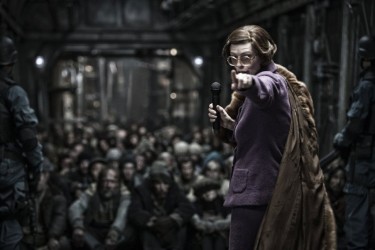 There were some outstanding acting performances in this film. Chris Evans (Captain America) is smashing as Curtis, the reluctant but passionate physical leader of the rebellion. His character is painstakingly developed and he seems somehow inconsolable and as the action dies down and more details of the grisly history of the rolling tenement is revealed, we find out exactly why in a chilling series of revelations. Tilda Swinton was magnificent as Mason. Her character was both deeply chilling and hilarious at the same time as she dominates every single scene she is in. The over-the-top cold-blooded intensity set the tone for the ever rolling Snowpiercer, which was both an engineering marvel and a chamber of horrors. Know your place. Accept your place. Be a shoe.

Alison Pill totally killed it as the pregnant and precious teacher in what I thought was the best scene in the movie, the unbelievable and surreal scene in the school room of the train. To write more would spoil things, but it was both shocking and gratifying as the Director cleverly used this bizarre pause in the action to reveal critical information about the Wilford Express. The magnificent Ed Harris was almost unrecognizable as Wilford, but as always (Radio excepted) delivered a stellar performance late in the film. 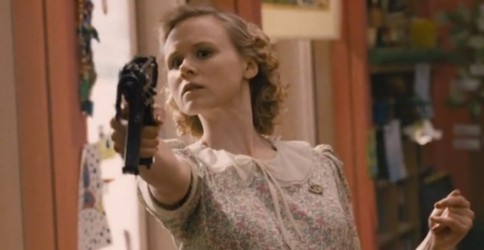 The cinematography, sets and music were high points in this film and we must appreciate what a difficult job it must have been to present a realistic, or as realistic as possible setting. The rear of the train is just grimy and claustrophobic, a picture of sadness and chronic human misery. The contrast of this human wave of despair with the front of the train is almost cartoonish, but Bong balances these interludes of stark differentiation of the classes near perfectly.

I considered NOT viewing this film for several reasons, not the least of which is the disdain for this type of movie, but the magical name of Bong gave it instant credibility. In the spirit of Metropolis or 1984 the peons realize that the pigs are walking on their hind legs as their fate deteriorates as the metal capsule and the trailing carloads with their human cargo makes its never-ending journey to nowhere. The Train is a huge, magnificent organism, supposedly eternal, but all things much eventually succumb to molt, rust, decay and death. The viewer is, however, given some hope for the survival as the human organisms crawl from the ashes. This movie is destined for a long life as a cult favorite in my opinion.

I must comment about the negative reviews of Snowpiercer, and there are plenty. This entertaining film was universally praised by professional critics, but drew a lot of fire from what is the Comic Book Crowd, I guess. This is not a surprising reaction from those basement dwellers whose number one source of entertainment outside of Loliporn is abusing their parents vacuum cleaner; and whose number two source of entertainment is throwing loaded vacuum cleaner bags off of Interstate overpasses onto passing vehicles. O.K., fine, I get it, Snowpiercer is not for everyone and perhaps some of the cuts should have been made, especially at the end, but for the most part this Sci-Fi work of Korean cinema was most watchable and enjoyable. For you detractors, just view the train as a video game cipher, going from level to level, and you should be fine.