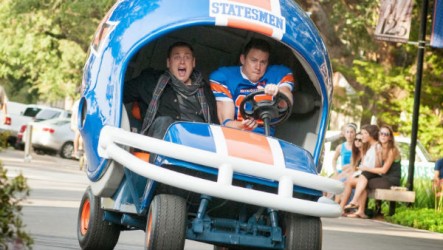 Fair Value of 22 Jump Street: $11.00. 22 Jump Street is a lively police comedy that benefits from an excellent comic chemistry between the leads. In the grand scheme it’s a forgettable flick, but it’s an entertaining reprise of the cop comedy formula.

The Same Thing, but with Twice the Budget: Nick Offerman sets up the central premise of 22 Jump Street: meta-comedy about the tropes of sequels. The story arc is not the point of this film anymore than the structure is the point of a blues song. The police odd couple of Jenko (Channing Tatum) and Schmidt (Jonah Hill) are repeating albeit in a state college setting. One gets pulled towards the fratboy scene, while the other gets into the hookup and bohemian culture. Our heroes are undercover oncemore, trying to find out about a dealer network for a new designer drug which combines adderall and ecstasy- which is really not a new drug by any means, I remember that being a popular cocktail at my college.

22 Jump Street, as compared with it’s peer Hot Fuzz, gives us a study in the differences between American and British comedy. The meta-comedy is more explicitly stated, there is more body humor but less pure absurdity, and there is less cringe comedy and more of an emphasis in comic timing. 22 Jump Street is not as clever as Hot Fuzz, but it’s not as slapstick and pun driven as the The Naked Gun franchise.

22 Jump Street relies most heavily on meta humor, with numerous dialogues and asides between an almost entirely genre-savvy cast. After that, it’s running a lot of mileage out of homotextuality- just raising the homo-erotic subtext of 80s action cinema into a recurrent “they look so gay but they’re not” joke. After that, you have a mix of ‘fish out of water’ jokes, some twin jokes (lots of identical siblings at this campus), and some stoner jokes (the freakout sequence was particularly fun, but too short). 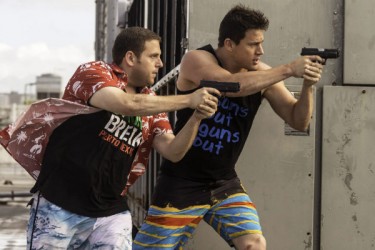 Tatum and Hill do an excellent job of their bickering brotherhood, however. There is no constant straight man in the pair, just an alternation between ‘Dude Where’s My Car’ style toner comedy and the Jonah Hill neurotic/apologetic schtick. They’re also well supported by the other comics of this film. Ice Cube is doing a poor man’s Samuel L. Jackson as Captain Dickson. The Lucas Brothers feature as the stoner dorm neighbors, while Wyatt Russell is the party minded frat leader. And most of all, Jillian Bell shines as the caustic room-mate of Schmidt’s love interest Maya (Amber Stevens). She’s a scene stealer, and I only wish she’d been given more kinds of gags to work with.

What’s the stalest part of this movie? The frat humor.

When’s the funniest part of this movie? The sequence that happens as the ending credits are rolling.