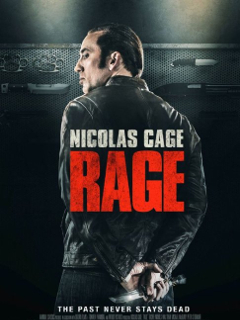 I spent the first ten minutes of this movie transfixed by Nicolas Cage’s hair.

It’s just incredible, really. I couldn’t take my eyes off of it for the entirety of the film, but in those first ten minutes, I understood what Dave saw in the Monolith. It’s ok. It’s alright. I can die now. I have found peace.

Actually, I knew only one minute into this film that I was in for a great night. Look at this face Nicolas Cage makes! Look at it!

You know, I’ve read various reviews over the last several years that make the completely baseless assertion that Nicolas Cage appears in a lot of shitty movies for the money. I don’t know where these people get off insulting one of our greatest living actors like this, but they do. Are they not aware that the man is Hollywood royalty? Did they not see Bad Lieutenant: Port of Call New Orleans? Did they not see Drive Angry? What is the matter with them?

That said, by any objective standard, this movie is total garbage.

But that hair, guys. That hair.

Rage is a movie about rage. Its alternate title is Tokarev, presumably because it is also about a Tokarev. The Tokarev is not raging, however. As a gun, it is an inanimate object incapable of feeling such emotions. No, the Tokarev is an instrument used by those who are raging to express their rage. In spite of this, Nicolas Cage’s character seems to prefer knives to guns, and the titular Tokarev is never used. This is a fantastic film.

Nicolas Cage is raging because his daughter was killed. He used to work for the Irish mob, but has since become a respectable businessman. Danny Glover shows up for no apparent reason as the cop investigating the kidnapping-turned-murder. Cage teams up with two old friends from his criminal past and together they start shooting up the underworld in their quest for the truth. Who killed his daughter? Who is going to pay?

Who cares? Look at that hair!

The above screenshot is from a tender, emotional scene where Nicolas Cage’s character deals with the death of his daughter. Throughout the whole scene, I could only think of one thing: would the Illuminati “Pyramid with the Eye of Providence” from the back of the dollar bill fit into Cage’s hairline? I’m pretty sure it would, as it looks like an equilateral triangle would fit in there, but we must remember that the top of Nicolas Cage’s head is curved. It’s not Euclidean space, but elliptical. I haven’t had a chance to do the math yet; I’ll get back to you with further developments.

Anyway, this is a Cage Flick, if you couldn’t tell. That’s a term that has meant different things at different times, but nowadays it tends to involve a story where a family member (usually a daughter) is kidnapped or killed and Cage is out for revenge. The high point of this era of Cage Flicks was Drive Angry, which was the best film of 2011 if you didn’t see it. Now, though, it’s devolved through movies like Stolen into films like Rage. If there’s one word that describes Nicolas Cage in Rage, it’s “tired”. He’s just like, “Fuck. Another one of these RedBox classics?” We feel your pain. Hell, the movie even includes this scene where Cage helplessly looks at the script, trying to do anything but open it and start reading:

I think it’s time for the Cage Flick to reinvent itself. It’s done it before several times; if you recall, the Cage Flick came into being around the time of Leaving Las Vegas, as Cage appeared in a variety of action films like The Rock and Con Air. The high point of that era, as we all know, was Face/Off, a film so awesome that it featured a cameo appearance by Joe Bob Briggs. The first era of Cage Flicks generally featured Cage as a guy in over his head trying to save the world. He wasn’t a conventional action hero, and he may have had a sordid past as in Gone in Sixty Seconds, but he had a good heart and he always prevailed in the end.

From there, the Cage Flick transitioned to its second phase, heralded by the release of National Treasure, and exemplified by films like Next and Knowing. In these movies, Cage is a genius who understands something that the other characters do not, and he finds himself in a race against time to uncover the truth before bad things happen. The movies feature intrigue, suspense, and gratuitous appearances by Jessica Biel. Above all, though, they feature a lot of running. Nicolas Cage runs, and he means it.

Finally, the Cage Flick came into its current form with films like Bangkok Dangerous, where Cage is out for revenge. Shit is real, and people are going to pay. You fuck with the Cage, you get the horns. There’s less running because Cage is past that. That’s so last era. Now, he walks like he means it. As previously stated, Drive Angry was the high-water mark of this era, and Ghost Rider: Spirit of Vengeance stands as an avant garde deconstruction of it. In other words, this era has concluded, but they keep making movies as if it’s still going.

Oh yeah, check out Cage’s angry face there. It had me laughing for like 20 seconds.

Anyway, it’s time for a new kind of Cage Flick, guys. This just isn’t working anymore. Nicolas Cage’s hair is supposed to add color to the proceedings. When laughing at his hair is all there is, it’s time to move on.

Still, there’s a lot of content in that hair, and Nicolas Cage makes this movie worth watching because of it. If that isn’t the sign of a great actor, I don’t know what is. The film itself is so depressing and boring that I’m glad Cage had the foresight to give us something to talk about. So, I’d like to spend the rest of this review sharing the remaining screenshots I took with all of you. Let’s take a look at a side view:

Now, I know what you’re going to say: it looks like a black Pac-Man melted on his head. It’s true, but did you notice the absence of any Power Pills? No wonder the black Pac-Man died. There’s a lot of sadness in this shot. I think I may need a moment to collect myself.

For some reason, they had water on the camera lens during this scene and didn’t bother to clean it. So this entire sequence is slightly blurry, and the technical incompetence behind the scenes on this film obscures the majesty of Cage’s flowing mane. This is up there with Vic Morrow’s death on the set of The Twilight Zone in terms of horrible filmmaking, and everyone involved should be ashamed of themselves.

I’ve been looking at this picture for at least five minutes straight, and I just cannot understand what’s going on. Every time I look at it, my eyes inevitably fall on the part on the top of Cage’s head to our left where the white of the window meets the skull. I just start giggling every time.

Finally, here’s a great shot of Nicolas Cage composing himself before delivering more dialogue in this film. Sometimes, you just need a moment, you know? Just close your eyes, imagine the paycheck, and do it.

So anyway, are you guys pumped for Left Behind? Bring it, Nic. I’m ready.