Home / Reviews / Movies / 80s Action / Every Predator Movie: Is too much of a good thing a bad thing?

Every Predator Movie: Is too much of a good thing a bad thing? 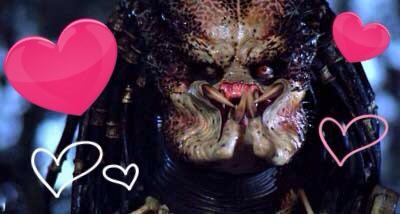 Every Predator Movie In One Sitting:

Recently, while having dinner with friends, the conversation turned to favorite movies. Godfather was a popular answer. One friend said she loved The Age of Innocence. Some couldn’t name just one movie, and listed their favorite two or three. Cool Hand Luke! Blazing Saddles! Tombstone! Then everyone looked at me.

“SERIOUSLY? PREDATOR? PREDATOR??! But you have such great taste!”

Seriously, Predator! I don’t remember when or why it became my favorite movie, but at some point my brain moved it to the top of the list. A lot of my friends think that’s pretty funny, and they’ll text or tweet me to let me know when it’s on TV (which is, like, all the time. How many other 27-year-old movies are on TV so frequently?). Some friends even go so far as to let me know about exciting Predator-related offers! 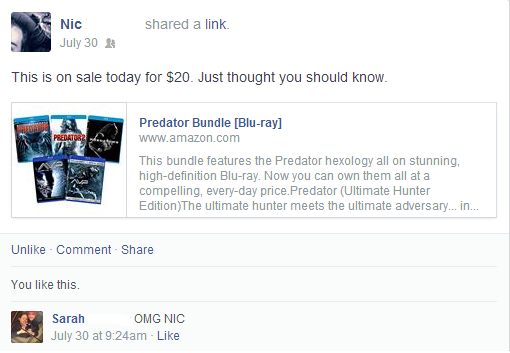 OMG is right! I considered the offer for a while. Did I really need all 5 movies? I already owned Predator on Blu-Ray, and the rest of the movies are, well, not my favorite. But then again…$20 for all five? On Blu-Ray? Was it worth it, even knowing that I’d end up with the incredibly terrible AVP: Requiem? Yes. It was worth it. And I have to admit, I was pretty excited about my purchase – and then, inspiration struck. Why not watch all 5 movies in a row? Predator rules, and it would only take about 8.5 hours. How bad could it be? 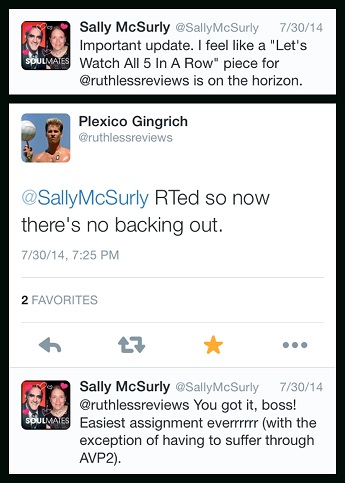 What a fool I was. 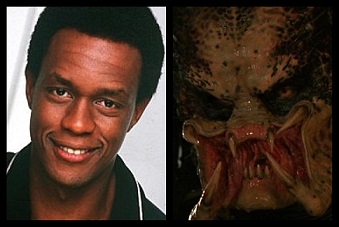 My Predator Bundle marathon began at 11:30am. I was settled in on the couch and ready to watch my favorite movie for the god-knows-how-many-th time. Right off the bat, I noticed something: Predator looks crazy good in HD. I hadn’t really considered that before, because I’m usually just watching it on whatever channel it’s on (usually a non-HD channel). But trust me – even the opening scene where the spaceship drops Predator off for his weekend hunting trip looks amazing. You know what else looks amazing in HD? BILL DUKE’S FACE.

Everything about this movie is great. The goofy catchphrases. The scenes written exclusively to give the actors a chance to show off their muscles. The score. Billy’s laugh. Mac whisper-singing “Long Tall Sally.” Blain dying early. It’s all good. Why did my friends think I was crazy again? They’re the crazy ones.

Movie #1 was a breeze. All I needed was some pizza and hot wings, which were prepared with love by Domino’s Brandon (I tracked my order, naturally), and were delivered in the middle of a monsoon by my hero, Erich, at 1pm. I watched Bill Duke’s head get turned in to jelly (oh – spoiler?) while partaking in my delicious lunch, and reveled in the fact that this was going to be the greatest day ever. 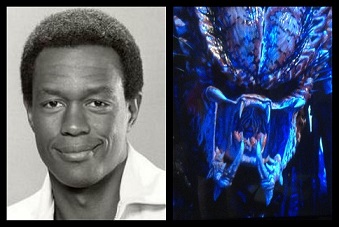 Predator 2 has always just been an ok movie for me. Sure, the idea was cool – Predator likes to hunt in places that are hot and marred by conflict, so instead of a jungle, how about he goes to Los Angeles! I have to say that the film’s vision of 1997 Los Angeles has always seemed ridiculous to me. Of course there are bad parts of any city, but the idea that the entirety of L.A. had devolved into a fiery hellscape is a hilarious concept. One thing they did get right – the heat! Everyone in this movie looks like they’re melting, especially Danny Glover. A little fun fact that I may or may not have invented: the working title for this movie was, Danny Glover Sweats Profusely and Breathes Heavily for About 2 Hours, and Also Predator.

Practically everyone in this movie is an asshole, so I guess that’s one other thing about L.A. that the writers nailed. The gang violence angle always seemed tiresome to me, and let’s be honest – the voodoo angle is corny as hell. But there are some really great things about Predator 2:

Two Predator movies down, three to go. This was fun. 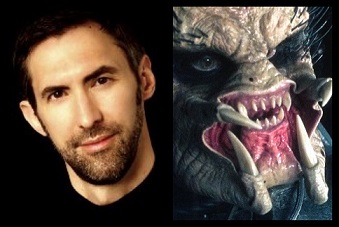 I’ve never minded AVP. Maybe it’s because the protagonist is a lady (Sanaa Lathan, because why not!). Or maybe it’s because we were finally getting a movie version of the arcade game that we’d been playing since the 90s. Or more likely, it was because it had been 14 years since we’d heard from my boyfriend, Predator. Welcome back, handsome! The premise was ok – doomed humans discover a pyramid in Antarctica (!!!) where Predators come to occasionally hunt aliens. But something was different about these Predators – they were HUGE. Like, Predator spends all his days off at the gym huge. Gone was the late Kevin Peter Hall’s gracefulness, which was pretty remarkable, considering he was 7’3″; instead, we got some big-ass dudes who were sort of clunky and stomped around the pyramid like a couple of bros.

I was given the option to watch the unrated version of AVP (who knew?) and in case you’re wondering, “unrated” means, “we put a couple of pointless and bad scenes back into the movie, and also there are maybe one or two moments that are slightly grosser.” Just watch the theatrical release, if you’re so inclined.

A couple of points about AVP: 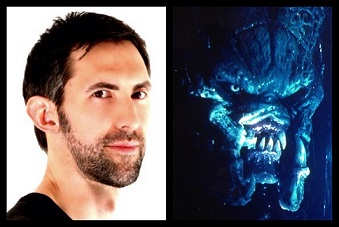 I’d only seen AVP2 once, when it was first released, so I didn’t remember much about it other than the fact that I hated it. It’s hand’s down the worst of the entire series, but it’s also the shortest, thankfully. Still, as I was putting the disc in, I started laughing and said, “Oh my god, I still have two movies to go, and one of them is horrible.” This was the point where I really started to rethink this whole, “Watching all five in a row is going to be so cool” plan. The problem was simple – as the first of the franchise, Predator is obviously the best; but watching it first was like eating dessert before the meal. It was all downhill from there.

For those who have been spared the misery of AVP2, let me break it down for you. Our good buddy Predator who died at the end of AVP had actually been implanted with an alien baby, and because xenomorphs take on the characteristics of their hosts, we got a fucking weird alien/predator hybrid for AVP2 that looked like a giant Jamaican lizard. Jamaican Lizard attacks all the other Predators, which causes their ship to crash-land in…Colorado? Sure, why the hell not. Colorado it is. We learn that the Predator ship was carrying the little spider aliens that impregnate hosts, and once they’ve crashed back on Earth, the little fuckers get busy attacking a man and his little kid. That’s right, the producers of AVP2 had absolutely zero qualms about an alien bursting out of a little kid’s chest. Meanwhile, back on Planet Predator, our hero (?) receives a message alerting him to the crash, so off he goes to clean up the mess. This movie is essentially CSI: Space Monsters. My dude is investigating the crash, hunting down aliens, and taking the occasional break to kill and skin humans. Hey, everybody has a hobby!

AVP2 has it all: a pretty stupid story, weird kids, horny teens, moody dudes with a troubled past, a-hole goons, and action scenes that were poorly lit so you can’t fully appreciate how shitty they are. I was starting to remember why I hated this movie so much! But that’s not all – this version was also unrated, so I got to see the Jamaican Alien impregnate already-pregnant women (we’re talking almost-in-labor pregnant women), and then a bunch of little alien babies burst out of their wombs! Someone remind me if that was in the theatrical version, because I honestly don’t remember. BUT HOLY SHIT, YOU GUYS. At this point, I wanted to barf, because of that scene and the food I’d been eating all day. 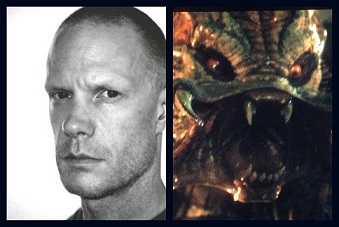 Brian Steele as Predator, who now looks like a fish or lizard, but with an EXTREME mouth.

At last, the homestretch. I couldn’t believe I still had one movie to go, but I also couldn’t believe how annoyed I was at the whole process. I love Predator, and this was my idea! What was wrong with me? Had I fallen out of love with Predator?

Predators is a decent movie if only for the fact that it tricks you into thinking that AVP and AVP2 never happened, even if you did just suffer through them. What’s more, it gets back to the original idea behind the first film – Predator is a good ol’ boy from outer space who just like to go hunting. This time, however, he had the luxury of going to a legit game preserve on a planet other than Earth. Screw you, Earth! There were a few other differences this time:

There are plenty of parallels between the first movie and this one.  Brody, as the grumpy, grumbling Royce, is Arnold’s Dutch, for all intents and purposes. He’s the leader of the group, and kills the Predator at the end. In fact, you can link just about every character in Predators to a character in 1987 Predator. Isabelle = Anna, Hanzo = Billy, and so on. Of all the sequels, this feels the closest to the original, if only because most of the overdone bullshit that plagued 2-4 was stripped away for 5. Sometimes Predators is my second-favorite of the franchise, sometimes my third-favorite. Depends on the day. And after the misery of suffering through AVP2, it was a good way to end what had surprisingly become a day of mind-numbing torture.

Wonder how I’d fare if I watched all the Star Wars movies in a row? Perhaps I’ll save that challenge for another day – far, far, far into the future.