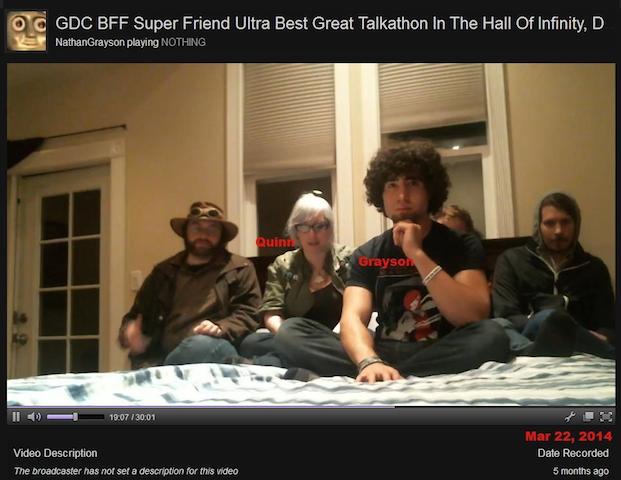 Zoe Quinn: Literally in bed with game journo who covered her work.

(UPDATE 8/22/14: Bill Zoeker of Destructoid appears to have had an inappropriate relationship with Zoe. In addition, the number of people in games “journalism” who are financially supporting Quinn through her Patreon is beyond ridiculous.

Additionally, Greg Tito, editor-in-chief of the Escapist, has flat out admitted to running single-source stories without fact checking to “create change,” and always defaulting to taking the side of/defending the person making allegations of abuse. Literally, this supposed professional said, “there is no burden of proof on someone who is being hurt.”

Is it okay to financially support the very people you are supposed to provide “unbiased” coverage on? Should the EIC of a major gaming site be acting less like a cynical newsman and more like a fucking therapist? Games journalism has been a joke for a minute now. In any kind of sane world, this would be the last straw. If you’d like to let Zoeker, Tito, or any of the other frauds on Twitter know how you feel about their buying advice being colored by agendas and cronyism, why not go ahead and do that? The floodgates are open on this one.

More as it breaks. Thanks to Chris Swaggar from Gather Your Party for the tip.)

Bear with me, folks, because this one is a soap opera.

Over the weekend, it came to light that Depression Quest developer/Self-Appointed Patron Saint Of Social Change And Awareness In Gaming Zoe Quinn was cheating on her then-boyfriend Eron Gjoni with as many as five guys at one time. In his long post (seriously you guys, it is loooooooooong), Eron provided plenty of evidence to corroborate his story  chat logs, tumblr flirtations, even photos of himself with Quinn that look very much like post-coital relaxation. Further, the way in which this story was written is authentic  it reads very much like the account of a jilted lover having something of a minor break with reality, and to be absolutely clear, the dumped party comes off as less than sterling. If anything, the true tragedy of this relationships fiery, public, explosive end is that Zoe Quinn and Eron Cuckolded By Zoe Quinn Gjoni are both back on the market, ready to inflict their lunacy upon their next unassuming partners.

Why is who a crazy (she is literally mentally ill and rose to Internet celebrity by making a non-game about same) indie developer sleeps with worthy of a post? The first reason is because Zoe Quinn is a standard bearer for a particular brand of insufferable within the gaming community. Shes at the vanguard of advocating for social justice issues, gender equality and other assorted things that have exactly zilch to do with Actual Video Games. From all evidence, Zoes let this go to her head, even begging the jilted boyfriend to not tell the spouse of her married boss whats up, lest games as a whole loses her special snowflake voice for equality. The irony of one of gamings staunchest advocates for mental health issues engaging in behavior that is absolutely destructive to the real-world mental health of others is too delicious to ignore, and so ignore it we wont.

With that said, Id like to get to the second reason, the main reason Im covering this on Ruthless Reviews: When I started writing for this site, one of my goals was to bring a touch of integrity back to the fetid hell known as games journalism. Its an impossible task, perhaps, like an ant pushing a boulder up a mountain, but by god, I intend to try.

When Eron posted his disjointed rant, he didnt just lob accusations, he named names. Names like developer Robin Arnott, names like Joshua Boggs, Zoes married boss (at the time) and creator of Framed. But the true centerpiece here is that, according to Eron, one of the people Zoe Quinn cheated on him with was none other than Nathan Grayson, Kotakus newest hire. Before jumping ship, Nathan used to write awful games-is-social-justice garbage for Rock Paper Shotgun. During his time there, Nathan called yours truly a cretin among cretins. I took it as a compliment then, and even more so now.

Point being: Nathan wrote articles about Depression Quest. He wrote these articles as a professional. He was paid for these articles. He advocated the game to his audience and his followers on social media. He elevated its profile through his soapbox. And  most importantly  he did this all while failing to disclose the fact that he had fucked Zoe Quinn. No longer is the idea of game journalists being in bed with the developers they cover a mere metaphor  these two have made the shit they all roll around in quite literal. 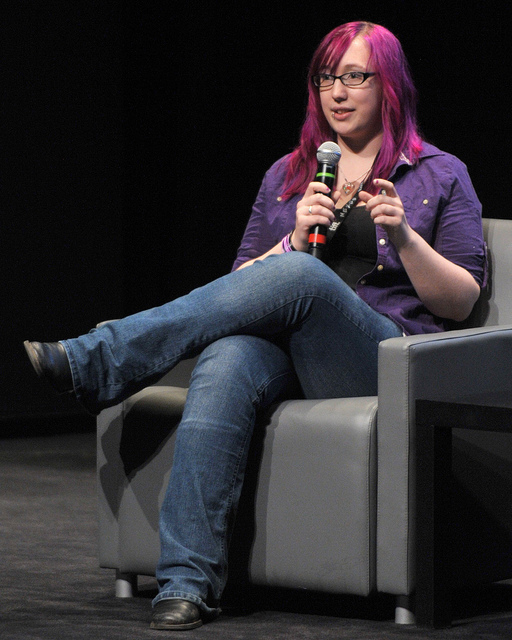 Only in games journalism is THIS worth your professional credibility.

Because of the implications for the racket, it is likely that this wont be covered by many of the games press. Even as Kotaku has been forced into at least acknowledging the issue to protect their bottom line, the rest of the usual rags are protecting each other (and their jobs). As such, threads about the issue have been promptly glassed from Giant Bomb, Reddit, and NEOGAF, among others. Quinn herself has gotten Youtube videos explaining the situation pulled under DMCA for including fair-use screenshots from her game. If it were anyone else, games writers across the web would have piled on with clickbait articles defending Zoe Quinns right to sleep around (even while in a supposedly committed relationship). But because Nathan Grayson is involved (along with at least two as-yet unnamed others), few in the clique world of game journalism are going to touch this one.

Its a problem  by not recusing himself from any and all coverage of Zoe Quinn, or at least being upfront about their relationship, Nathan Grayson committed a huge violation of journalistic ethics. However, as much as I loathe giving the benefit of the doubt to a games journo hipster literally caught with his pants down, I find that I must. For the life of a rank-and-file game journo gives few pleasures and the road is lonely: drunk off our tit on all the free publisher-comped booze we can drink, who amongst us would be above picking up some last-call sadbrain special with the always-changing neon hair? A big part of integrity is transparency, and it is in this spirit that I am now openly disclosing the going exchange rate of sex acts for positive game coverage here on Ruthless Reviews. Like any currency, there are always fluctuations, but these should serve as examples of how much perversity is expected for positivity. Also note that these examples also reflect that attractiveness of individual developers will be taken into account.

8/10: Stevie Case sucks it down while I play through review code of Daikatana 2: Dai Harder.