Its been almost a year since your last Shithouse entry. What brought you back?

Safeway. Saturday night. Just chillin, like a man do. Curiosity being what it is, I checked out the Redbox machine. The usual crap passed on by, until I hit yet another take on the Lizzie Borden legend, this time with Christina Ricci. I gulped. Yes, I had already reviewed a Borden movie, and I really couldnt bear the thought of another. But Ricci! There was a good chance of seeing tits. Hell, a great chance. But before I could commit, it appeared. It being a movie starring Halle Berry as a 70s-era stripper who has dissociative identity disorder. More than that, one of the personalities is a racist white woman. I checked imdb. Bad reviews galore, but more than that, a $700,000 box office. Completely ignored, this fuckfest. Without a chance of anyone having seen it, I made the call. This would mark my return.

Halle Berry? The Oscar winner? In a movie that made less than a million dollars?

It seems inconceivable, but ever since winning the Academy Award for Monsters Ball, Halle Berry hasnt done shit. Well, nothing but shit, actually. That is, when shes working at all. Might this mark her flagging careers second act? It might, were it not for the bad script, bad direction, and shopworn story. Perhaps Im being too harsh. After all, who wouldnt want to see a woman like Ms. Berry tearing apart scenery like some chocolate Sybil?

Before you say something you cant take back, consider: the movies central theme  its very lifeblood  is that interracial relationships drive you mad. And if youre a black woman who gets impregnated by a white man, that man will die  horribly, at his moment of triumph  and you will later give birth to a baby who gets stolen by your Mama and likely killed. No exceptions.

Wait a minute. You said Berry was a stripper in the 1970s. Interracial relationships were pretty much accepted by then, right? Why all the fuss?

Yes, batshit Berry is in the Me Decade, but there are flashbacks involving a very racist Georgia, 1950s-style. You see, Something Happened way back when, and well spend almost two hours finding out what. Well, maybe you wont, but I had to, so here we are. 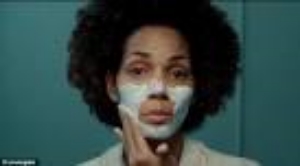 Since Berry is a stripper in a decade when at least 3 in 4 American women gave it a shot to make ends meet, Im assuming there are tits.

Not even a peek, my friend. Unconscionable, given that the movie begins with a half-naked Berry dancing in a cage. But somehow, she insists on her dignity, even though she accepted this role knowing full well its lone viewer would be some nerd renting the pristine, unplayed DVD on a Saturday night. Swordfish, this aint.

Fair enough. Get on with it.

Lets get one thing out of the way first. This movie had nine writers. NINE. Funny how All About Eve and Network had but one each, while Frankie & Alice had enough scribes to fill every last chamber at the Supreme Court. So yes, it took nearly a dozen minds  adult minds  to pen, Wall Streets going down, dicks are going up. A baseball team of bards to give us, Oh I know its Whitman Hes a racist fag. A respectable family gathering to insist that Halle Berry would sell her underwear for twenty dollars. A hair shy of a ten spot to crank out, Doc, you got them Ding Dongs?

Ive heard worse. So who is Frankie, really? I mean, a crazy-ass stripper aint exactly a Korean John Holmes.

Frankie is a woman with a past. While she shakes her ass for drunken crackers in 1973 Los Angeles, shes running away from her demons. Not unlike every stripper who ever lived. But as shes about to lay down with the worlds most muscular brother, she steps on a toy. The toy triggers a memory. She retreats into her childhood, and is suddenly overcome by rage. She damn near kills the man, stumbles down the hall, and ends up unconscious in the street. With that, the story begins. A story of repressed pain, killer Mamas, forbidden love, and the unheard of concept of a tortured psychiatrist.

And thats where Stellan Skarsgard comes in.

And thats where Stellan Skarsgard comes in. Hes a lonely, newly divorced doctor who needs something to believe in. It would be the Robin Williams role if Robin Williams were still alive.

But the film was shot in 2008. Williams was available.

He was not available.

Fine. So does the sad doctor strike up a romance and once again find the will to live?

Shockingly, the good doctors cock remains tucked away. This isnt about sex, but the drive to find out what makes this sick woman tick. There will be crazy theories his colleagues reject. There will be late night bull sessions involving a chalkboard. There will be a behind-the-back discharge that leads to the doctor storming into a meeting and confronting a co-worker, who cries, Cant this wait until Im not in a meeting? Further, there will be visits to Frankies Mama, where she lies about the shit she done, until a conscience-stricken sister reveals the truth. There will also be a stripper who has to brace herself against the wall because she finds Stellan Skarsgard super-sexy.

So who is Alice?

Alice is a child. Well, shes the child within Frankie. The child she lost. Sorry  the child who was stolen away by Mama and killed on a rainy night in Georgia. She also has bad eyesight and a 153 IQ.

A stripper with a 153 IQ? I heard about that on a Motley Crue record, I think.

No, the young girl. The girl who never lived because she was a son who was killed by Frankies Mama. Shes where Frankie retreats when the pain of losing a child becomes too unbearable. Its the key to the whole damn mystery.

The mystery of Mister Pete, the white man who died while taking Frankie away from racist Georgia. But the girl is not Frankies first choice of personality. No, that is the Southern White Woman. Speaking like Blanche Dubois, this personality hates Jews, crashes weddings at the site of RFKs assassination, and may or may not be Berrys full throttle effort to get another Oscar nomination. But her presence in Frankies psyche is never fully explained. Not like it has to be, given that there were nine fucking writers. Or did I mention that already?

Okay, is there the scene known as The Big Session? You know what Im talking about.

Glad you asked. So the film is winding down. Still a lot to cover. We need the grand reveal, better known as The Big Session. Its what the cinema believes therapy to be, only its never actually occurred in real life. I mean, Woody Allen has been seeing a shrink for 67 years and still hasnt had The Big Session. Doctors live for it, but most die while waiting. Here, we get it after less than 30 days of treatment. Frankie takes a seat. She starts to sweat. She heaves, then groans. She bucks, then curls into the fetal position. Another roar, and more sweating. Shes simulating labor! She runs from Frankie to Alice to Mama. A little Southern White Woman to keep us honest. More bucking and heaving, then a flashback. Its a seedy motel in 1957. Legs spread wide, Mama waiting. Get that thing out of me! Its a baby. A white baby. Mama is horrified. It appears to be alive, only Mama insists that its dead. She folds it into a blanket and darts away like Barry Sanders against the Packers. Frankie gives chase. Where Mama go? The baby is never seen again. That baby was Frankies hope. More so after Mister Pete the White Lover got killed. Now hes gone. College, marriage, family, all poof under a cloud of thunder and rain. Shes exhausted. The doctor has what he needs. Hell find a cure for this sad, tormented woman.

So does Mama ever admit that she killed the child because it was the product of sin? And white?

Im fairly certain that none of this makes any sense.

The movie had nine writers. It was filmed in 2008, then briefly released five years later. It made $700,000. Halle Berry has sued Codeblack films to have it taken off her resume while leaving Catwoman firmly in place. My friend, sense never even sat down at the table.

Do you regret not getting the Christina Ricci movie?