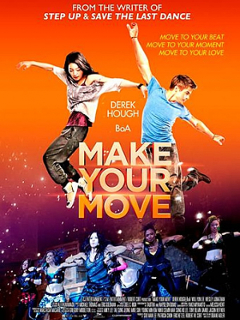 The Rhythm Nation falls. Or rises. It does something, at least.

You know that feeling when a woman looks deeply into your eyes, her loins aflutter with longing, her mind racing with visions of standing by the altar, her heart telling her that she will love you forever?

Still, they keep making movies about this topic. I’m not leveling a criticism here; it’s no more ridiculous than the endless procession of films featuring men in tights kicking mad scientists in the face. In fact, the dance movies are probably better at hitting their goals than the superhero films are. Much like the Fast and Furious series, the dance films know their target audience, know what they want to see, and know that at the end of the day, it’s pretty hard to fuck up a dance movie. Make Your Move doesn’t fuck it up. That’s high praise in this age of atrocious bullshit backed by nine-figure budgets.

Anyway, Make Your Move is an entry in the Step Up genre. Frankly, they could have just made this Step Up 6 (or whatever number they’re up to with those movies) and called it a day. In place of Channing Tatum, we have Derek Hough as Donny, who plays “the white guy”. Also featured in this film are Donny’s foster brother Nick, aka “the black guy”, Nick’s estranged business partner Kaz, aka “the Asian guy”, Kaz’s dancing sister Aya, aka “the Asian girl”, and the controlling Wall Street investor Michael, aka “the douchebag”. See, money knows no race. There are no races. There are no nations. There is only capital and an inability to dance.

Remember that “dancing” = “fucking” in these movies, so Michael’s inability to perform any move beyond the “white boy head bob” is a metaphor for his inability to perform sexually at a level that will satisfy a woman. This is what makes his threats of marrying Aya so terrifying. Could you marry a man who is always one Smash Mouth song away from doing that “fists spinning around each other” thing? Oh God, just thinking about it makes me sick.

Aya’s white knight Donny rides in to her rescue. He’s a man recently released from a two-year period of incarceration that skips his remaining six months of parole to visit his brother in Brooklyn. The brother runs “the hottest underground dance club in Brooklyn”, which is called “Static” for some reason. Donny figures that if his PO won’t let him dance on the streets of New Orleans, he’ll go spend a week or two dancing on the streets on an entirely different city. It will all work out, because he’s in a movie! In a hilarious twist, Donny admits to Aya that he went to prison for dancing as part of a distraction for various thieves and other ne’er-do-wells. His sin was that he used the power of Dance for evil. You were the Chosen One!

Aya is a girl of Korean ethnicity born in Japan. Her brother Kaz had a falling out with Nick due to some business dispute about the streets, etc. Kaz now runs a fancy club with Michael, who owns 51% of the club in typical douchebag fashion. Michael keeps trying to force Aya into marrying him, working exclusively for his club, and other nonsense. His only leverage is that Aya’s work visa is about to run out in three weeks, and his fancy rich asshole contacts can fix the paperwork instantly. Can’t she just wait until Obama flips over his Reagan Trap Card and declares amnesty? I’m not sure this Michael fellow has thought his plan through.

So Make Your Move is basically a Western updated for the modern day. A drifter rides into town and rights all of the wrongs. The evolution of the Western has been discussed at length elsewhere, and I don’t bring this up in an attempt to sound profound. Still, it’s interesting that the Western initially evolved into genres like the 80s Action film, where everything was crazy, bloody, over-the-top, and the bad guys were always in it for the money. Today, the action film has mostly devolved into PG-13 family-friendly nonsense, where blood ceases to exist and the villain’s motivations tend to be personal rather than political. The villains of old, who ruthlessly exploited the working class of whatever backwater town they dominated, have long since been replaced by guys who either hate the hero or just want to detonate a nuclear device for reasons unexplained. The shift in action film stories mirrors the turning of America’s back towards the working class of the country.

What I’m trying to say is that I discovered while watching Make Your Move that films like this carry on the Western tradition better than most modern action films. I don’t know how this happened. But Make Your Move does hit all the same notes, with businessmen depicted as fake and exploitative and America as a Land of Dreams where those dreams could be better realized without the businessmen’s (or the government’s) involvement. Sure, it lacks the blood, one-liners, and gratuitous face stabbings of classic 80s Action, but the movie never pretends to be an action film in the first place. It’s a dancing movie, and watching dance numbers is a lot less offensive than watching a 20 minute action scene where no squibs erupt and the hero falls 10 stories without a scratch. You know, because he’s a superhero.

Then again, maybe I’ve just gone crazy. I have been working too much.

Anyway, Donny courts Aya by entering her impromptu dance number at Static, visiting her dance class, and finally taking her out to dinner. I must admit that I was kind of confused, because I thought any conversation with an attractive woman who hails from Japan was supposed to go straight to talking about hentai tentacle rape after the customary two second pause. Seriously, what’s up with that? Questions must be answered. I know the actress is South Korean, but whatever. For his part, Donny waits the two seconds, but then talks about how beautiful her eyes are or something. I’d say he was doing it wrong, but I guess he gets the girl at the end of the movie. Perhaps I am mistaken. Is this why I don’t have any friends?

There’s more dancing, but I don’t want to give anything away. I was on the edge of my seat during the dance numbers! Are they going to successfully dance? Oh, it was just harrowing.

In one hilarious moment, though, Donny and Aya do a dance to take each other’s clothes off prior to fornication. This is one of the best “having another activity stand in for fucking” scenes since Arnold’s “loading up” scene in Raw Deal. If there was any doubt that this was an 80s Action film without the 80s or the Action, let it rest.

We’ve survived Canada burning down our White House, a Civil War, the Great Depression, Nixon’s second term, and George W. Bush. We’ll survive Obama and this Great Recession. We will rise again. And we will dance!

(Note: Not valid in the 50 states, the District of Columbia, Puerto Rico, American Samoa, or Guam. The Virgin Islands get a pass, though.)