The Secret Meaning of Pac Man

Pac man is a video game intended for the entertainment of children and teenagers. But, with the bright display, ceaseless action and challenging play, do not be surprised if even the head of the household takes a turn or two for himself.

The player finds himself in the role of a Pac Man, an embodiment of the majesty and genius of capitalism. His design is sleek and purposeful. He travels through a maze, consuming resources and creating revenue. The goal of the player is to discover the most efficient path through the maze so as to maximize revenue.

Would that it were as simple as that! The nobel Pac Man is beset by ghosts–the spectre of communism. Obviously, should each ideology compete on merit, the game would be too easy to be any fun. The makers of the game have therefore created four ghosts to team up on Pacman, so that the competition is challenging.

Each ghost has a different name and color so as to represent a particular aspect of the Communist menace. Pinky is, of course, an all purpose stand in, perhaps suggesting the Soviet Union. Inky represents the subversive elements within the press and academia. Blinky, colored red, stands in for the Chinese. Clyde is the traitor or infiltrator within the western world. 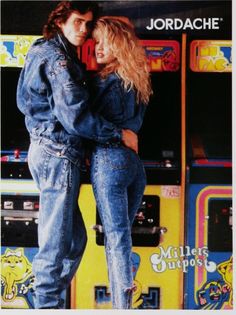 Esteemed Prognosticators Say That Visits To Video Games Arcades Could Become A Regular Part Of Courtship.

Pacman is killed when one of the ghosts comes into contact with him and so must constantly flee them as he penetrates the maze. There are, however, four points which possess a radioactive glow, representing our nuclear supremacy. Once Pacman uses one of the nuclear weapons on the ghosts, they glow with radioactivity and he is able to make them his supper.

The poisonous idea does not die with the man in the game, any more than the Communist ideology is wiped out with the eradication of one band of insurgents. When the ghosts are consumed, their eyes, symbolizing their worldview, float away and are tragically passed on to the next generation of ghosts.

The ghosts are not men of principle as they are driven by ideological fanaticism and so lack all scruples. In several instances, I thought my play warranted a successful outcome but I instead met my demise because of some Communist ploy. These defeats were especially frustrating, but remind us to remain vigilant.

Im pleased to recommend Pacman for American households. It shall be a welcome change from other detritus of the popular culture, which so often imparts dubious messages and values. Teaching young people to align and struggle with freedom against the persistent threat of Communism is a laudable framework for high entertainment.