Martin Folse : Destroyer of the Community.

Every village has an idiot, but usually that idiot doesn’t own a television station. My village is very special. The local channel that serves my community is owned by one of the most buffoonish men to reside south of I-10. Citizens of my community are regularly given front row seats to witch hunts orchestrated by a man I would characterize as Geraldo crossed with Glen Beck. Let’s just say his spirit animal is the dung beetle and his astrological sign is Benghazi. 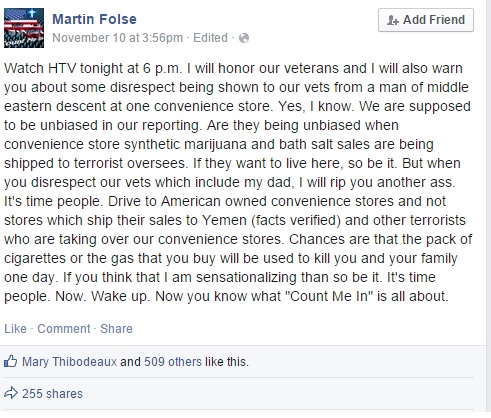 Martin, threatening to rip new asses on those who disrespect his daddy

Meet Martin Folse, the king of HTV. His latest blunder happened last week when he took to the airwaves saying that a clerk at a local convenience store called all veterans assholes. Martin then went on to explain that this store was owned by middle easterners, and that every dime spent there was being funneled to terrorists across the globe. What happened next was predictable: dozens of people began picketing the store, spouting xenophobic ignorance, and beating their chests while passing cars honked in support. 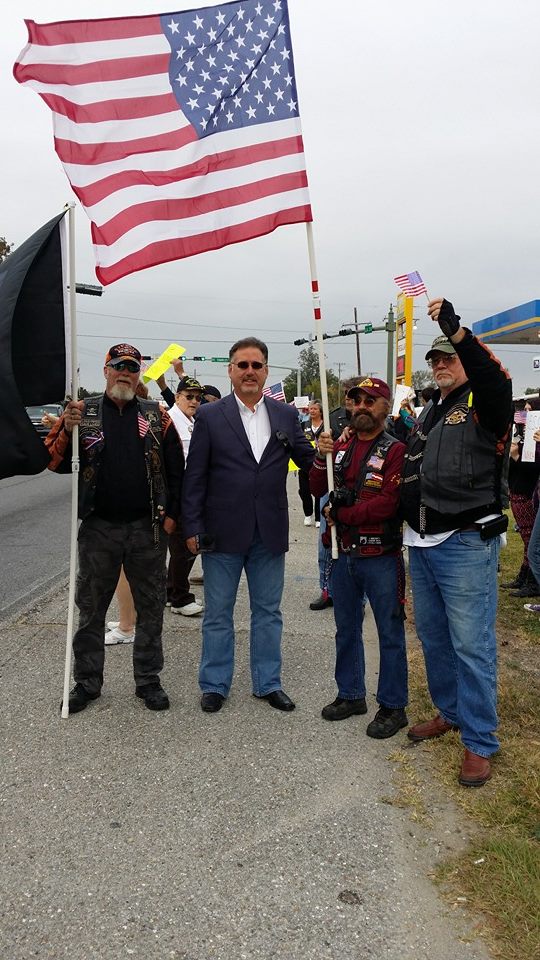 Come on, you know the fake biker crowd wasn’t going to pass something like this up.

As the truth slowly started coming out, Folse still refused to budge. You have to stick to your guns or Obama will take them I guess. It turns out that the store wasn’t owned by middle easterners at all. It’s owned by a Vietnamese man who came here when he was four years old because his family was fighting communism. The clerk is actually from Nepal, which makes him Asian even though he is brown. He says he never called all veterans assholes. He didn’t even know what a veteran was until recently, as there is no word for veteran in Nepalese.

Despite this, Folse and his supporters said that this gas station had “ties to Yemen.” To understand where this allegation came from, we have to rewind a few years to when bath salts were deemed illegal. Martin dedicated a lot of coverage to a sting where an unrelated group of people distributing bath salts were arrested. Some of them were middle eastern, and a law enforcement agent said that one of them had “ties to Yemen,” which was all Martin needed to hear. It was the best thing to happen to him since Rogain. He was now given the sensationalized drum of terrorism to thwap with his hurricane stick. The ongoing public access drama written, produced, and starring Martin Folse was heating up. Martin takes on the terrorists! The more dangerous the threat, the more important he becomes. No one stopped to even ask if the suspect was tied to radicalized Islam. It didn’t matter. Yemen is full of brown people, and in Louisiana, that’s good enough. Martin made it clear that every dollar spent on bath salts was being converted into a bullet that would be fired into a Green Beret’s green beret.

He spent a lot of time and resources in an expose about bath salts, gas stations, and foreigners when it benefited his ratings, but he couldn’t drive down the street to ask a Nepalese kid working for a Vietnamese man their side of the story before irreparably slandering them. It’s interesting that Martin sat on the story for almost a week before making his grand accusation. For maximum effect, he waited until the night before Veteran’s Day to unleash his attack on this terror-funding gas station. It was brilliant. He took a day dedicated to honoring the sacrifices of veterans and hijacked it into his own perverted witch hunt. It was all part of his “Count Me In” campaign, which is supposed to be about God, country, and family but is really just a Trojan horse for getting him more publicity. That quest for publicity has had unintended consequences. When WWIII starts, it won’t stem from an assassination or the invasion of a sovereign nation, it will no doubt blossom out of the comments section of a local news story. My town has broken down into two warring factions: one side thinks they are entangled in a life or death struggle against Islam, and the other side thinks that maybe Vietnam isn’t in the middle east.

This is hardly the first time Martin Folse has gotten his hands on footage and milked it for maximum publicity. Last March, two children died in a house fire, and Martin repeatedly aired the footage of the children burning while their mother screams outside in agony. It was absolutely horrifying to watch. In fact, the footage is still on their website. I can only think of one other group that shares videos of people dying, ISIS. Maybe Martin Folse has ties to Yemen. Someone should check on that. Count Me In! 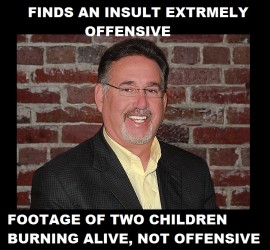 He once got footage of a carpentry teacher at a vocational school bringing equipment home, which was common practice as long as it was brought back in time for students to use. Martin, treating the entire incident like Watergate, decided to humiliate this man over and over on HTV, showing the footage non-stop, calling the man a thief. When Folse had the District Attorney and Sheriff on his program, he ambushed them by playing the footage and demanding, “What are you going to do about this?!” Needless to say, the teacher’s life was turned upside down by something that was common practice and transparent among school officials. The pain and humiliation he went through was unbearable. Martin even showed up at the man’s job, shoving a camera in his face and demanding to know if he took public property. Folse’s harassment was instrumental in the man winning a lawsuit, but the money couldn’t rebuild the man’s reputation. 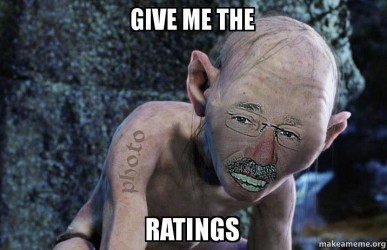 When journalistic ethicist Kelly McBride confronted him about the most recent gas station debacle, he dismissed her accusations, asking her where she was from. He then scoffed at being scrutinized by a foreigner from the exotic land of Tampa, Florida who “obviously doesn’t know our culture here.” He then likened his flagship program, Bayou Time, to The O’Reilly Factor because Bill O’ Reilly spends his show getting prank called by teenagers and listening to senior citizens complain about drainage.

The reason people even have HTV is because of a law that states cable providers must carry local channels. Martin Folse happens to broadcast a very weak signal (I couldn’t get it when I lived five miles from his station), which forces cable companies to carry HTV because it is tasked with informing the public. An added bonus for Martin is that he also gets to charge for advertising. The veteran who told Martin he was insulted at that gas station just so happens to have a business that frequently advertises on HTV. When it comes down to it, a man of Martin’s mettle didn’t stand a chance. He could either appease an advertiser in the name of patriotism to gain publicity, or he could just not slander a minority-owned business that contributes nothing to his advertising revenue. The choice was made for him before the earth was even formed. You can get very far in America taking advantage of minorities, or at least you could. Folse probably didn’t expect the kind of backlash he received because he thought if you wrapped a turd burger in patriotism, the people of south Louisiana would eat it right up. Unfortunately for Martin, many of us smelled shit through the wrapper. 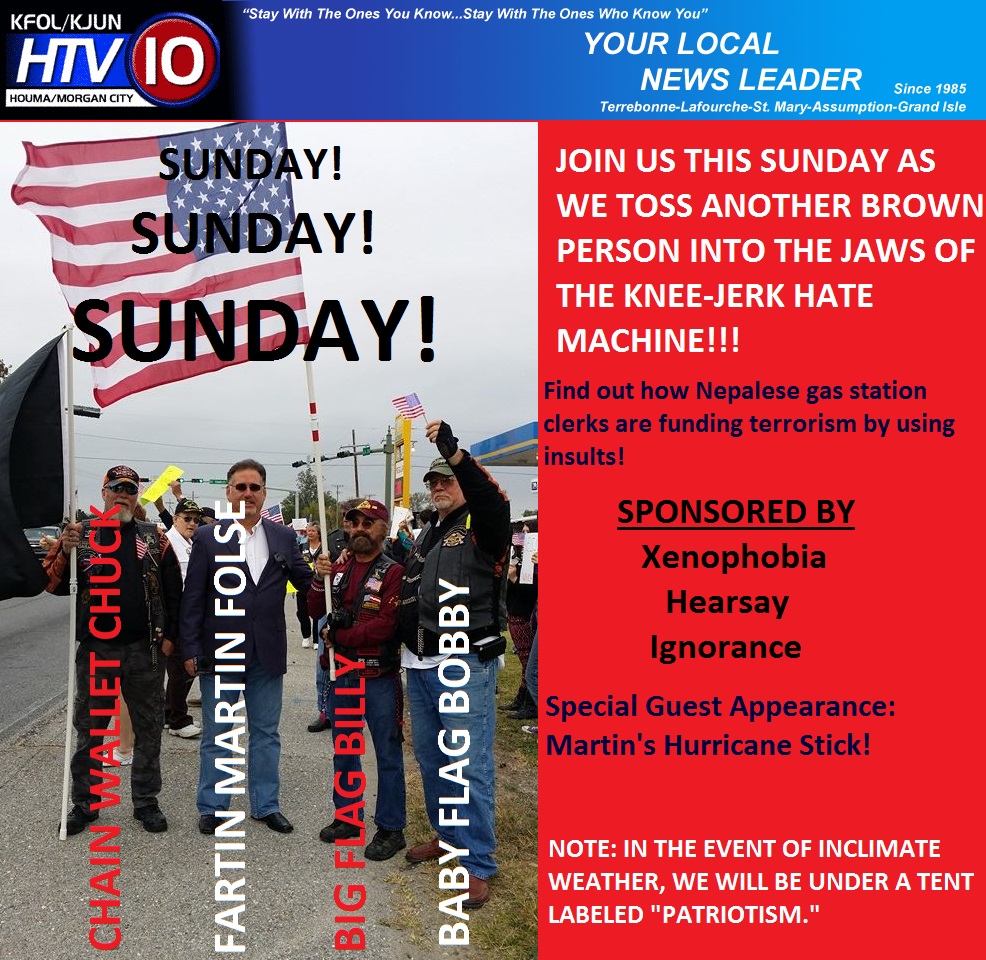 Sadly, some people did end up with feces on their faces. Dozens of protesters turned out the next day because of Martin’s faulty information. One man decided to get gas there and was approached by angry locals. He was insulted and accused of hating America. One of them said, “I can tell just by looking at you that you’re not a veteran.” It’s not shocking that men who mistake a Nepalese clerk for a terrorist are also the kind of people who judge others solely by their appearances. One of these experts in judgment even took a picture of the man’s license plate and exclaimed, “we got you now!” You have to be a coward of unfathomable depth to use a pro-veteran protest to exorcise your bully demons onto your fellow citizens. One of the funniest parts of this entire ordeal is that Martin really doesn’t even live by his own code. Here goes around telling people which gas stations not to shop at, but he was caught red handed just a few days ago at one of the places that has “ties to Yemen.” When you purchase a Monster energy drink from that store, it turns into an IED that kills three army men, but when he does it, it’s OK because he was really thirsty. Is he a giant hypocritical phony manipulating the public for his own gain, or is he a quixotic simpleton who thinks he was knighted by the parish to protect them?  If those are the only two choices we have, why does he still monopolize our public airwaves? I think one of our most powerful resources against him would be to file a complaint with the FCC. 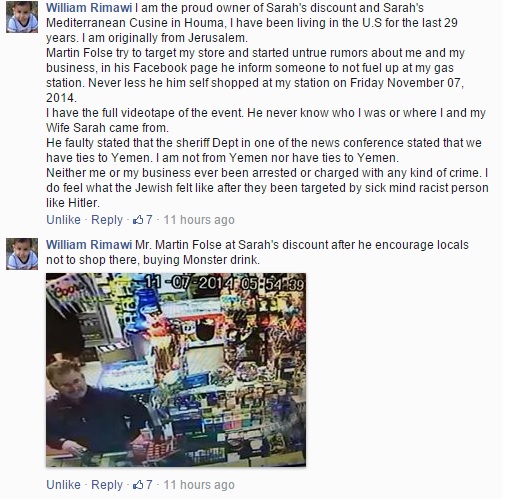 Sadly, many of the protesters were veterans and believed they were being patriotic. Let’s talk about that for a minute. Aren’t veterans supposed to be our best and brightest? Aren’t they supposed to stick up for those who can’t stick up for themselves? Aren’t they trained to make responsible decisions in difficult times? I don’t think they did that here. I don’t think they can blame Martin for being misled. I think at least some of those protesters on that day were fucking assholes, veterans or not. That’s kind of the point, all of us can be assholes, myself included. You might think I’m being an asshole right now. That’s fine. Just because you’re a veteran doesn’t mean you’re above reproach, even on Veterans day. And when Folse is sued for slander, he can’t claim it was alright just because he was being patriotic. It was possibly his biggest fuckup, and that’s saying something considering his music career. We all make mistakes. What I’m interested in is how we move forward after those mistakes. Wouldn’t it be great it HTV ends up being owned by a Vietnamese gas station proprietor? Couldn’t be any worse. 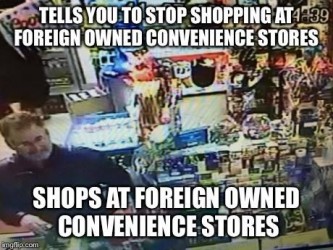 Martin Folse will undoubtedly try to take control of the narrative and frame his own apology. He will use his control of the media to delicately rehabilitate his image, possibly appearing contrite and pretending he just let his immense love of America cloud his judgment. He’ll blame his xenophobia on his patriotism. He’ll say he took the word of a trusted friend and veteran as gospel because businessmen who advertise on HTV cannot tell a lie. There were so many ways to bring people together on Veterans Day, but he divided us. He grossly misjudged our ability to think for ourselves and not let fear dictate our actions. Maybe that fancy-pants lady from Tampa gets us after all. Maybe it’s Martin Folse who doesn’t.