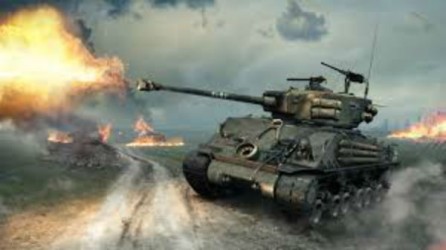 The original meaning of rock and roll: firing all guns while going at full speed.

134 Minutes, rated R for violence not out of place in a Takashi Miike film.

Fair Value of Fury: $15.00- Dramatically, it’s a standard issue war movie, but cinematically, it’s a low, grim, and spare film that goes a long way towards reminding the audience of the fact that war is hell. For war nerds, this is a worth-buying film about a relatively overlooked aspect of WW2- tank combat.

Welcome to the platoon. Get a mop and scrub the gore. That’s pretty much the introduction that wide eyed audience proxy Norman Ellison (Logan Lerman) receives when he reports to Sergeant ‘Daddy’ Collier (Bard Pitt). His first job is to go around the inside of the tank, picking up bits and innards of the last guy who had his job. It is with this sequence that we know we’re not in for any glorification of war.

Director David (Street Kings, End of Watch) tries his damnedest to disprove Godard’s theory that it is impossible to make a war movie that is anti-war. He does that by following the approach of Das Boot– lots of cramped shots of sweaty, stubble covered men who’ve not had sleep, working in a frenzy of professional desperation.

It’s 1945, in the western part of Germany. It has been said that the last days of a war are the worst, because all is breaking down into anarchy. But despite the hordes of surrendering Germans, the 2nd Armored Division still has a job to do. As the crew repeatedly asks in desperation, the Germans just won’t give up.

The character dynamics are depot-standard tropes. You have the weathered veteran commander, Brad Pitt, channeling his best Lee Marvin impersonation; you have the token ethnic (Michael Pena), the rude yokel (Jon Benthal), the newbie (Logan Lerman), and the religious/philosophical guy (Shia LeBouef, under an epic mustache). A brief note of praise for Mr. LeBouef- thank you for finally trying to act. Your performance may have had a little too much weeping, and the script may not have given you much breadth, but you’ve finally turned in a likable example of acting. It’s not much, but given your prior body of work, I feel it’s a step that deserves to be commended. Likewise, Michael Pena gets the one long monologue of the film, and his deadpan delivery of the aftemath of the Falaise Gap is an effective performance.

As shop-worn as the character arcs go, the plot conveys the randomness of war. It’s an even guess as to what comes next for the US troops- the violence is as likely to come from 13 year old children in Hitler Youth uniforms as it is to come from veterans. The war moves according to it’s tempo, with little agency from the characters. All that can be done is to ensure that the crew of five functions together as one man, and to achieve that, Sergeant Collier will be as cruel and as kinds as he thinks is necessary, and he applies both tactics powerfully and creatively. 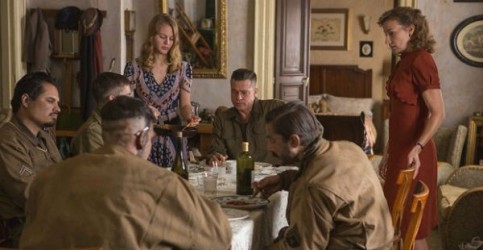 “Quit sulking Emma! At least the Americans are paying us before the gang rape. That’s still better than the Russians.”

Hell on Wheels: Where Ayer succeeds is with the visuals of this film. There may be some quick deaths, but there are no clean deaths. Machine gun fire and shrapnel dissassembles human bodies. It’s a gore-fest comparable to Inglourious Basterds and the opening sequences of Saving Private Ryan in that regard. But even better than those films, this is a thoroughly unromantic depiction of US GIs in WW2. They kill prisoners, especially as a way to ‘blood’ the new recruits. White phosphorus is used to ignite entire city blocks. The first thing the soldiers do when they get a bit of relaxation time is to search for available prostitutes. There’s no sweeping idealistic speeches here, no ‘greatest generation’ ancestor worship, in this film. Only five working joes, hoping their best to survive the next fight.

The most instructive scene of the film is when Collier and Norman get a chance to meet with some civilian German women in a newly captured town. Collier and Norman want to have a nice, pleasant, civilized dinner at a table with some pretty girls. A date, almost. Then the other members of the tank crew barge in, drunken and hollering, hoping for some whoring. The ensuing awkward conversation goes towards the core of the film- once you’ve been in the depths of combat, with the stench of rotting corpses all around you, is it even possible to return to being a polite, civilized person. If Fury has a point, it is that war changes everyone who encounters it. Nine times out of ten, it changes those people into chunky corpse salsa atop a pudding of churned mud, but not even the homilies of Shia LeBouef can help you to unsee the carnage that you’ve seen..

This is a film to watch for any persons interested in tank warfare, or just for person wanting a straightforward unpretentious serving of ultraviolence. There may not be the white knuckle virtuosity of the beach sequence of Saving Private Ryan, but this is one of the better war movies of recent years.