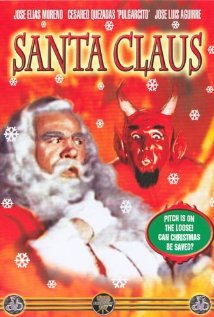 Santa from outer space does battle with Satan while children toil as slaves in Santa’s sweatshop.

To wind up the Christmas reviews of 2014, I have Santa Claus (1959) as I must review something that is truly horrible, even more horrible than the Christmas season itself, which is well upon us. I probably don’t even have to watch this horror show to review it, in fact, I don’t even have the movie and I don’t know if it will hit my mailbox before Christmas, and I really don’t care. Matt Cale has taken many bullets for Team Ruthless, so I guess it’s my turn and I hope this one doesn’t kill me. At least I will have found the answer to the question:”What Christmas movie is worse than It’s a Wonderful Life“.  I’m going to need a shower after watching it…and an emesis basin. 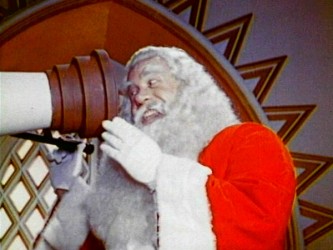 Just kidding, I watched it here on YouTube. Not only is this by far the worst Christmas movie made, it may very well be the worst movie of any genre made, anytime, anywhere. This movie is possibly more damaging to Christmas than Bad Santa and The Evil Atheist Conspiracy combined, minus Fox News. This so called movie was tedious bore, but was also the creepiest movie that I have ever had the misfortune of sitting through. Santa Claus was not even close to MST3K fun, it was in fact just the opposite in that it was infuriatingly bad.The music was painful to listen to, the acting atrocious and the Narrator would put 10,000 Vietnamese peasants to sleep while they were running away from a napalm attack. Oh, and the English was dubbed as well. I don’t even know where to begin. Strike that, I don’t even want to begin or to write this review, I only want to erase every frame and every sound of this miscarriage from my memory. It was not remotely camp funny, it was just disturbingly bad, bad, bad. Let it be clear that I did not watch the MST3K version, but the original stinker, so please pray for me. 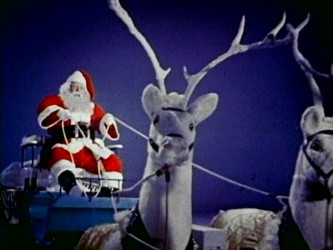 Here’s the plot, just for the record. Santa doesn’t live at the North Pole, but lives in outer space above the North Pole. Unfortunately, this concept makes more sense than anything else in celluloid strip of used kotex, it’s all downhill from there.This Santa doesn’t have elves, but instead has hordes of kids who he uses as slave labor to run his sweat shop and to man the bizarre astronomical instruments that are in place to spy on kiddies all over the planet Earth. Yeah, he’s a creep. After an excruciatingly unwatchable ten minutes of seeing the enslaved kids at the “International Toy Factory” sing and dance in their native costumes, we switch to Hell and an unhappy Lucifer. Lucifer is outraged that the kids behave and love Santa, so he dispatches his right-hand demon, Pitch, to visit earth, and convince little kids to lie, steal and undermine Santa. Of course, Santa thwarts Pitch at every turn, Christmas is saved with the help of Merlin the Magician (WTF!), and the shitty little kids get their toys after all. 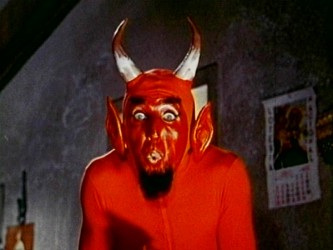 After watching this movie you will feel like turning yourself into the Sex Offenders Registry, it is just that disturbing. After the kiddie slave labor scene and the look into the bowels of hell, it doesn’t get any less bizarre as we tour Santa’s lair, complete with menacing and nightmarish surveillance equipment that is operated by one of Santa’s precocious little squirts, Pedro. Lucifer’s henchman Pitch is more laughable than threatening, but Santa and his wind-up reindeer were enough to literally scare the shit out of the most constipated of little kids. This Santa is just diabolical, and the movie doesn’t intend him to be, but after decrying the evils of tobacco and alcohol, he proceeds to Mickey Finn the rich kid’s parents so they won’t leave their little brat alone in their 6,000 sq. ft. mansion. This kid eventually grows up to be Henry, in Portrait of a Serial Killer (see picture below). 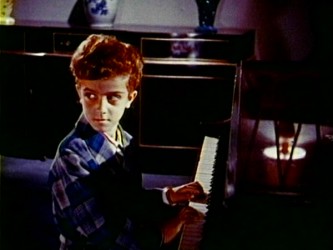 Special Ruthless Ratings -or- What I learned from Santa Claus (1959)