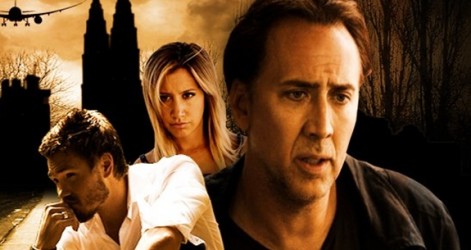 I rooted for this movie. Not for it to be good, that was obviously never a possibility. But for it to be wretched. For it to be the same kind of celebratory, full-bore madness that defines The Room or Troll 2. I wanted some vaguely Abrahamic deity to play anti-auteur with the subject matter. A scintillatingly deluded, full-fisted indictment of everything post-Copernicus, and how it all irreparably damaged society to the point that Jimmy Carter let Saddam do the 9/11. This, tragically, was not to be.

Left Behind is not a good film. It is not a good-bad film, or whatever the official term is for the types of cinematic disasters that resonate with young, smug dickheads like myself, clamoring to absorb every nuance of a heartfelt art crime. Instead, its banal, by-the-numbers chronicling of the day God decided to passive aggressively unhinge human civilization for the sake of the good ones, is left primarily with the task of informing one of the role religion is left to play in a world that understands how microwaves work.

Religious fiction is an arduous undertaking. Taking source material dripping with self importance by the kinds of people who fly planes into buildings and shoot doctors over political differences, and interjecting it into pop culture, is sort of a non-starter. The show Doctor Who, in many ways commits all of the same narrative sins as the Bible. In both cases, a long running, byzantine plot structure is riddled with inconsistencies and contradictions that could be its undoing if anyone tried to take the medium too seriously. Of course, the difference between these two is that no one is dying for their faith in Gallifrey, and no one (that I’m immediately aware of) is arguing that that show is a depiction of any kind of literal truth. The same cannot be said of Jesus’ dad, and his plan to teleport all of the babies and white people to that great Skymall in the Sky where still more white people, seem to just sort of hang out forever.

Our protagonist, Chloe Steel, is not a person’s name an archetype so forced and tired she might as well be marriage. It is she who is the standard bearer for this particular religious film’s Bitter Secularist. Like Chekov’s Gun, if in the first act of a piece of religious fiction there is some heavy-hearted individual cursing God’s name through the lens of cynical atheism, by the second or third act, you should shoot yourself. We sit with baited breath to await the inevitable concluding epiphany that some small minded, occasionally genocidal immortal really IS winding us all up for its own amusement, praise be! As far as narrative dynamism goes, this shit’s second only to Warhol’s snail. 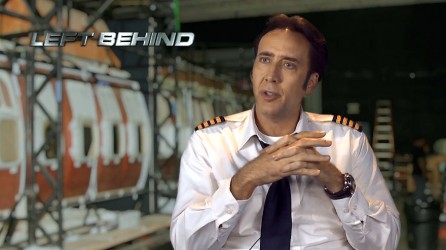 “And that’s when my character realizes he is… Home Alone. I mean, Left Behind.

Late in the film, a heretofore unseen family preacher informs our protagonist of what everyone in the goddamn universe already knew; that the mass abductions of people all over the world are God’s doing. Preparation for the ultimate showdown between Good and Evil has begun. It’s telling that this preacher, himself apparently not good enough for Gawd, is black. If this movie has anything going for it, it’s the delightful recurring string of soft, WASP-y racism. Nothing overtly hateful, but an Asian only shows up to be the smart geek. And black people are exclusively defined by their sweat suits, name brand headphones, break dancing, and being married to professional sports players. Yes, they worked every one of those angles in. No, not a single fucking one at any time is even slightly relevant to anything. Also, the film contains one Muslim man. He seems to be a stand up guy in every scene he’s in. He is left behind. Fucking wonder why.

Nicholas Cage is in this movie, now officially not even one of the more attractive men you would pass on the streets. Of Boise. He is leaving his wife (sort of?) for a good looking blond woman who really let me down by not being the main actress from Birdemic. He’s leaving his wife because she’s apparently too into Jesus, now. We get small tidbits of this coddled suburban hausfrau, and our hearts ache for her as we imagine the depths of consumer-based vulnerability she experiences whenever wandering by those little placards sold at Target that say Love on them.

I don’t think I’m placing too much at the feet of this movie by saying that Left Behind is the signal of the death of Christianity. No true believers were polarized by this bullshit, no harrowing messages of see what happens to the world if you let a black man be in charge? pervaded the right wing media outlets, following its release. Instead, this film was ignored, or simply the source of mild embarrassment. It was all just so fucking stupid.