Former Yankees owner, George Steinbrenner, was parodied by both The Simpsons and Seinfeld, one of the great achievements in the history of jerks.

Ive watched several episodes of the current Simpsons season and they are fine. Sure, The Simpsons is losing its perspicacity, but if it were a new show, Id give it reasonably high marks. Its a bit uneven, but it makes me laugh and I like the characters. Im not all that interested in saying that the newer seasons stink and Ive never understood the view that the show should be canceled because this would somehow preserve the sanctity of the best seasons. Its not remarkable that the show is not what it once was, it is remarkable that any show could ever be that good.

One theme of the classic episodes is that we are spectators to a similar decline, but of our country and culture, and the same description applies. When you think about all the human failings the show pinpoints, it is amazing that  countries like The United States even exist. For all our laziness, incompetence, ignorance and gullibility, even someone like Homer can (or could) afford to own a comfortable home full of amenities.

Before the phrase existed, The Simpsons ran us through a long list of first world problems. The all you can eat restaurant threw me out after only a few hours. My wife is mad that Im using my daughter to make hundreds of dollars by correctly guessing who will win football games. My favorite TV show was (or in the case of certain Simpsons fans, wasnt) canceled. Even an America in decline is a pretty comfortable and interesting place to be. Characters like Frank Grimes and Apu (who probably would be nixed if the show was created today because we now realize that making fun of foreign accents is the same thing as participating in a lynching) serve as witnesses whose broader perspective can illuminate our oblivious good fortune.

This is part of the reason these episodes have a nostalgic relish for Americana of the early to mid-twentieth century that parallels the nostalgia we now have for these episodes. But of course, the creators of the show know that they are being nostalgic and depict the nostalgia within the episodes, with simultaneous fondness and cynicism.

That is why the classic Simpsons sports episodes had to focus on boxing and baseball. Soccer and hockey are great… for making fun of. Basketball and the savage ballet of professional football are freak shows. Baseball and boxing are arenas for otherwise normal men who have incredible skill or a particular freakish ability, like being able to throw a specific kind of ball 100 miles an hour or an extra layer of fluid in the skull that allows the brain to survive incredible blows to the head, i.e. Homer Simpson Syndrome.

Most importantly, these sports are tied to the past, back well into the 19th century, and have rich histories full of big personalities and stories. There were old time stars who clawed their way up and had little or no concept of public relations. This in contrast to the current horticulture of prodigies as multi million dollar commodities with personae fabricated for mass consumption, who will eventually be used in clashes of ego between evil billionaires who purchase teams because penis enlargement surgery is still pretty dicey.

Homer At The Bat (the title alludes to a famous baseball poem written in 1888, in case youre foreign or something) is largely about the transition from the former to the latter. Mr. Burns envisions an all star team of past greats who sound made up for their perfect antiquatedness, but were real men: Honus Wagner, Cap Anson, Mordecai “Three Fingers” Brown. Brown was born in 1876 and lost parts of two fingers to a feed chopper on his family farm. He was also known as Miner, because he was a coal miner before becoming a star ball player. Smithers gets the gist of Burns plan and applies it to the contemporary world. He approaches Jose Canseco, offering him $50,000 to play one game. Well, its a pay cut, but what the hey, he responds.


Speaking of Canseco, here is the greatest instance of life imitating art Ive ever encountered. Until he recently blew off his finger while cleaning a gun, the real life Jose Canseco was really a ringer on the softball team of a poker dealer I know here in Vegas. No shit! Perhaps he can return to the field as Jose Four Fingers Canseco.

The show creates personas for the real ball players who serve as guest stars, though none of them live up to Jose Canseco in real life. Its a spin on the folklore surrounding the game and its players. Its also one more innovation, using so many guest stars so creatively. These celebrity cameos were funny and entertaining as a functional centerpiece of the show, rather than being wedged in to give exposure to a brand or a minor ratings bump. And the use of contemporary stars weaved the episode into the greater baseball history and lore.

My favorite exchange was between Homer and Darryl Strawberry.

Homer Simpson: Well, are you better than me?

Its a typical joke of the golden age of The Simpsons because its derived from thinking about all the little quirks about how our world works, like the enormous gulf that separates elite athletes from everybody else. Homers naivete meets Strawberrys blase bluntness about the fact that he can say with total certainty that he is better at baseball than anybody on earth who he does not already know of. You could line up 6 billion people to have the same conversation. Also, Darryl delivers his lines hilariously.

Boxing is the uglier sport, both inside and out of the ring. I contend that it is the greatest sport because it is an evil circus, but you are watching people struggle to change their lives via one on one combat and, in rare cases, improve the lives of their family for generations, as thousands of fans from across the social strata root for them to be physically harmed. This is what draws people like Norman Mailer and Joyce Carol Oates to write about it. The majority of fighters have day jobs, and/or have fought there way up from poverty. Or are attempting to do so:

Homer: Brawled his way up from the boxcars, did he?

Moe: Uh, no, not yet, he still lives at the trainyard. But he’s a
hungry young fighter. In fact, he’s actually fighting for a
sandwich.

“Dempsy and Firpo” by George Bellows.

The upside is that the money and glory obtained by fighting is the purest stuff in the world. Totally uncut. Every man–other sports stars, heads of state and billionaires–envies The Champ. But before you can make your fortune and be swindled out of it, you have to climb to the top of several other pyramids just to earn your lottery ticket. The best amateur football or baseball player in a state is more likely than not to be a highly paid pro. In boxing, winning the golden gloves at the state level means little in terms of a pro career.

Another stroke of genius: using the freedom of animation to create cinema within a cartoon comedy set in a satirical world.

Even a national golden gloves title or a good showing in the Olympics guarantees little more than an opportunity.  And the entire process of clawing to the top consists mainly of you being punched in the face, enduring training that would violate the Geneva conventions in another context and starving and dehydrating yourself. This impossible struggle in pursuit of brief moments of glory is why the greatest sports movies, Raging Bull and whichever Rocky you prefer, are about boxers. Which opens the door for a great little Raging Bull parody in this episode. Its amazing how all of these little cultural threads that span decades can be tied together into moments of perfection within a 22 minute cartoon. 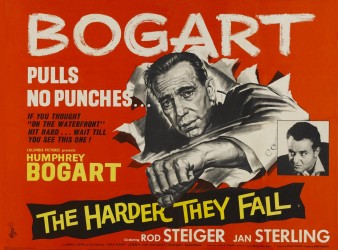 To make matters worse, boxing isn’t a meritocracy. The ability to either dish out, or absorb, violence might make you more money than skill and victories. White (or yellow) skin can go a long way too. The handful of fighters who can generate money would often prefer to take on a low skill white who has the capacity to deliver the violence the crowd desires, rather than a highly skilled black who might deliver a less exciting fight and, more importantly, have a chance of beating the champ. This is why Apollo Creed approached Rocky, and this is why Homer goes from fighting at Moe’s to a shot at the heavyweight world title in “The Homer They Fall,” named after Bogart’s last movie, which has a similar story.

Moe and Homer stand in contrast to the pantheon of fighting legends, but exemplify the ridiculous side of the sport. After discovering Homers special capacity for taking a beating, Moe happily exploits Homers ability all the way to the big time. He recalls his own days in the ring, when boxing was even worse than it is today, and sabotages the nostalgia. They call that the stinger, he fondly says of a glove loaded with barbed wire. They dont let you use that nomore. Moe possesses just enough decency to prevent his friend from being killed in the ring, which is his barrier to being a long term success in boxing.

Meet Luscious Sweet, the grandiose and verbose promoter and purloiner, based on Don King. Like fellow octogenarian Bob Arum, this is a man who was almost guaranteed to wind up rich. They could make six figures selling knives door to door. Hucksters who we love, partially because we know they are totally without conscience. Sweet/King is the perfect man to play his part in the boxing circus.

Meet Drederick Tatum (excellent name) standing in for Mike Tyson. The soft spoken killer. The victimizer and the victim.

Drederick Tatum: Homer, your manager obviously loves you very much. Lucius, would you do that for me?

Lucius Sweet: Absolutely, I would. [chuckles] Now get in the van.

One of my favorite instances of art imitating life is a joke most viewers would partially miss today. Homer and Dredericks ring walks are based on those of Mike Tyson and Peter McNeely, who won a nice prize in the boxing lotto by being selected for well paid fustigation in one of Tysons comeback fights. This whole video is a nostalgia A-bomb, highlighted by Nic Cage reacting to Johnny Gill’s national anthem, but the ring walks are at 19:28. Shit, I guess I might as well point out that Fan Man was real too. He eventually hung himself.

The farce of professional boxing is the perfect thing to capture it all. How all our violent monkey chaos just is barely harnessed by greed into an organized, if exploitative society that loves to tell stories about itself. The best way to enjoy that society is to take a several steps back from it and drink in the absurdity, the drama, the stories and the art with with a good sense of humor. Then maybe you write your own chapter, showing off your spin on the whole debacle. The Simpsons did that better than anyone has before or since.