Is this film worth my time? Its an original horror film with some great new gimmicks and a minimalist purism. I hope it doesn’t prove to be the best horror film of 2015, but it’s the best so far.

Who is this film perfect for? Horror movie enthusiasts, especially those longing for something lean and fast like an old John Carpenter film.

Who will not like this film? I can imagine that this movie bores right into the anxieties of teenage girls and young women like few other films could.

Moar, Pleez: Jay (Maika Monroe) is enjoying going out with the older Hugh (Jake Weary) until they finally make out, at which point he ties her up and explains to her that she now has his curse. She needs to figure out whether to flee, hide, fight, research, or just whimper, because its after her. Of course, she can pass the curse along to somebody else, which will keep her safe until The Follower kills off the person she slept with.

What is the summary of this films concept? A sexually transmitted sexual curse is a great metaphor for the anxieties and consequences of having sex, even if it barely qualifies as a metaphor.

But thats not the only flourish that makes this film work. Its often been argued that horror is an innately rural genre, that you cant really do urban horror, owing to factors such as population. But It Follows succeeds in being a suburban/urban horror film by a few key inversions of horror movie tropes: 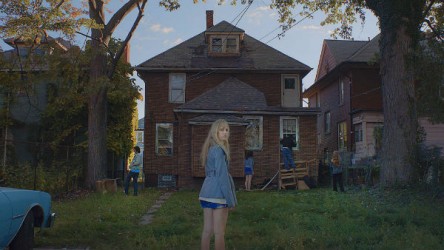 How does this film compare to others like it? It Follows is continuing in the vain of films like Insidious, House of the Devil, and The Strangers in terms of being light on the explanation beyond the basic rules of the menace. As such, it is an excellent continuation of ’80s stylistic revival’ trend in American horror cinema.

What works in this film? It Follows will likely become a classic due to five elements of the film: great scene pacing, the aforementioned trope inversions, great locations, excellent set pieces, and a terrific soundtrack by the group Disasterpeace. The rumbling electronic music, in combination with masterful sound editing and foley work, truly scale the tension up. David Robert Mitchell makes full and effective use of the Detroit suburbs- an ideal place for urban gothic. In particular, the film is a meditation on the notions of security- the suburbs prove more dangerous than the ghetto, even while the film creeps from neighborhoods from The Virgin Suicides into wastelands suited to 8 Mile.

Also, the film builds a great amount of dread. The fear and the curse are more existential, more ambient- they represent the end of summer, of youth, and of freedom. In that context the Menace doesn’t feel so much out of place as it is just another warning sign that the fun times are over for Jay and her clique of friends.

What fails in this film? See after the spoiler alert, but its easy to make the menace of this film disappear in a puff of logic.

Moralizing/Schadenfreude/Strafelust: The monster is a tulpa of post-coital anxieties, the avatar of slut-shaming. The sub-text of this film is about the fear of retaliation for female sexuality- the crisis that some random stranger is going to walk out of the crowd to attack you, to rape you, to kill you. As Jay is warned It will take the forms of loved ones just to make you feel pain.. Its a film about the root impulse which propels the phenomenon of strafelust- the continuous ambient societal desire to punish sexuality.

Do you know what the solution to It Follows is? Promiscuity and transparency. If you, dear reader, are ever being stalked by a sexually transmitted supernatural curse, heres what you should do: organize a big swinger party/orgy. Its all set on the condition though that everybody has to carefully track who theyre laying with. At the end of the party, the last person whos tagged with the curse gets the prize- a money raffle from everybody taking part, to help buy them a ticket on a long, meandering international cruise. Then, while the winner gets their expenses paid jet to their embarkation port on the other side of the planet, the rest of you can team up to back-trace the source and solve the supernatural mystery. Bam, done.

The menace of It Follows is really only scary if (a) you are lacking means of transportation and (b) shy about admitting that youve had sex. So its really only a danger to teenagers or ugly poor people like me. Just get onto a plane and do a foreign exchange tour. The curse will be stuck wading through the Atlantic (it has a top speed of 5 mph?). Then, after a few weeks, fly back, and enjoy another couple of weeks as the curse tramps back the other way.

Still, It Follows has some moments of chair-arm shredding tension, and is strongly recommended. If possible, see it in a theater/home theater with a good surround sound system.