Home / Reviews / Movies / A Wolf At The Door

A Wolf At The Door

A Wolf At The Door Movie Review

In small towns, where economic stagnation abounds and sex ratios are skewed, there is sometimes a saying that, you dont lose your girlfriend, you just lose your turn. Oddly enough, this was an expression I was introduced to by someone whoto my dismaysimply wouldnt go away. A soon as Id dump her, I would find my way back around as if sliding on loves Moebius strip. In other words, why bother? 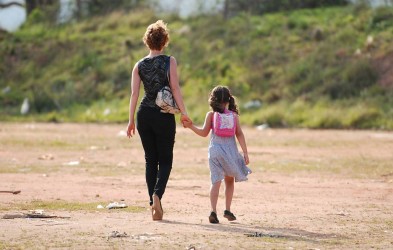 But what of a place like Rio, a city of millions, abundance and polarity? Surely, the issue of scarcity should not be severe enough to engender an obsessive clinging in the jettisoned. Not for Rosa Correa. For Rosa Correa, it was never about the numbers game dealing a straw shorter than most. Certainly, her lover Bernardo is too tied down for her likingball, chain, with the kid. In the films sole sex scene, shot close-up in profile, he wields a bucktoothed grin that, on the surface, betrays whatever keeps her coming back. She is stunning, much younger, and, perhaps, out of his league. Not that his wife is lacking, but Sylvia has deserted their marriage bed,

The film opens to a frenetic flurry, a flawless but misleading set-up. A procedural begins to take shape. After school, six-year-old Clara goes missing when she is carelessly allowed to leave with a stranger posing as a friendly face. Her daycare teacher, mother, and father get brought in for questioning. The police grill everyone individually for a motive. No sanctity is spared when the couple’s troubled marriage is revealed. Rosa, as Bernardo’s lovestruck mistress, is immediately identified as a suspect but not before recanting her first statement, suggesting that Sylvia’s lover had orchestrated the crime.

These initial discrepancies are duly sifted through and we spend the bulk of runtime recounting the “truer” version in flashback. Rosa ultimately devises a payback on her own, enlisting a hooker to tip Bernardo off to a fabricated affair involving Sylvia and with hooker’s “husband.”
Alas, this was not to be more than a red herring. Wolf at the Door would have fared more favorably it had stayed this course. It had the combustible makings of a murky, tangled mystery. Sylvia is absolved from the role of an illicit crutch, and all the depth that entails. She is instead relegated to playing the hapless, unassuming bystander while Rosa poses as friend of a long lost friend. Their newly struck friendship eventually becomes the conduit for reprisal. This development is shoehorned in and is an unforgivable error as it dehumanizes an entire side of the triangle.

Had the director evaded some rookie mistakes, this debut would have been a different film altogether. As is, it chooses to tackle the narrative fork in the road fairly soon. No wonder then that it goes limp mere strokes in, resigning the film to a hollow, bloated interior flanked by gripping set-pieces. And yet the acting and execution are superb. Its mood? Much too subdued to conform with its promise and keep up with its conviction. It becomes a character study of the jilted, scorned lover. And at what cost? I was more enticed by a portrayal of humans’ capacity for cruelty and deception in the name of wanton indulgence.

The titular wolf could well be a stand-in for marital infidelity; the action of consenting adults, ultimately jeopardizing the household and, more crucially, its children. Early on as she’s interrogated, Rosa identifies with her initial position. If she symbolizes the wolf in question, certainly her now drab existence is aggravated further by apathetic parents. This is the impression Fernando Coimbra gives.
Or, the wolf may just be a representation of any societal dysfunction resulting in oppressive idleness. Yet, I refuse to see it that way and don’t think it suits the directors contrived style. Still, Rosa is all too easily kept in Bernardo’s thrall, beginning with advances that began as schoolboy level flirtations. And whether one is employed or loafing, for the needful it is one form of bondage merely replacing another.

Therein lies the caveat. The tried and tested conventional thinking that, if something appears too good to be true, it probably is. That the road to ecstasy is often convoluted; deceptively adorned with pitfalls both treacherous and seldom heeded. As the story progresses it too becomes convoluted. What begins as a chance encounter slowly becomes a contrived coincidence. Workplaces are encroached as a coworker gets probed. An unanswered call is immediately redialed, bu new numbers appear in the call log.
Red flags at the beginning of a relationship are just an erratic nuisance. The allure of another conquest shall not be denied. Because in tow is an ego now spruced from a masculinity reaffirmed. Each encounter is a reminder of a once underestimated prowess. And so must men, weak, simple and unquenchable, keep returning to that well. The only question is how and when, if at all possible, to safely pull out.