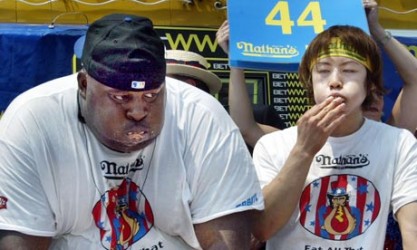 EDITOR’S NOTE: Since this list is over two years old, some things have changed. Things like some of these brave warriors having to give up this dangerous folly. Have no fear, however, fresh troops are here and I proudly present the 2019 version of The Top 10 YouTube Eating Channels.


YouTube. The Morphine Drip of the Internet. The Alpha and the Omega, the amazon dot com of anything and everything, you will find it there. I know that this list leaves off things like Epic Meal Time and other worthy dumpsters for the eyeballs, but too bad, it is what it is. It is just a list, and there are other worthy channels out there. Here is the Top Ten Most Outrageous YouTube Eating Channels. Watch…and be nauseated by what humans are capable of.

Dude, where’s My Challenge? Brits. Skinny, gay, nerdy, outrageous and lovable Brits give it their best, but are no match for their crazier, bulkier American counterparts. These guys have a huge subscription base and are often hilarious. They will eat worms, hot peppers, rotted fish, Twinkies, their own asses, you name it. In the video below, this guys destroys the Surstromming, the rotted fish, one of the most disgusting “foods” on earth, a laudable achievement.

#9 Chuck from the Bronx

Chuck from the Bronx is a fearless Yankee from up East. He will try anything, anytime, from polio vaccine to Red Devil Lye, and suffers with the best of them. You can feel his pain from just looking at the monitor. He has his puke bucket handy and puts it to good use. Keep it up…Chuck.


Naader is a for real life school teacher and an eating machine. He often appears on Wreckless Eating to show those sissy boys just how it is done. He is the doppelganger of Clint Eastwood, I kid you not. He is an eating Boss.

Randy Santel is “very, very excited” about every single eating challenge and this former professional body builder turned professional eater travels the globe to take on every eating challenge imaginable. This guy not only beats the challenge almost every single time, but usually shatters the existing records as well. Food demolition is his specialty, from continent to continent he eats and eats. He has defeated over 300 eating challenges in America and abroad, so Randy is serious about his business and is the proud owner of foodchallenges.com.

Cult Moo, with Herr Pink, Guerro and Loafy, present one of the most diversified and entertaining shows on YouTube. They deep fry, they sausage, they eat from a can, drink and chug from bottles of exotic beer and bum wines, they do it all. For pure entertainment of an eating channel, you will find it here with Cult Moo. These guys are just like family, even down to the cancer on Guerro’s noggin.

Furious Pete is a well known body builder and competitive eater. On the serious side, he has quite a story to tell about his long ago bout with an eating disorder and his more recent medical encounter with testicular cancer. Happily, Pete is now cancer free and an advocate for the early detection and treatment of this malady. Pete has been around a long time and has a huge following. Check out, subscribe and like his videos.

Matt Stonie (Megatoad) is the #2 competitive eater in the world, close behind his arch rival Joey (Jaws) Chestnut. You have to watch the videos to believe the incredible amount of food that this little trick can ingest in record time. He is amazing. Watch him on the video below demolish 3 large Pizza Hut pizzas, plus a side of wings, in 30 minutes or so. Yeah, and that is just a sample of what this human landfill is capable of. Matt Stonie holds many competitive eating records and participates in the Nathan’s 4th of July hot dog challenge, where in 2014 he finished 2nd to Joey Chestnut, eating 56 hot dogs and buns in 10 minutes. We are not worthy. (EDIT: Matt Stonie won the challenge in 2015, upsetting Joey Chestnut by eating 62 hot dogs, but Chestnut again regained the crown in 2016 by eating an amazing 70 hot dogs)

Blumgum is hilarious, a genuine wit. He is also a food challenge beast and has defeated almost every challenge posted on YouTube, including the almost impossible Cheetos and Wasabi challenge. He is infinitely watchable and plays the race card seamlessly and with perfection. The video below with the Beard Man is absolutely a must watch for any You Tube freak. “Wut’s Up, YouTube, Don’t hate, subcriptiate.” For sheer laughs and entertainment, Blumgum is your man, and he really does like White People.

The L.A. Beast has become a YouTube Rock Star with hundreds of thousands of subs. He is as fearless as he is confident and crazy, and his videos are among the most watchable of the genre. This guy has absolutely no regard for his body as he has ingested super hot peppers, set himself on fire, exposed himself to thousands of bees, you name it, he has done it. His kryptonite remains the Wasabi Cheetos Challenge, but some day he will do it. His landlord hates him, and rightfully so. L.A. Beast is a Beast.


Ted Barrus might be called by some the Godfather of hot peppers, but that designation probably belongs to the one and only legend Neil Smith from HippySeedCompany in Australia. Nevertheless, no one in the universe has suffered more pain from the capsaicin fruits as has The Fire Breathing Idiot. His failed attempt as shown in the Airborne video has never been duplicated on YouTube. Ted is probably the foremost expert on super hots in this country, and has eaten virtually every strain of super hot pepper produced. Ted is perhaps the most recognized Chili-head on YouTube and is also famous for his Twilight Puke bucket. EDIT: Ted is back again!

And the #1 Outrageous Eating Channel is Wreckless Eating

What? Wreckless Eating? You have to be kidding! I know, I know, Matt and his crew are the biggest bunch of pussies on YouTube, but their sheer volume of hilarious shows puts them over the top. His cast of Idiots is without peer and no eating channel has more shows, more variety and more consistency (albeit sometimes tedious) than Wreckless Eating. Their Main Show is anticipated and watched by millions (well, hundreds) and posts without fail at the end of each month. Matt Zion is a tireless YouTube warrior and succeeds in spite of his Gay, El-Flamo Mongoloid lover Chris, who tries to ruin every show. Seriously though, I cannot state enough how much effort Matt puts into his channel with its various sub-shows like CARBS, and other meaningless, but lovable videos that are pumped out like the Duggar babies. I don’t know how you do it, Matt, but you deserve the props as being the best of the best YouTube eating channels. So, here’s to you, *VOMIT ALERT*. Wreckless Eating is the best of the best.

Bonus Video- Here we have 5 of the Top Ten Channels all participating in a 4 Loko challenge together. Enjoy!

From left to right we have Wreckless Eating, Where’s My Challenge, Blum Gum, Cult Moo and Chuck from the Bronx.