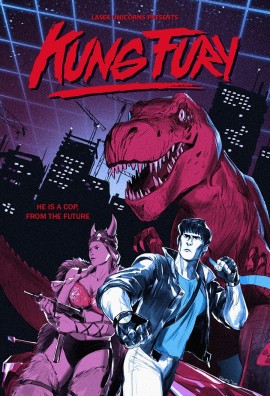 An homage and love letter to the 80s, brought to you by KickStarter. 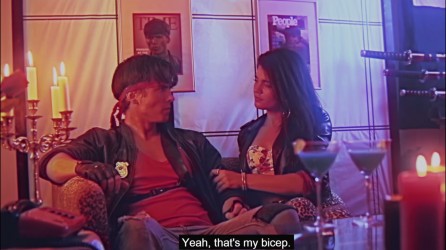 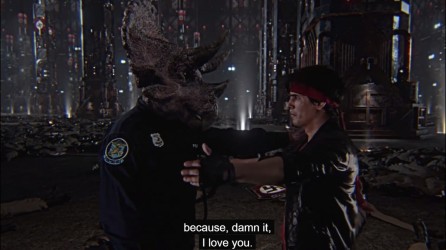 A definitive, precise tally is difficult to calculate, due to complicating visual factors and one’s criteria of how to quantify this vital 80s Action statistic. In this case those factors include: a zapper ray gun disintegrating multiple Nazi soldiers in quick succession; many physical strikes that injure but do not necessarily kill; potential unseen victims of explosions; and at least a few act one deaths that are undone by the time-traveling narrative. Anyway, 51 is a healthy corpse count for a 29 minute film. Axe Cop would be excited to team up with Officer Kung Fury. Many heads would roll. 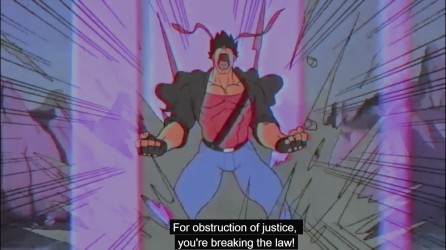 Kung Fury is more of a “movie” than a movie. Those quotation marks were always the point. Its raison d’etre is to be intentionally cheesy, as indicated by the David Hasselhoff “True Survivor” music video tie-in that preceded the feature short’s Cannes premiere. 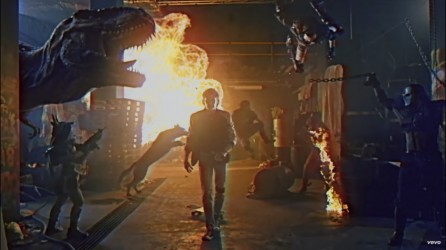 Our hope as viewers (especially if you have already seen bad examples of this type of cinema – The FP, Machete Kills, most anything produced by SyFy or Asylum) is that Kung Fury’s cleverness vis-a-vis deliberate suckiness transcends the dubious expectations attached to the genre of “so bad it’s good” meta-cinema (great examples of which include Jason X, Machete, and the ne plus ultra Lazer Ghosts 2: Return to Laser Cove).

There is more clever material & genuine inventiveness in Kung Fury than there is outright bad, failed attempts at humor, or “humor.” Nonsensical anachronisms drive the nimble narrative and keep the viewer alert and chuckling. A collage of homage glues together the original Kung Fury storylines and its influences – listen for a bastardized measure of Terminator music, look for backstory similarities to Highlander, and embrace the loving visual nods to Miami Vice.

Scenes interrupted by VCR tracking squiggles may draw a groan from those who would prefer such superficially obvious affectations stay out of an editor’s toolkit, but in this case the VHS static serves a purpose by connecting wild shots of action the filmmakers might not have had the funds to patch together without the fuzzy shortcut.

The character of Hackerman, a man who is good at hacking, makes use of props & fashions designed to remind you how hilariously low-tech the supposedly high-tech age of 1980s computing really was,

not that technologically savvy citizens of 1980something have done anything to deserve our retroactive scorn (aside from develop the tech that is the foundation for the tech we use & love today, but hey floppy disks and mobile phones bigger than your pocket are funny so fuck those guys, right?). 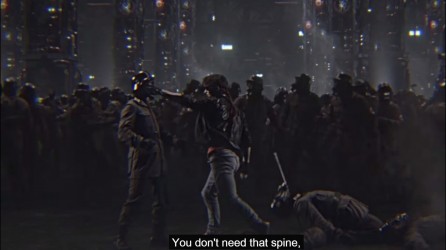 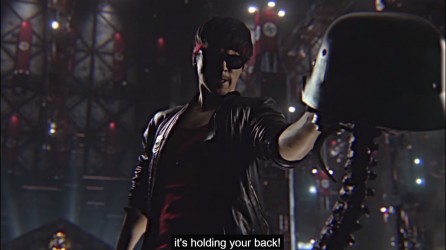 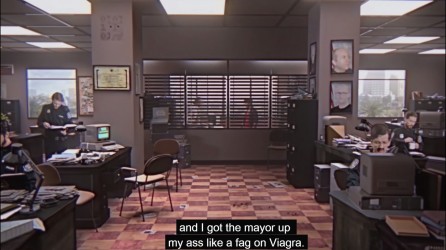 Let’s have a moratorium on the cartoonization of Nazis for a while. There are still people living among us who fought against real, actual Nazis. We should not be so comfortable producing so much pop culture content that portrays Hitler and his acolytes as simplistic villains, lazily deployed for the purpose of laughter and eventual comeuppance. No one in this generation has earned the right to portray themselves as heroic Nazi-killers, even in jest. Constructing a scene in which a CG dinosaur rips a junior Aryan supremacist in half is not an act of cinema that aligns with the brave legacy of Chaplin making The Great Dictator.

Screenwriters ought to research other evil organizations, terrorists, and dictators. Some of us have grandfathers who actually killed Nazis. Seeing their heads explode onscreen between jokey one liners and laser blasts is an act of forgetfulness, an erasure of the experiences of true badasses who shot true Nazis.

Sergeant Kung Fury is a loose amalgamation of 80s Action loner hero loose cannon stereotypes, but he also possesses the 21st century computer-enhanced moves of Mortal Kombat heroes Johnny Cage, Liu Kang, Jax, Scorpion et al, so almost every violent encounter is a novelty injury or novelty death. One that sticks out is when he uses a Nazi as a skateboard, then grabs him and pummels him back and forth, like a gorilla at the gym learning to do mad Russians with a human-sized medicine ball, until the brainwashed bigot somehow loses all his limbs.

Detective Kung Fury flip-kicks a mutilated Nazi so hard that the carcass flies & splats onto a golden statue several feet above & behind Hitler. 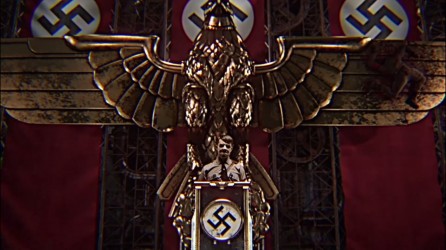 So that’s where all those Jews’ gold fillings went.

This results in some inspired set redecoration. 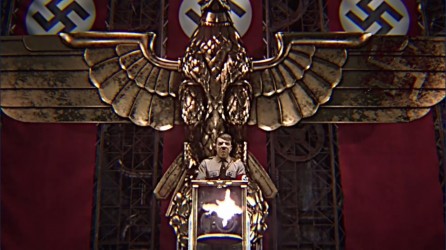 Couldn’t quite get the machine gun blast to form yet another swastika.