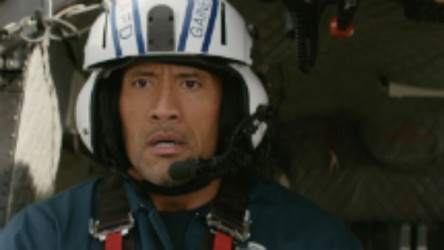 1 Hour 53 minutes, PG-13 for getting wounded by falling glass

Is this film worth my time? If you’re trapped on an airplane,San Andreas is one of the less worse choices. The Rock is charismatic and the animation and graphics of the various crumbling skylines are a compelling panorama of catastrophe. 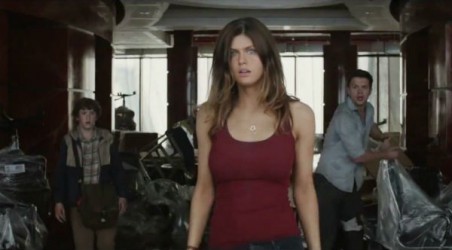 Did I mention that this film has a lot of derp-eyed staring in it?

Say Something More: The disaster film is a uniquely American genre of cinema. As I slouched in my chair, watching the hundreds die, I thought to myself: what films would the Romans make if you gave them cameras?I realized that disaster films are a luxury of a people so distanced from the experience of death as to develop a nostalgia for mortality, as a battered wife might long for the return of her attentive bruiser. Japan may make giant monster movies, but they don’t make films about earthquakes. You go to the UK, and theres a few films about plagues and fallout (When the Wind Blows, 28 Days Later). But nobody else really has Ma Nature smashing cities about.

Disaster movies are a profoundly narcissistic genre. They’re selling the fantasy of invincibility. Sure, thousands may perish in your peripheral vision, but you, dear viewer, you can walk between the shrapnel, you can navigate the crest of that tsunami, all it takes is a spoken line of hope, and then your CPR shall restore her. Never mind the millions dead, put aside the fact that San Francisco is an island, and that Silicon Valley is underwater. In the words of The Rock, “We can rebuild.” Disaster films are a power fantasy that you can somehow skip through the greatest collective traumas of human history with little more than a scrape, some grit, and some mild flinching.

But there’s more to it than that. We are the only culture that makes an annual and profitable ritual of depicting the downfall of our civilization. What the hell? 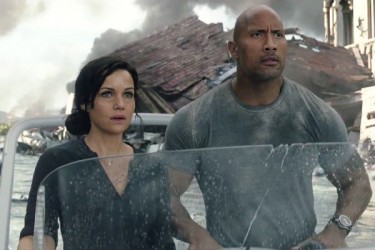 By which I mean that every character gets at least one shot of wide-eyed staring behind the audience?

I think its that puritan guilt complex again. That deep, deep ache in our Protestant culture for apocalypse, for expiation, for the vindication of providence selecting the chosen few.

Consider that its never Scranton, or Salt Lake City, that gets destroyed in these films. No, it’s a steady pentarchy of American cities that get flattened, over and over again: Los Angeles (pride), Las Vegas (greed), San Francisco (lust), Washington DC (sloth), and NYC (envy). We have a hunger for tribulation. We know, in our hearts, that the people all around us don’t deserve to have it so easy- and we know, in our hearts, that the Almighty shall steer us through the storm. We want to be pioneers again, but since NASA is shutting down (Interstellar), the only way to return to our frontier spirit is through decimation and disaster. Horses must be sacrificed to Poseidon the Earth-Shaker, or in this case, fleets of SUVs.

And it’s always the nuclear family that survives, the bonds of kin. Maybe a token comic weirdo is also elected. Nobody dislikable ever survives a disaster film, nobody exotic or transgressive or controversial. There’s never been a disaster film about disparate strangers who bond through disaster. It’s always a quest to re-unify the family, that atom of capitalism.

So there we have this cinematic pageant of guilt and vanity for our strange cultural mindset. Guilt, in that we want the luxury of our present circumstances annihilated; vanity, in that we think that we can be somehow elevated through adversity. I wonder about the strange epilogues that future historians shall write about the Americas after our society’s extinction. 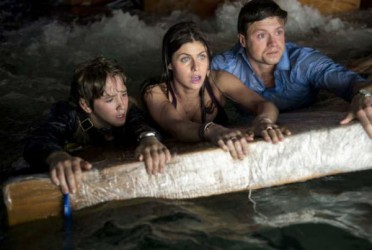 If you only want to see one movie about people staring at stuff this summer, make it San Andreas!

Who is this film perfect for? People who don’t get tired of seeing Los Angeles and San Francisco destroyed no matter how many times its shown in film. So Roland Emmerich, basically.

Who will not like this film? Well, there’s not a lot of gore, nor is there very much suspense, its formulaic and predictable. But compared to most other films of the genre, it’s not aggressively bad.

What is the summary of this films concept? We in California have an urban legend called the Big One. Its the idea that quite soon we will experience a huge earthquake. This film is aboutdepicting the Biggest of all Big Ones.

How does this film compare to others like it? It has better special effects, action, and visual than Charlton Heston’s 1974 Earthquake. And while it is less thorough at conveying the disaster across different social strata, the understatement of San Andreas cast actually makes a better performance than the 1974 ham-fest.

What works in this film? Buildings fall down real good.

What fails in this film? You can pretty much guess a characters fate from the first five seconds of their introduction. 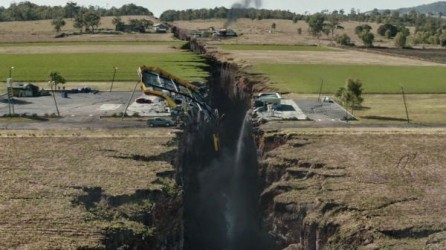 Depicted: a geological condition that you will NEVER EVER find in the Central Valley.

Bonus Round: My Father is a Geologist: “To the films credit, it is realistically implausible”.- Skip Pack. He’s been working as an executive for Dynamic Graphics, a leader and pioneer in geological modeling and analysis software, for 35 years. They got their start doing seismological modeling of the Hayward and San Andreas faults. So he might be a teensy bit knowledgeable on the subject. According to him, here are the right bits and wrong bits:

The San Andreas fault is in the right place.

San Andreas shows gigantic, jagged fault lines. Most of the area near the fault is dirt, not hard rock. If the fault splits open, you’re not going to get a giant crevasse.

There wouldn’t be a tsunami that large, and even if there was, it would split and collapse at the entrance to the bay. The tsunami inSan Andreas is “utterly ludicrous”.

The Caltech seismologists have a remarkably resilient seismic monitor network, to survive a 9.1 and a 9.6.

Apparently the Santa Cruz mountains just don’t exist in this film, because the Bay peninsula becomes an island, while the San Jose/Palo Alto region is submerged.

Driving from Bakersfield to San Francisco is pretty much the dumbest possible route that one could take in a major San Andreas earthquake. The safer, more stable route would involve going north across the Central Valley, then west through the Livermore area.