The border is just another line to cross.

Myriad. What else would one expect from a study of Juarez and the cartel violence it exports?

In the first scene, Denis Villeneuve reveals he is apparently fascinated by residences doubling as mass sarcophagi. A disturbing creative well to revisit for the director of Prisoners, but with cinematic results this good obviously it is not yet a dry one. Bisected torsos, severed limbs, headless bodies, headshots, a booby trap bomb, a little waterboarding – this is a film desperate to give its audience PTSD.

Sicario’s only demerit is that its narrative bears a striking resemblance to the final act of the critically lambasted Act Of Valor (2012). Not an accusation of plagiarism, just a noteworthy reminder of how unfairly that spectacular (and prescient) Navy SEAL movie was treated by the RottenTomatoes metric.

Sicario is everything you always hoped a good, thorough crime thriller-procedural could be. No low budget shortcuts. No tidy emotional bows wrapping up the conflict with a Happily Ever After followed by a tag promising a stupid sequel. Ace cinematography by Roger Deakins. A superb score.

We love our ’80s Action canon, source of endless silly entertainment and Stupid Political Content, but it is invigorating to see this ‘cops who don’t play by the rules’ type material given the rare prestige-drama treatment. For decades Michael Mann’s flag was the only one posted on this island of epic crime genre works made with this level of thought and care. (No, Soderbergh’sTraffic is not that special. Neither is Scorsese’s The Departed.)

Emily Blunt again scowls and handles firearms onscreen (cf. Looper and Edge Of Tomorrow) better than most actresses working today, but her role as Agent Kate Macer is about far more than kicking ass and convincing us we want her on that wall, we need her on that wall. Her eyes convey a nuanced range of emotional confusion while her movements are those of a confident, well-trained professional. She is as much the active central figure of Sicario as Maya was in Zero Dark Thirty, yet Macer is also a passive audience surrogate and a newbie pawn in an underground mission being led by forces no one fully understands.

Problems with our southern neighbor may be closer than they appear.

Her new interagency team rolls a convoy of black SUVs over the border and back, halting in traffic to win a quick deadly shootout in broad daylight, and none of the witnesses even points a cell phone camera their way. The ostensible good guys are not concerned about making local headlines, much less the likelihood that this bloodshed amounts to a major international incident.

They ghost out of there and Macer floats along with them, certain that she has joined a group of mercenaries quasi-sanctioned by the Department of Defense but uncertain if she can or should do anything to slow their legally dubious task, which is “to dramatically overreact” on behalf of pissed off Arizonans. Nothing is illegal if there’s no paper trail, so I assume these guys decline to fill out the form explaining to their bosses why they left the office that morning with 10,000 bullets and came back with 5,000.

“I tried to have sex with my hitman!”

Virtually all the players in Sicario’s joint task force are chiefs, and they are all competent. Maybe too competent. The real Stupid Chief here is the American taxpayer for not having a legally sound framework to police the police. The undeclared spook-work at the border and the secret detainment & torture of Mexicans is probably no big deal to most American voters, but I doubt they would be happy to learn we are funding a government employee’s use of a nice private jet between tunnel-busting operations.

-On some levels, Sicario can be viewed as an updated “Complete the danged fence” advertisement, but we all are more enlightened now several years after the McCain campaign embarrassed itself into irrelevance. No aspiring political leaders today are proposing a 2000 mile long wall. Of course not.

“Some of you, I assume, are good people.”

-When selecting new trigger-squeezers to be promoted from the FBI to the unlabeled task force, one potential recruit’s law degree is actually used as a point against him. “We don’t want a lawyer.” Unless, presumably, that lawyer’s name is John Yoo or Jay Bybee.

Amidst the corpses, it is Agent Macer’s soul that suffers the most notable devastation. Her modest faith in humanity withers toward oblivion. When Jake uncovered a world of moral sickness in Chinatown, at least he had already been a cynic from the start.

Busting the cartels “would be like discovering a vaccine.”

Stay the fuck out of Juarez. 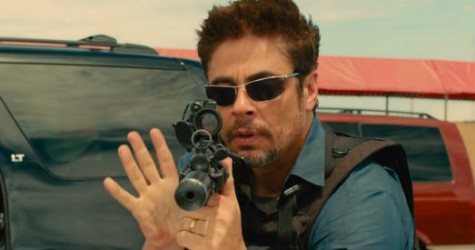