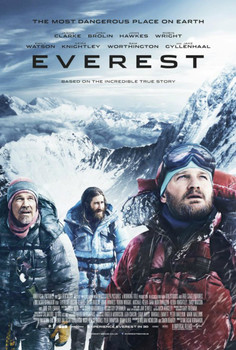 Everest can still kill you. This movie shows you how.

I have watched numerous Everest and K2 documentaries and am firmly in the Matt Cale camp of mountain climbing. We both look on these climbers as a bunch of narcissistic born-rich fools who deserve to die because they have been polluting these beautiful and majestic mountains for decades with their corpses and O2 bottles. There are many more dignified ways to die, such as abuse of drugs and alcohol, texting while driving a 4,000 lb. vehicle at 70 mph, and handling venomous snakes if you are religiously impaired, so I don’t know why the rich and selfish have to invent another one, but they do.

Everest is a movie produced and directed by Baltasar Kormakur that re-enacts that ill-fated May 1996 expedition in which 8 climbers succumb to the mountain and one of its sudden storms. Little is known about the fate of the 3 Indian climbers who died on the north face of Everest, this docudrama focuses on the 5 who died on the south face of the world’s highest and one of the most deadly mountains. Everest and other climbing movies include Everest (1998), Storm over Everest (2008), The Wildest Dream: Conquest of Everest (2009), Into Thin Air:Death on Everest (1997), Touch the Top of the World (2006), and of course, the best of all, Touching the Void (2003). EDIT: Please read these subsequent reviews The Beckoning Silence and Meru They are awesome to watch. 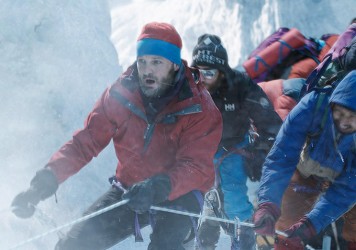 I tend to root for Mother Nature at every opportunity because humans continue to stupidly think that they are somehow a special species, divinely created by God, to have dominion over the lower animals (and humans) and certainly to lord over the more mundane and less mobile of the creations, like the ocean, rivers and mountains. Man has always been an explorer, driven by his own curiosity and of course, by greed and commerce, and no one can fault explorers like Magellan who first circumnavigated the globe. It’s out there, and humans just have to know what is on the other side, but the unhealthy compulsion for every Tom, Dick and Harry that has thousands of dollars to burn, to clog Mt. Everest like the Lincoln Tunnel at Friday afternoon rush hour, is repulsive and unnecessary.

With all this in mind, I attended the Wednesday matinee with 3 other strangers, ready to relentlessly mock yet another human endeavor to stick his nose where it did not belong and having it lopped, eaten or frozen off. What I watched instead was a well-made, well acted and engrossing movie in spite of the pregnant wife made widow that almost had me sobbing like a little bitch. I mean, how does this happen? Well, with breathtaking cinematography, fine acting and just enough character development and sentimentality to make it enjoyable without being overly sappy. There was nothing outstanding about the plot and the first part of the movie bordered on boring as the backstories were developed. I groaned when I saw the pregnant wife, knowing where this was going, but after I settled in and the movie progressed, I had a faint glimmer of hope for my afternoon. 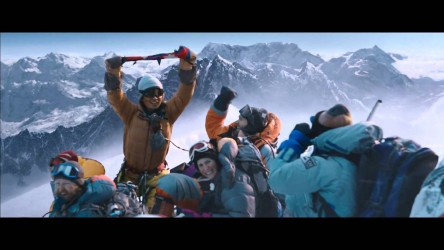 This movie was about climbing Everest, and summiting had become big business, and with Rob Hall (played by Jason Clark) struggling with the ever more competitive business of getting clients to the top and back without killing them. Opportunity presented itself when a high profile journalist hired him to summit and they were joined by one of Rob’s old friends, Doug the mailman (John Hawkes), a Japanese lady with 6 other summits under her belt, and Beck Wethers (Josh Brolin), a very venerable Texan outdoors-man. Other than the performances of the aforementioned stars, great performances were rendered by Emily Watson as the climb coordinator and Jake Gyllenhaal, a competitive team leader. The acting was splendid, but the real star was the mountain, brought alive by breathtaking cinematography and stunning audio effects. Mount Everest was not to suffer comeuppance from mere humans, so when the human errors started to mount, the mountain made them pay with a vengeance. 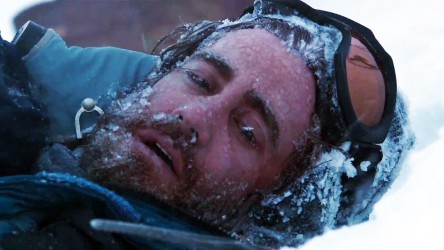 I won’t reveal any spoilers, but some die horribly and when you least expect it, one rises from the frozen ashes to survive. Again, the effects and cinematography were outstanding, especially the scene that depicted what was an ordinary thunderstorm for the valley, metamorphosed into an unbelievable atomic-like blast of hoary ice and death at 29,000 ft. To the movie’s credit, the ending was not overly melodramatic, losses were accepted with dignity and Mount Everest remained unimpressed by the efforts of humans.

I was pleasantly surprised by this well made and exciting movie and in spite of myself, thoroughly enjoyed it. The tension is visceral, the shots and sound glorious, and the acting was top-notch. Other than Touching The Void,this is the best of the mountain-climbing disaster movies yet, worthy of a place in your video library. Go see it.