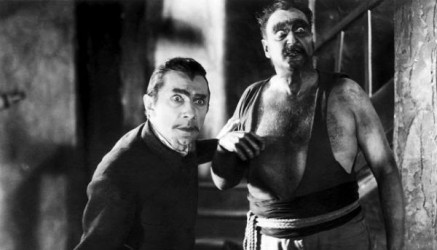 I may have a skewed sense of what is child-appropriate, but these movies do not contain any great amount of violence or sexual content, and as such, might qualify for being spooky, but not traumatizing. Children do want to be scared sometimes, and in the right conditions and pre-requisites, there can even be a benefit to allowing your child to experience and confront fear within a supervised environment.

[Editor’s Note: Netflix has their own system for searching genres. Just plug in the number to narrow things down. Use this url and just plug in the code: http://www.netflix.com/browse/genre/###. For a list of all the genre codes, you can check out this site. The example below includes all genres, not just horror movies.]

So lets talk about the criteria. Here’s the format:

TL/DR: A brief summary of the concept of the film.

Type: Monsters that are featured

Risk of Trauma: The probability that scenes in the film will cause nightmares or lasting phobias for your kid.

Age prediction: The minimum age range for the kids to appreciate/understand the film. 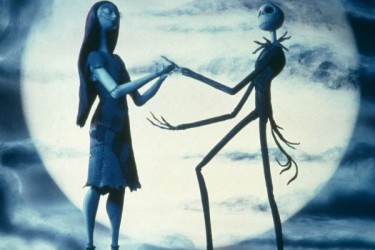 TL/DR: The Lord of Halloween attempts to perform Christmas instead.

Risk of Trauma: Low to moderate. No real violence, though Oogie Boogie (the bad guy) is made of bugs, and some of the other denizens of Halloween Town are also grotesque.

Summary: Tim Burton’s stop motion masterpiece is one of the most essential children’s films, perfectly blending wonder and weirdness.

Risk of Trauma: Low to moderate. The only violence is highly cartoonish.

Summary: Raul Julia, Angelica Huston, Christine Ricci, and Christopher Lloyd are all at the top of their game in this dark comedy adaptation of the TV show about the original alternative family.

Risk of Trauma: Low to moderate. You may want to cut out before the ending (skip the last three minutes). Under no circumstance show the 1980s David Cronenburg film.

Summary: One of the highlights of Vince Prices career, the Fly is a perfect example of the 1950s B-Movie genre. The special effects will render it more cheesy than chilling to a modern viewer, but it still has moments.

TL/DR: Girl must rescue her brother from the Goblin King

Risk of Trauma: Low. Scariest scene is probably The Fire Gang, at 50 minutes. Though based on anecdotal evidence from women who saw Labyrinth as young girls, there is the risk that it will imprint David Bowie upon your daughters conception of sexuality.

Summary: Jim Henson’s masterpiece is one of the best fairy tales ever brought to film, striking the perfect line between the darkness of medieval fairy tales, the beauty of Victorian fantasy, and the magic of modern muppetry. A perfect meeting of writing, acting, music, and practical effects.

TL/DR: Kids must fight Dracula as he assembles the classic Universal Movie monsters.

Risk of Trauma: High. There is some real violence in this film, and the monsters have enough 1980s magic effects. Also its of the period (Goonies/ Lost Boys) where there was a lot more adult dialogue coming from the mouths of child actors. This is a very dated film, from an era when the PG-13 rating was far less restrictive.

Summary: The Monster Squad is a late 1980s film, balancing a hearty mix of Baby Boomer nostalgia, faux Spielbergian suburban magic, and late 1980s attitude. Still, its at the right level of being scary without being traumatizing. 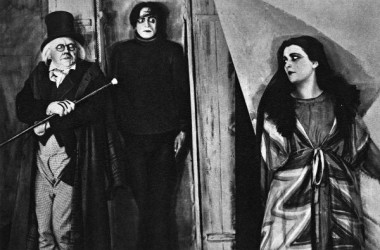 TL/DR: Evil hypnotist commands a somnambulist to rob and murder.

Summary: A defining film of expressionist cinema, The Cabinet of Dr. Caligari is stylish and iconic, while lacking the scariness of modern horror. The calliope heavy soundtrack on the Netflix version also serves to make this landmark more spooky than horrific.

TL/DR: A(n) (g)elf(ling) sets out to find others of his kind in a fantastic land.

Risk of Trauma: Moderate. The villainous vulturine Skexies will completely terrify young children, while being only weird to more mature kids. Skip the scene at 34 minutes, where the villains drain a creature of his life essence. 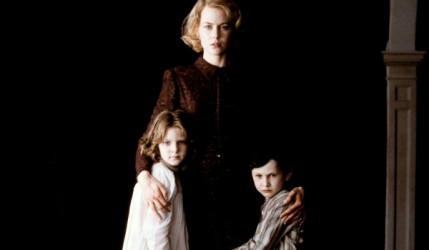 TL/DR: During WWII, a mother and her two children are sent to live in a haunted mansion in the British countryside

Risk of Trauma: Moderate to high. Not much violence, but a great amount of creepiness in this moody gothic.

Summary: Nicole Kidman owns this film in one her strongest career performances, as a neurotic and paranoid housewife. Probably the scariest haunted house film that you can actually show to children.

Risk of Trauma: High. Although the monsters are cartoony (they’re fantasy trolls), there is some real suspense. Skip the scene from 1:10 to 1:15, where the characters investigate a troll cave. There is violence, but it tends not to be gory- the monsters of the film explode or turn into stone when subjected to sunlight or the equivalent thereof.

Summary: A charming Norwegian entry in the found footage genre, Troll Hunter is weird, sometimes funny, and more of a giant monster than a scary monster horror film.

Risk of Trauma: Mild. The stop motion animation takes a lot of the sting off the graveyard antics, but theres still moldering corpses and genuine murder. 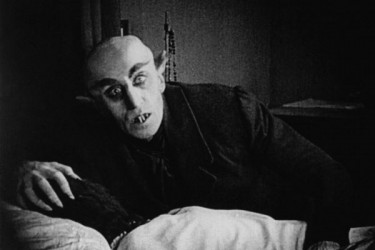 TL/DR: A vampire count travels from Transylvania to Germany

Risk of Trauma: Mild. Count Orlok is creepy, but the violence is never that overt.

Summary: The second most important and iconic film in establishing the imagery and tropes of the modern vampire, Murnau’s masterpiece is eerie and memorable

TL/DR: Young Boy must rescue the land of imagination

Risk of Trauma: Mild. The Nothing is scary, as is the wolf monster, and theres also the scene in the swamps. If you want to coddle your children, skip the swamp scene at 30 minutes, and the encounter at 1:10,

Summary: Your kids will question why this film is scary, until the wolf monster shows up. But along the way, its a strange and unique film about imagination and the importance of reading and thinking.

TL/DR: A young wizard seeks to help a unicorn to find another of her kind

Summary: Yet another in the distinctive sub-genre of surprisingly dark 1980s European children’s fantasies, the Last Unicorn is full of melancholy and strangeness, but that’s what makes it memorable. While it has a hero’s journey, its not as formulaic as most modern children’s films, and that’s where the charm lays. 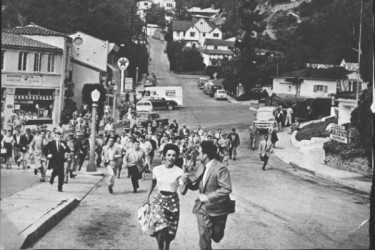 Age Range: 5 to 13, though younger children will likely be bored.

Summary: This is a classic story of paranoia, and also the best way to explain the Red Scare to children.

Summary: Bela Lugosi was never finder than this, as the voodoo wizard Murder Legendre. Victor Halperins moody Caribbean gothic established the concept of the zombie in pop culture, but his films sticks to the classic mythical version- mindless people, rather than rotting cannibalistic corpses. Its full of menace while still being without overt violence. 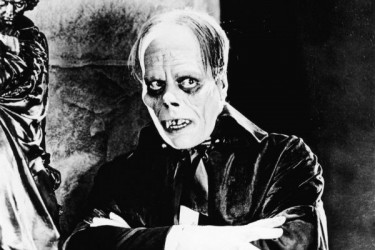 Risk of Trauma: Mild. A shadow a hanged man is as close as it gets to on-screen violence.

TL/DR: Deformed man falls in love with a gypsy beauty, incurs wrath of the inquisition.

Summary: The other half of the standard Lon Chaney double feature is this adaptation of the Victor Hugo novel.

Risk of Trauma: Moderate. The special effects are cheesy, but there is the part where Seymour feeds (fake rubber) body parts to Audrey, at 26:00.

Summary: Though lacking the great musical numbers (and Rick Moranis), the original Little Shop of Horrors is still a strange little black comedy that shows the quirks of Roger Corman’s film-making style. 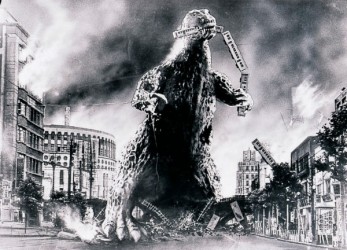 Risk of Trauma: Mild. Consider skipping the hospital scene at 1:12, which really drives home the devastation of Godzilla’s rampage. The biggest risk of letting your children see this film is that they will have a new favorite monster, and they will try to do their best imitation of the Godzilla roar.

Summary: Ishiro Hondas film is the definer of the Kaiju genre, and a deserved classic of the genre of 50s science fiction. Many Hollywood studios have tried, but all the stars and all the special effects were never quite able to make Godzilla as exciting and scary as this first film, where hes cast first as a gradually solved mystery, before transitioning to being a walking embodiment of disaster.

TL/DR: During the Napoleonic wars, a young French officer billets at an old German castle.

Summary: A straight up gothic horror by Roger Corman, The Terror stars a young Jack Nicholson and an old Boris Karloff in a haunted castle classic. Its a warmup to the later Allen Poe adaptations that Corman did with Vincent Price. 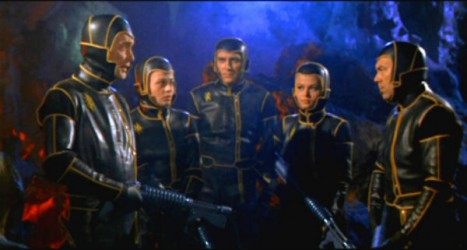 TL/DR: Space explorers face a mysterious force that possesses the crew on by one.

Summary: Mario Bava’s science fiction film is classic atom age space wonder, and the moody sets were an inspiration for Ridley Scotts Alien. But there’s no body horror to fear here, just a lot of eerie music and paranoia as the crew tries to figure out who’s still human.

TL/DR: Bored girl finds a tunnel at her new house leading to a sinister wonderland.

Risk of Trauma: Moderate. Other Mother, the villain, is legitimately terrifying. There are also ghost children, and bugs.

Summary: Laika’s first stop motion film brings color to Neil Gaiman’s half-fairy tale half ghost tale of a strange house and a precocious young girl. If you think your child can handle it, this is a perfect companion to Pixar’s Inside Out– both films are about one girls struggle to adjust to moving to a new city.

TL/DR: Circus carnie schemes and murders his way to stardom, and then is undone

Risk of Trauma: Moderate. Skip the ending five minutes, where we see the main characters comeuppance, and the rest of the film is fine.

Summary: 1940s noir at its finest, this film has Tyrone Power as the ruthless centerpiece of a story of magic, betrayal, and damnation. 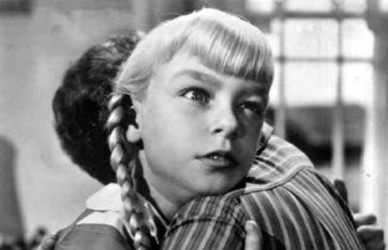 TL/DR: Young Rhoda seems like the perfect daughter when shes not killing people

Summary: A riveting example of the hard boiled psychological thrillers that were in vogue during the 1950s.

TL/DR: One man fights to survive on a planet emptied out by a terrible plague

Summary: You are probably familiar with I am Legend, the big budget, vastly inferior adaptation of Robert Matheson’s horror classic about a world taken over by vampires. The 1950s Vincent Price version is much talkier, and shorter on action, but the dialogue really conveys the crumbling mental mindset of the protagonist, while keeping the film within child-acceptable parameters. 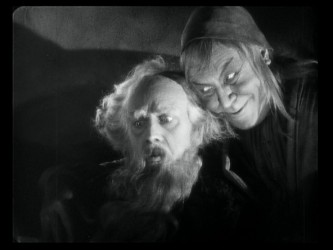 TL/DR: Man sells his soul, seek to cheat out of the bargain

Summary: Another great film of German expressionism, Murnau’s adaption of Faust is more romantic and less dark than the original play. There’s a happy ending! But in between that, the demon Mephistopheles has his moments of menace.

Summary: Joe Dante’s sequel is more Warner Brothers cartoon done in live action than horror,thanks to numerous sequences of the Gremlins being silly. Its a terrific send-up of late 1980s pop culture- everything from Donald Trump to Siskel and Ebert are targets.

Summary: Another Vincent Price classic, and the best of William Castles gimmicky films, this is another gothic spook fest fool of skeletons, acid pits, and cobwebbed dungeons.

TL/DR: Nobody believes a young boy who saw a flying saucer land in his back yard.

Risk of Trauma: Moderate. No violence, but it might instill a fear of quick-sand (the aliens trap people that way).

Summary: Another classic of atom age horror, this film hinges on the child’s effort to find somebody, anybody, who will believe his theory that aliens are taking over his town. A classic of 50s paranoia with a twist that every child will empathize with.