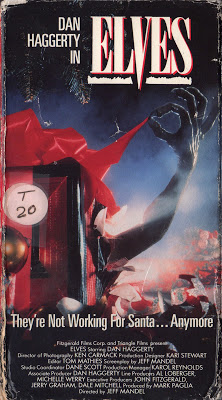 Elves and Nazis team up to create a Master Race. Hilarity ensues.

After watching Santa Claus (1959) and reviewing it, I was confident that things could not get any worse. With Santa’s Slay in the wings, I felt compelled to endure some other genuinely horrible movies, and it wasn’t long until I found and watched Elves. This miscarriage is available free on YouTube and it would be a felony to charge anyone anything to watch this trash. I am a competent writer and a veteran of having written dozens of Christmas reviews, but there are no words to adequately describe this film. First of all, it was rated PG-13, but only 5 minutes into the film we have tits, numerous F-Bombs, and a partially-clothed teenager writhing around in bed with her pre-pubescent brother after he had peeked in at her during a shower. “You’ve got big fucking tits, and I’m telling everyone I saw them”. No, I’m not kidding and this scene was one of the more sensible ones in the movie. 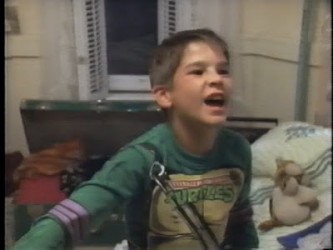 It’s a Christmas movie, so we must have Christmas Witches, Nazi Scientists, Rubber Elf Puppets, and an evil plot to create a master race of elves -vs- The Valley Girls and Grizzly Adams. You just can’t make stuff like this up. Unlike other stinkers like The Beast of Yucca Flats, this movie did not even have the common courtesy of being brief, but runs an excruciatingly long 100 minutes instead. Again, please pray for me.

The star of this debacle was Kristin, and Kristin was not having a very good life. She and two of her anti-Christmas girlfriends borrowed Grandpa’s forbidden book, managed to bleed in the woods (which gives rise to an Evil Dead like something crawling out of the ground), engaged in some really horrible dialogue, and then went home. Well, things there were not any better as Kristen was slapped around by Grandpa, verbally abused by her Stepmother from hell, groped by her brother and Santa Claus later, and suffered other cruel atrocities that I will not spoil for you. 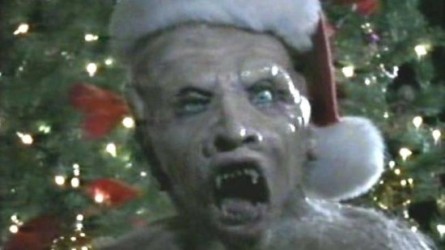 From a technical standpoint, the film was total disaster on every single level. The almost non-existent lighting, which was both a blessing and a curse, was only eclipsed by the unfortunate existing dialogue which included stunners like, “Life is long and hard, Kevin is thick and David is a yard”….or “Is everything alright?” “No, Willy, Grandpa is a Nazi”. Then, of course, there was the superstar of this Christmas mess, Dan Haggerty in all of his Camels chain-smoking, film noir-like glory. Not only could he smoke, but he could also shoot with the longest and dumbest shoot-out in Department Store history, while the store alarm blared for what seemed like forever. Finally the cops arrived and the stupid chief proudly ordered, “Dust for latent prints!” In a Department Store where there were just hundreds of shoppers there on Dec. 23? Brilliant! Why was Grizzly Adams there? Well, he was a former detective, down on his luck and homeless, so he was hired as the Department Store Santa because theirs was murdered, stabbed in the crotch 12 times by an Elf. If this makes sense, then continue to read my review. 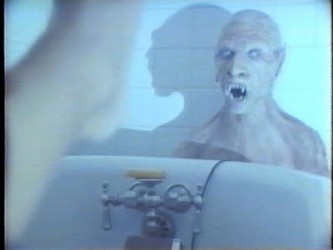 The Elf- There was only one Elf, and he was perhaps the worst elf monster ever, but he sure got around. The monster make-up was laughable, just a rubber mask, but he participated in what had to be one of the greatest scenes in this movie, and I’m choking on those words when I type them. I don’t know why, but this Elf had to just go around killing people randomly and no one could mourn the *SPOILER ALERT* death of the bitchy stepmother, cat killer *END SPOILER ALERT*. I literally LoL’d at the bathtub scene where the unfortunate stepmother flopped around for what seemed like an eternity in the bathtub after the naughty elf dropped the radio in the water. There is always a plugged in radio at bathtub death scenes, and this one was blaring Verdi’s Aida Triumphal March in all of its magnificence as she writhed around in her death throes. It was wonderful. Again, this movie was rated PG-13, but there was full nudity including tits and pubic hair with this shot. Thank Goat for small favors in this wretched Christmas movie. The Elf just stood there, in all of his 2 ft. glory, mouth always agape (again, it was a mask) and nodded his head up and down while obviously masturbating to her death by electrocution.

What transpires for the rest of the movie was beyond inexplicable and beyond un-watchable. It is un-watchable for two reasons: the film is so dark that you really cannot tell what is going on, but you are confident by the idiotic plot progression and dialogue that it is just best to skip the dark forest scene. Yes, mercifully the movie ended and I again won’t spoil the ending.

Special Ruthless Ratings -or- Things I learned from Elves: