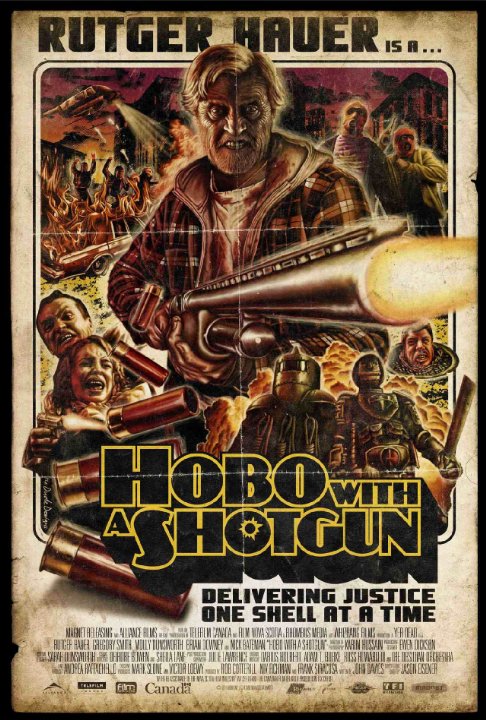 This Hobo has had enough, and delivers justice one shell at a time.

Hobo with a Shotgun was hardly an 80’s Action Movie since it was produced in 2011, but there was no reason that the 80’s format could not be used on this totally over the top bloodbath. If you don’t approve, take it up with Rutger Hauer. Yeah, that’s what I thought. Hobo with a Shotgun originated as a mock trailer contest promoting the roll out of the Tarantino/Rodriguez double feature of Grindhouse. It burgeoned into a full length film that eclipsed Grindhouse and was unique with its dark humor and gore. When I saw Rob Wells from Trailer Park Boys in the first scene, I knew I was in for something special. By the time we were to the scene with the school kids on the bus, I knew this was a movie that could offend everyone, even Santa and Christmas lovers.

This movie was set in the town of Hope, but there was little hope in this hellhole, a dystopian urban landscape of graffiti, violence, death and chaos. This urban landscape is not unlike that of Death Wish 3 , Dollman, or the Western classic The Great Silence and has the same happy endings. After witnessing nonstop abuse, bullying and outright brutal murder of the town’s unfortunate citizenry, the Hobo has had enough and it’s vigilante time! The Hobo forms an unlikely alliance with a good-hearted hooker and they try valiantly to rally the townspeople to rise up against the tyranny of the thugs. 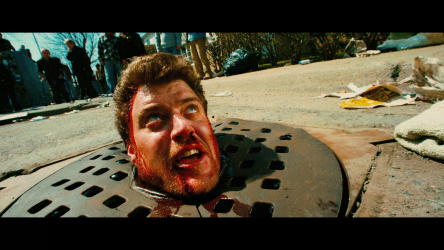 Delivering justice, one shell at a time.

Hobo mad as hell, can’t take it any more.

In this movie, it was virtually impossible to count the number of violent deaths (they were all violent), much less the total number. This was one of the deadliest movies of all the 80’s Action Movies even though it is not an 80’s Action Movie. Make sense? Of course not. Anyway, the total count is somewhere up there with Death Wish 3, because of the deaths of all of the homeless, but the murder total attributed to cast members is a very solid 51. The Hobo alone killed 12 victims including a pedophile Santa. I am going to conservatively estimate 125 deaths because of the long night of violence against the homeless. 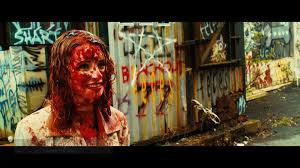 Most were totally inspired, but I liked the baseball bat with the embedded double-edged razor blades the best. The subsequent act of violence with this bat completely eviscerated a human pinata, who was a Jesus-looking man being beat to mush by some giggly hookers. The manhole cover with the barbed-wire noose was pretty neat too, as was the Dodgem Car squish at the Amusement Park. Of course, the most controversial deaths were when Slick and Rip burned up the school bus full of young kids in a scene that really pushed the envelope of decency. Decency? None needed or expected here in this kaleidoscope of gore and blood.

Hobo with a Shotgun was not bad at all. It had a lot going for it before one frame was watched because of the title and the star role of Hauer. The plot was weak and the ending disappointing, but this film was about style, not story. As you might imagine, Hauer carried the film and was perfect as the craggy, derelict hobo. He always played it straight in the movie with no gratuitous cracks or self-aggrandizing lines. The strength, other than the obvious performance of Hauer, was the use of bright Technicolor to intensity the carnage and gore. The final scene paid homage to Kubrick and Spielberg’s Flesh Fair in Artificial Intelligence and ended badly for most involved. 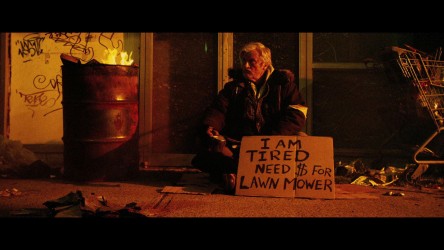 Was there a stupid chief?

He wasn’t stupid, but he was probably the most corrupt chief of all time.

There was quite a bit when you consider the plight of the homeless and corruption of the police department. This slight interjection of PC did not affect the enjoy-ability of the movie at all.

Was there an atomic blast at the end?

No, but there was an abrupt and unhappy ending.

What I learned from Hobo with a Shotgun:

More Quotes and one liners: