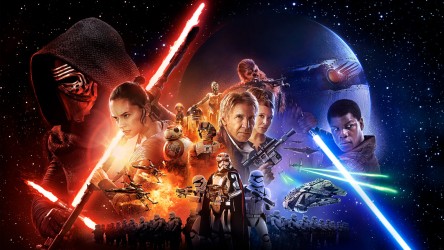 The first time I saw any Star Wars movie in the theater was in 1983, when Return of the Jedi was released. I was 4. It was a major deal in my family, so much so that when Christmas rolled around 7 months later, my siblings and I were still super excited to receive Star Wars merchandise from our parents and Santa. Fast-forward 32 years: I’m a lot older! There’s a new Star Wars movie! And I’m no longer excited about movie-related merchandise, but I was very excited to see the new movie. 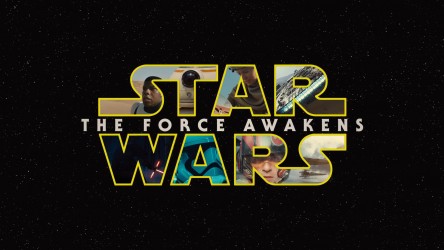 You might be asking, “Why? Episodes I, II, and III were not great.” True! Still, we all went to see them, because the one thing we were collectively curious about was, “How did Anakin Skywalker turn into Darth Vader?” Then we wondered, “How did it take 3 movies to explain that?” My guess is: money, and a predetermined story-line that George Lucas came up with while taking bong rips 30+ years ago.

But I felt a real sense of longing to see the new episode, and I wasn’t alone. When the last trailer was released, I went to my mom’s house to show it to her, and her reaction was really quite something. Her eyes widened when she heard the familiar notes of John Williams’ legendary score, and she audibly gasped when she saw Han Solo for the first time. Gasped. That says something about the power of the original three movies. For whatever reason – characters, actors, special effects, plot (or a combination of all these and more) – those movies have stuck with us for decades. And now, knowing how Anakin became Vader, we wanted to get back to what really matters: where do our beloved characters go from here? 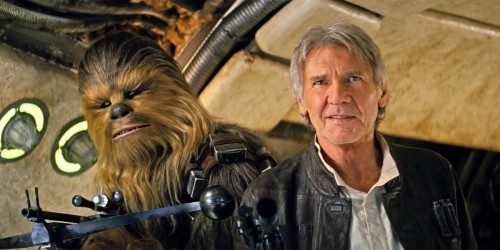 Episode VII opens fast. In fact, the whole movie moves fast. At first I was a little perplexed that we were just diving right into it, because if you’ve made it this far into my review, you know that I like an intro that builds. However, reminding myself that we’re now on part 7 of a 9-part story, there was little need to explain things. The crawl at the beginning gives you the important details (which are not spoilers, so don’t worry): we’re 30 years removed from the destruction of the 2nd Death Star, Luke Skywalker is missing, Leia is now a bad-ass general in the Resistance, and a new threat has emerged from the ashes of the Empire, the First Order.

Our two main characters, Rey (Daisy Ridley) and Finn (John Boyega), are terrific. They’re youthful, energetic (hello, Daisy Ridley runs like 10,000 miles in this movie), and best of all, they’re fun. Their chemistry is great, and their banter will remind you immediately of Leia and Han. In fact, Finn’s humor is like Han Solo on speed. He lacks the general charm that Harrison Ford had in the original films, but the twinkle in Finn’s eye is the same. And Rey is cool, smart, and good at just about everything, and the story is set up to take her (and Finn) to some exciting places. 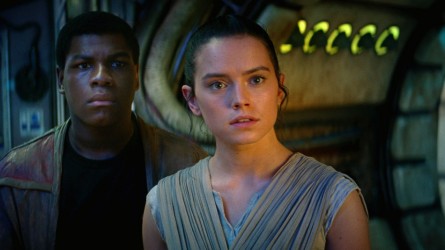 Now to the Dark Side: Let’s get this out of the way now – there is a scene reminiscent of Nazi rallies in which the new head bad guy and leader of the First Order, General Hux (Domhnall Gleeson), is addressing basically every Storm Trooper ever about how great the First Order is, how cool their new weapon is, etc., and it ends with the Troopers giving a one-armed salute. I don’t think they were all waving hello to the General, but I could be wrong. And in a shout-out to the Empire, all the officers in the First Order have British accents. 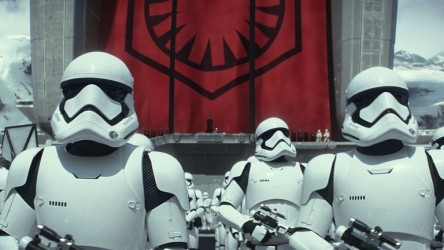 As you saw in the trailer, there’s also a bad guy with a new lightsaber, Kylo Ren (played by Adam Driver, consistently the only good thing about HBO’s Girls). I can’t say much about Kylo without giving away major plot points, so I’ll say this: he is going to make a good villain, I think. It will be fun to see how he develops across the remaining two films (assuming he’s in both). I’m actually more interested to see where they take his character than I was about learning Darth Vader’s origin story.

Were you one of the people who was nervous about director J.J. Abrams taking over the franchise? Don’t be. Sci-fi is clearly his specialty, and the story seems to be safe in his hands. Episode VII is a LOT of fun, and I suspect that Abrams deserves a great deal of credit for that. At times, however, it’s a little too much like A New Hope. One of my Star Wars Super Fan friends wrote to me after he and his daughter saw it, and he said: “If that was any more ‘true to the original,’ it would have been a shot-for-shot remake.” I agree! Despite that, it was as entertaining a movie as I’ve ever seen. I’m hopeful that parts 8 and 9 will be just as fulfilling and fun.