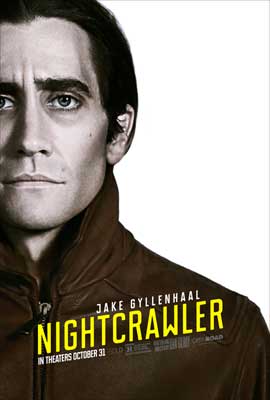 When planning your work is not enough

Despite being categorically different in tone, Nightcrawler is similar to Carancho in featuring cottage industries named in generic, often pejorative fashion. Except an honest assessment of Nightcrawler would do well without two things, to be fair: heaping plaudits on the performance by Jake Gyllenhaal, and; partaking in fanboy fuckery extended to a character that no sooner than encountered in real life would send said fanboys for the hills. As a satire, and Nightcrawler ultimately shouldn’t be seen beyond one, the cheers are expected. Same with the idolatry for a sleeper hit. But its Shakespearean undertones and eye for zeitgeist are worthy of highlight.

From the onset, Lou Bloom has seemingly sold his soul for material gain. Sounds familiar? It is the American dream unhinged, and startup fever with a twist, when he stumbles upon a crew filming a gruesome highway crash and decides its his calling. With no time to pout about having been turned down twice just two scenes in, he scampers to illegally find the means to kick start his freelance enterprise: shoot and sell footage of shootings, stabbings, fires, accidents in short, the gamut of urban malaise and misfortune for the morning news networks.

Working with this night owl premise and Magnolia and Boogie Nights cinematographer Robert Elswit, Dan Gilroy delivers a stunning LA city scape without the the chaotic swoops and zoom-pans employed in 90s PTA and borrowed from Scorsese’s Casino and Goodfellas. It is more a half-Michael Mann LA than an Anderson’s. Given this isn’t the review for direct plaudits, I’ll wrap up the narrative portion and make way for the films undercurrent. 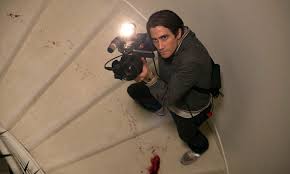 Bloom starts selling exclusively to one station and one contact, Rene Russo as embattled news director Nina, and sets his eyes on bigger shares, bigger checks, in short, bigger everything. With Nina, despite stark roles in news gathering, Bloom finds a symbiotic partnership that mutually enables a shared lust for coverage. Nina, twice his age and far too gone to recoup any morality compromised in years in local news, takes a liking to his efficient work rate, but not much for anything else. Unlike Nina, Bloom never had any morals to forfeit in the first place, so call it denial and pride in refusing someone so green has gotten up to speed to match wits with her seasoned pedigree. And not for want of trying she reciprocates none of his coercive advances in one chilling scene showcasing Blooms depravity and cunning.

Maybe after all Jake Gigglinghaal’s performance is equal parts nuance and a natural gift to creep. Is it the eyes? The jesters smile? A likeness to the Anonymous/Guy Fawkes mask? It still remains that this generation clamors so much for its own Travis Bickle just to have an antihero it clouds their judgment as to what the implications of cheering for a perverted and sick fuck like Bloom truly mean! Well, it’s all fiction and I’m starting to sound like a fogey.

Blooms operations expand until the only thing standing between him and the next level is less scope and logistics than a willingness to abandon ethics altogether in the pursuit of ratings drivers and a sure sale. Whereas Joel brah Loder (Bill Paxton) sees calls and square miles, Bloom only sees red and green. As in gore and money. When Loder arrives first to a blazing plane wreckage on the hillside, it becomes clear that to Bloom green is also for envy and that he shall never arrive late for a scene again. 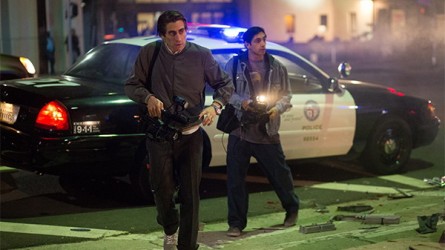 The films centerpiece sequence is tense the second time around ensuring it eventual cult status. What unfolds around it is pure magic. An exhibitionism of the grotesque and sensational married to deliberate choreography. An amalgam of the perishable nature of news, real life anchorwoman Christine Chubbuck’s suicide on live TV, and the opportunism surrounding Howard Beale’s promise of one in Network except masterminded from afar and staged carefully to account for actual self-preservation. Snuff movie buffs, take note when you decide to watch this film. Bloom stumbles on a robbery homicide in progress and is allowed first dibs and he therefore withholds from everyone parts of the footage for an ideal time. Though never shown to sell to others, he dangles the threat thereof when negotiations stall with Nina. Like a toxic relationship rocking and teetering at the brink of break-up and make-up. Mind you, his asking price is exuberantly precedent-setting but she meets him halfway (a negotiating lesson for dick-riding fanboys). The tape is played then paused only for the editor to be asked to leave so that the two have a moment. They turn to face each other in a will-they-will-they-not swap saliva moment. Instead, we get a Lady Macbeth look from Nina with the frozen tape in the back framing the Netflix and chill craze in glorious self-awareness.

By which point if you haven’t gotten the memo, the film reveals its satirical intentions. Lou’s characterization throughout,replete with pseudo-corporate intellectualism and anchor-like delivery while thoroughly consistent, is unlike Nina’s. Hers breaks away from pattern in this pivotal, Macbethian scene, ditching realism for the surrealist and theatrical. Though its a mystery had she appeared one more time if her mannerisms were a momentary dramatization or how an embattled news director would react to a career jackpot, it is too jarring a turn to just chalk up to actors interpretation and not a director’s vision. And thankfully, perfection is left unspoiled by redundancy. This set up allows Lou’s final scene to close out the entire affair in conforming satisfaction, the only way it should.

There’s no doubt, Jake Ooglinghall has been on a roll since the muddled mess of End of Watch. A brief run impressive enough to make you want to hail his turn here as the inevitable crescendo of improving performances. He’s come a long way since Donnie Darko and October Sky, and God knows what duds he’s been in since but just as surely Everest and Southpaw had to happen. And with two collaborations with Denis Villeneuve to start his home run run streak, I’m that skeptical again.