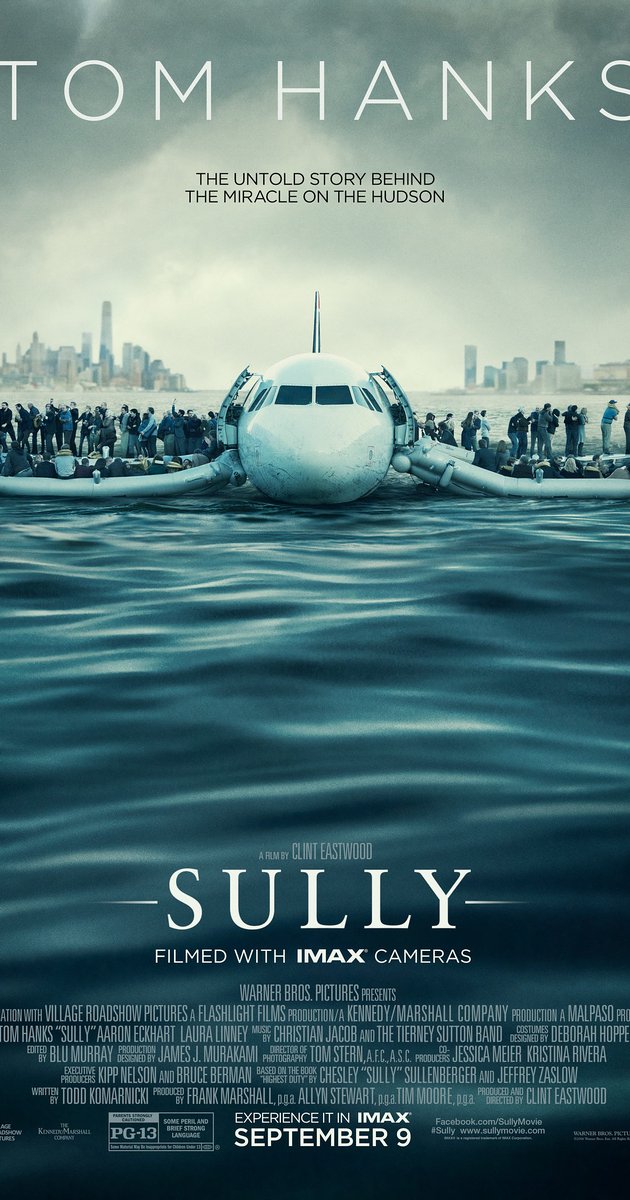 The story of Chesley Sullenburger, who became a hero after gliding his plane along the water in the Hudson River, saving all of the airplane flights 155 crew and passengers.

Sully, the latest masterpiece from Clint Eastwood, was a near perfect film. Even though everyone in the audience already knew the outcome, most viewers were still riveted in their seats, mesmerized by what they were seeing on the screen. Tom Hanks was magnificent as Sully, perfectly reflecting his courage, quiet confidence, compassion, and his agonizing internal reflection and self-appraisal. Plane crashes kill people, usually all aboard. Chesley Sullenberger, with an amazing display of skill and calm, landed U.S. Airways Flight 1549 in the Hudson river, saving the lives of all 155 aboard. The movie Sully tells this story in 96 minutes of movie magic. 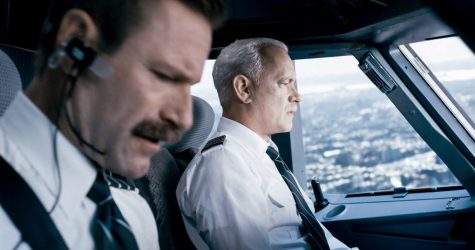 In case you are not aware of the story, Sully is based heavily on the true events of January 15, 2009, when the pilot Chesley Sullenberger successfully landed (not crashed) a U.S. Airways jet in the Hudson River after running into a flock of Canadian Geese. All 155 passengers and crew survived. Sully was hailed as a hero, but the NTSB launched what was seen as a witch hunt, second-guessing the pilot on his decision to ditch the plane instead of trying to return it to LaGuardia Airport. The movie chronicles these events, along with the angst of pilot Sullenberger, in a non-linear fashion. There is a line in the hilarious novel Dead Solid Perfect,in which the protagonist Kenny Lee Puckett, who was a professional golfer, daily wrote out on a notepad his list of woes. One item he always wrote was “Self Doubt Sucks”. Sully takes the line from this book as the very essence of Eastwood’s movie is the inner struggle that Sully grapples with throughout the movie.

Tom Hanks is not an underrated actor, but he may be an underappreciated one. Everyone expects great performances from Hanks, and he does not disappoint in Sully. Clint Eastwood does not disappoint either, as he streamlines this film into 96 minutes of chair-gripping greatness. It is difficult to execute a film when you are restricted by the reality of a historical event, but Eastwood manages to do this beautifully. In a supporting role, Aaron Eckhart showed again why he is one of Hollywood’s most versatile and talented actors. Skiles had Sully’s back all the way, and never has a supporting actor been more supporting in a film.

The only real distractions in the movie were the inexplicable scenes with Sully’s wife nagging him about financial problems. To his credit, Sully fielded and filed away these distractions while he was mentally dealing with the much more pressing issue of the NTSB investigation. There is controversy about the actual role of the NTSB as a villain, but if Hollywood needs one, Hollywood makes one and according to accounts by Chesley Sullenburger, the characterization was well deserved, in spite of protests from actual NTSB members about the film.

In the end, Sully used the same skills that he used in piloting the plane to pilot the investigation. In an ice-cold logical tour de force, Tom Hanks showed why he is one of the world’s best actors and why Sully was one of the best pilots. Sully was a very satisfying film

Sully is a solid 8/10 and one of the bright spots in a lean movie year.