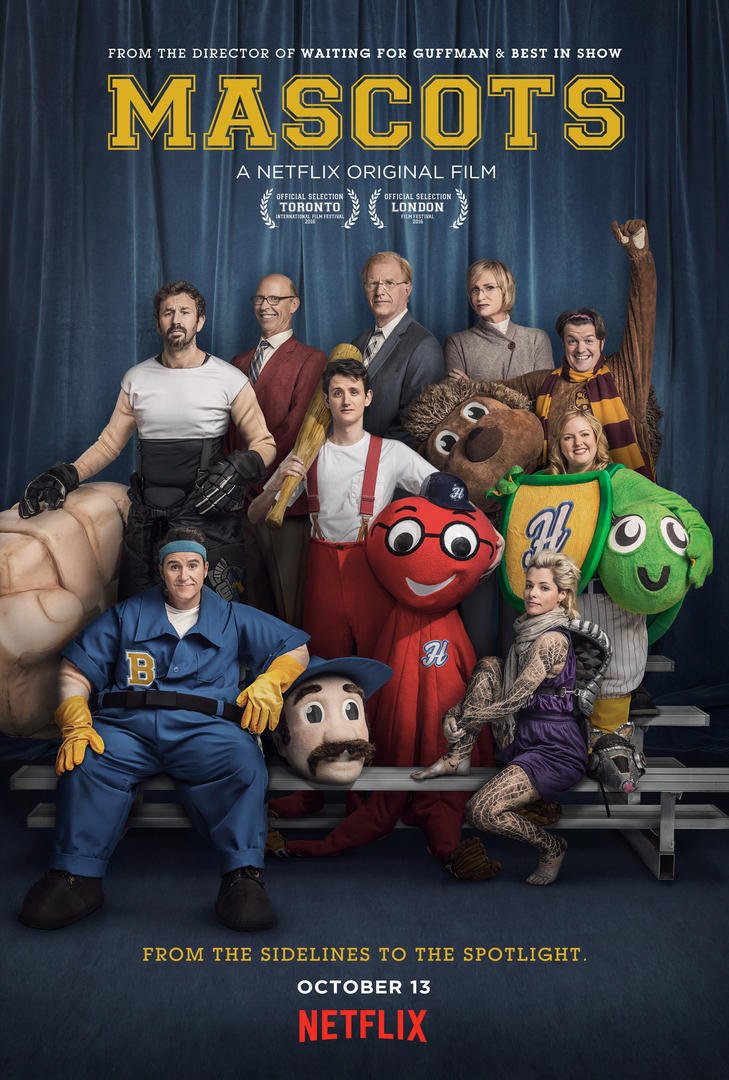 A look into the world of competitive mascots

If you have read my reviews before, you know how much I love an introductory paragraph. But not this time. I’m going to cut right to the chase: Christopher Guest’s new direct-to-Netflix movie, Mascots, is not good.

Bummer, I know! I’ve had a crush on Christopher Guest ever since I first saw This is Spinal Tap when I was 10 years old. Not only did he play my favorite character, Nigel Tufnel, but even as a child I knew that he had some of the best scenes, with the most memorable lines. “These go to eleven”? Hell yeah, they do! “None more black”? You said it! “Lick My Love Pump”? Well, ok!

As we all know, Spinal Tap was written by Guest, along with Michael McKean, Harry Shearer, and Rob Reiner, and it set the bar for “mockumentary” filmmaking. It’s a concept that Guest has carried through his career. He teamed up with Eugene Levy to write the 1996 cult classic Waiting for Guffman, 2000’s Best in Show, and 2003’s A Mighty Wind. The collaboration between Guest and Levy proved successful, and the bar for mockumentary films was raised even higher.

For the purposes of this review, I’m going to ignore 2006’s For Your Consideration (like so many movie-watchers), because it was a departure from the mockumentary style that Guest (and his fans) had grown so fond of. So here we are, 13 years after the release of A Mighty Wind, and I happened upon this trailer.

Holy shit! A new Guest movie, filmed in his signature style, and centered around a kitschy subject matter again? Sure, Guest has done movies about competitions before, but this one – about outrageous mascots – looks like it’s right up his alley. The world of silliness is Guest and Levy’s wheelhouse! Just one problem: Levy didn’t help write this one, nor did he appear in the film. But would his absence make that much of a difference? Well…yes.

Mascots was written by Guest and Jim Piddock, who has appeared in several of Guest’s films, and who, along with Guest, created the HBO show Family Tree (which wasn’t very good, in my opinion). But Levy’s absence isn’t the only problem. Fans of Guest have come to expect the same core group of actors to appear in his movies: McKean, Shearer (sometimes), Piddock, Catherine O’Hara, Jane Lynch, Ed Begley, Jr., Jennifer Coolidge, Parker Posey, John Michael Higgins, etc. And Mascots has…most of them. Notably absent, in addition to Levy: McKean and O’Hara. Harry Shearer’s voice is in the movie, but that’s it. What’s more, the usual suspects (Lynch, Begley, Coolidge, Posey, et al,) are essentially peripheral characters. Is this Guest’s way of transitioning to a new (younger) core acting troupe? Maybe! Could there have been scheduling conflicts that prevented people from appearing often (or at all) in Mascots? Also maybe! Is the universe filled with infinite possibilities? I don’t know, I’m not a scientist!

What I do know is this: there is something special about the way in which Guest and Levy work together. Collaboratively, their humor is sharp, sometimes biting, but also has a lot of heart behind it. Waiting for Guffman, while absurd, pulled at the hearts of anyone who ever wanted to “make it.” Best in Show wasn’t just for dog-lovers; it was for anyone who recognized the “pageant moms (and dads)” in our lives. And while on the surface, A Mighty Wind seems like it has a silly premise (a reunion of folk bands!), it is – at its core – a love story. All three movies are rich and full stories. Mascots, with a rushed storyline and forced jokes, does not match up with its predecessors. With apologies to Jim Piddock, who is a fine writer, Mascots feels like only half a movie.