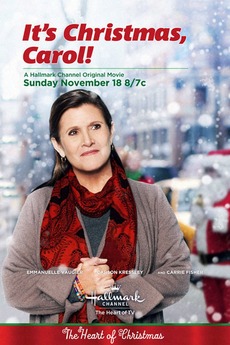 Yet another modern rendition of the Dicken’s classic

It’s Christmas, Carol! (2012) is yet another made for TV rendition of the Dickens classic. I had just about given up on Hallmark as some (most) of their Christmas programming is absolutely dreadful. I’d rather go visit the local church and attend their services than watch most of the family and God crap on that channel. Their musical version of Scrooge is unwatchable and will not be reviewed. While not coming close to the best of the classic version, It’s Christmas, Carol! has its moments while being a little overly sappy at the end.

Carol is the CEO of a large publishing company, the largest and most important, and The Devil Wears Prada had nothing on this bitch. She was driven and heartless and her employees loathed and feared her. She set the tone with an incredibly tense meeting where she dominated, slash and burn style, and abruptly fired one of her top executives for merely suggesting that she publish a certain manuscript. This took place on Christmas Eve and Carol also ordered everyone into the office on Christmas day, to work. 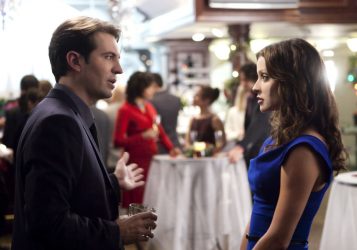 While attending a Christmas party that night, her employees avoided her, but she ran into an old boyfriend who was a writer (hint, hint) and we sensed that there were still feelings on both sides. Carol visited the ladies room to compose herself and was shocked and surprised to be visited by…you guessed it, A Ghost! This Ghost was her former boss, named Eve, played by Carrie Fisher. Instead of 4 ghosts like in the traditional story, we only had one in this modern version. Now Carol is not the type of person to not be in control, and certainly did not believe in ghosts, so she played the bah-humbug card till near the very end. The Eve Ghost predictably took Carol to the Past, the Present, and ultimately to the Future and Carol was forced to reflect on her abused employees, her neglected mother and her dumped boyfriend. Carol ultimately experienced redemption and the balance of the movie had her rebuilding bridges to those that she had wronged.

Emmanuelle Vaugler is drop-dead gorgeous, but she also displayed incredible acting skills in this movie. Unlike Scrooged, this version actually translated well to the modern setting as they played it simple and straight, without any cheesy shock value scenes. There were no scary ghosts, monsters or special effects, only competent acting. In this case, less was certainly more. Carrie Fisher was great as the Ghost and projected the perfect balance of humor and seriousness. They even managed to get in a couple of Star Wars quips, which was a good touch. I’ll even forgive the intense sappiness at the end, and this one gets the Goat Christmas Seal of Approval.