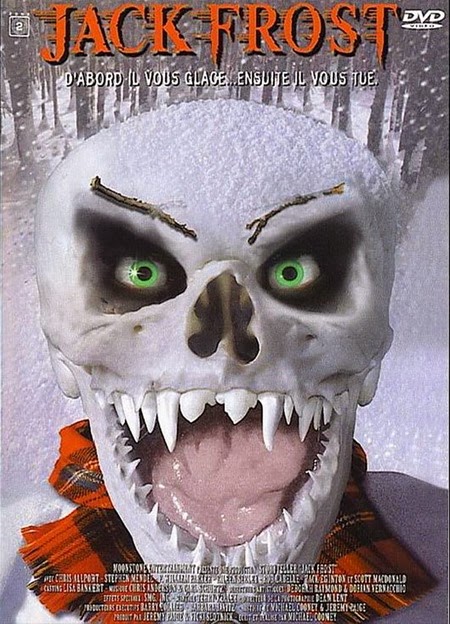 Jack Frost (1997) is a Christmas horror movie that has the distinction of having the worst fake snow in the history of cinematography. Unfortunately, that is the only normal distinction that this “movie” has, and I use the word “movie” in a theoretical sense only. Yes, this is a cult classic and for sheer campiness, it is off the chain. I thought the killer tire in Rubber was about as dumb as it could get, but here we have a killer snowman. What can we possibly do with this movie? How can it possibly be reviewed objectively? When all else fails, we have the 80’s Action Format! 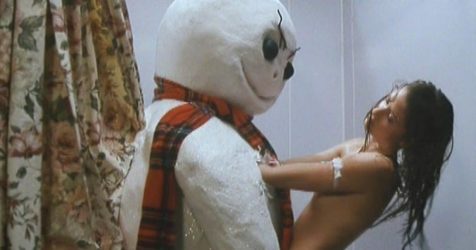 It looks like there was a total of at least 10 deaths in this movie, not including the snowman. This is not a huge body count by any standard, but considering the quality of the deaths rendered, the number was quite adequate. The Metzners fared the worst of all, as all 4 family members were brutally murdered.

All of the deaths were novel, but the annoying Sally being electrocuted and crucified on the Christmas tree had to be the best death of all. 10/10, especially with the comment of the deputy.

It was beyond terrible, but infinitely camp and re-watchable. The quotes and one-liners were relentless and were some of the best ever for a movie like this. There is also a Jack Frost 2. Both movies are watchable free on YouTube.

Boy Howdy! Sam was the sheriff that initially brought in the serial killer turned killer snowman. Throughout the movie he was verbally and physically abused by almost everyone. In the end, like Ash in Evil Dead, he finally grows a set, and is the hero that saves Christmas and his shitty little town.

The Federal Government was again surreptitiously conducting genetic experiments. Things, as always, go terribly wrong and the government agents are clueless as to how to rein in their messes.

No, but there was a ceremonial baptism in a truck bed full of antifreeze.