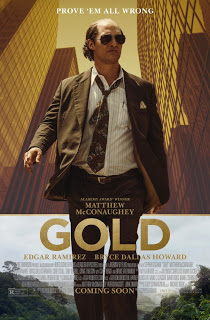 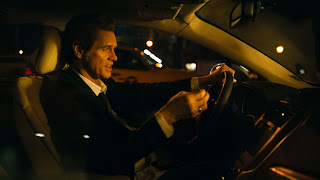 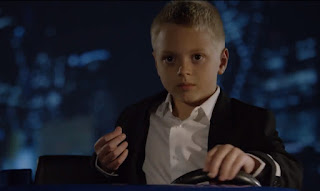 No, that’s a child making fun of McConaughey. 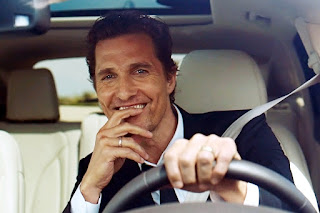 There we go. Ahhhh.

Now that that’s over, you can focus on reading about Bre-X, the company this movie is based on. If you have no idea what Bre-X is, do not look them up before watching Gold or you will SPOIL the movie for yourself. Also, do not read the rest of this review because, obviously, I’m going to talk about it.

Once you have seen this movie and read about the Bre-X mining scandal, you’re going to wonder the same thing as everyone else why did they change so much of the story? The real story is bonkers enough. In the mid-1990s, a Filipino geologist working for Bre-X minerals convinced another geologist and an investor that he had discovered gold in Indonesia. Bre-X’s stock skyrocketed from pennies to nearly $300 per share over the course of two and a half years. As it turns out, the Filipino was salting the core samples from the site with shavings from his wedding ring, then with river-panned gold he bought from the locals. The Indonesian government took over the site after the three men sold a bunch of their stock and allowed another company to continue mining. After finding zero gold, the Filipino supposedly committed suicide by jumping out of a helicopter. The stock became worthless, the investor denied everything and died two years later, and the second geologist was acquitted of crimes and moved to the Cayman Islands. I mean, come on that script writes itself. The only problem is how to make McConaughey look like a Filipino.

This being Hollywood, they changed things both big and small. To start with, the second geologist and the investor were mashed together to create Kenny Wells (McConaughey), an American miner who managed to wreck his fathers prospecting company to the point where he was running the remains of the business out of his waitress-girlfriend Kay’s (Bryce Dallas Howard) bar. That forty pounds makes sense now, doesn’t it?

In a drunken fever dream, he sees a jungle and knows he will find gold there. The next day, he remembers stories of a geologist named Michael Acosta (Edgar Ramirez) who theorized the location of gold in Indonesia. Acosta is what the writers of the film created out of the Filipino geologist. Wells flies out to see Acosta and convinces Acosta to partner with him on the dig. After weeks of digging, they find nothing and Wells catches Malaria. Upon Wells recovery, Acosta informs him that they’ve found gold to the tune of 1/8th ounce per ton of rock. Yeah they struck it rich! I think. Wait, is that a lot? It doesn’t sound like a lot. Or did I just misunderstand the number? No matter, they struck it rich!! 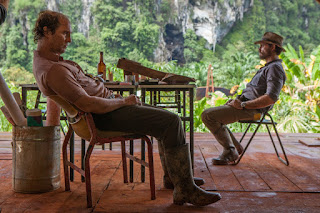 This is what you look like when you have have gold fever and jungle fever at the same time.

The rest of the film bears very little resemblance to actual events, but a whole lot of resemblance to a combination of Two for the Money and The Wolf of Wall Street. Rise to the top, lavish spending, helicopter sex, etc. followed by the fall from grace. The movie tries to make Wells somewhat sympathetic by making him care more about being recognized as a great miner than money. Potato, pot-ah-to, right? This leads him to declining multiple lucrative offers for the mine and you can guess where he ends up. The film also tries to make something out of his relationship with Kay, though it falls completely flat during the film and Howard is given very little to do outside of a breakup scene that comes out of nowhere. Finally, they try to play up his loyalty to Acosta, and that turns out to be the one thing that makes you root for him just a little bit. To be fair, the film keeps the scandal part Acosta salting the samples, cashing out his stocks, and possibly dying in a helicopter suicide jump (but not from the sex helicopter).

In addition to adding the girlfriend and changing the characters, the film is set back in 1988 and the timespan is shortened to about six months for no reason. They also toss in two different investment companies vying for Wells to partner them in, but really in order to give screen time to Stacy Keach and Corey Stoll (and Stoll was delightfully on target as a sleazy Wall Street investor), but they at least serve the purpose of moving Wells through his rise and fall. Perhaps the weirdest creative choice is Bruce Greenwood doing a bizarre accent while playing a gold magnate and forced to look at naked, fat McConaughey when they first meet. I get what the writers were going for there contrasting a fool with a viper but Greenwood can’t un-see that. That’s just mean. 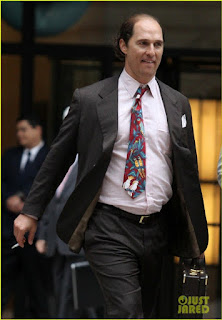 I get older, but they stay the same age.

(Note: Rachael Taylor is also naked in that scene, so its not all bad for Greenwood. Probably still not worth it though.)

Having said all that, I don’t really mind that they changed so much from the real story, but I do wish they hadn’t thrown in the unnecessary girlfriend subplot. It drags the movie down and doesn’t change your opinion that Wells is mostly a bad businessman and comes off like a used car salesman. But the thing I mind the most is that the film tells you almost from the beginning that everything is going to go south for Wells. Early on, we see a panning shot of a microphone and hear Wells talking to someone who is obviously questioning him. As soon as you see that microphone, you spend the rest of the film knowing Wells is going to fail, you’re just not sure how. Unless, of course, you ignored me and read up on Bre-X prior to watching the film. I actually went into this movie thinking it was going to be a story about a man who defied the odds and ended up proving everyone wrong. I was looking forward to some crazy hi jinks and close calls, but an inevitable win in the end. Thanks a lot, writers the one time I don’t go into a movie pessimistically and you ruined it for me.

Still I did find myself enjoying the movie quite a bit. McConaughey brings his A-game, you can never get enough Stoll, and its much better than the typical January fare were used to seeing. And, even though I knew things were going to end badly, I never suspected the salting scandal, which was a genuine surprise. I just thought the fool was going to get taken by Wall Street sharks, not his friend. Does Hollywood deserved to get smacked around a little for messing with this nutty, true story? Sure. But that doesn’t mean it still wasn’t worth a pat on the back.

Rating: Ask for two dollars back and never look at the Gold movie poster again.