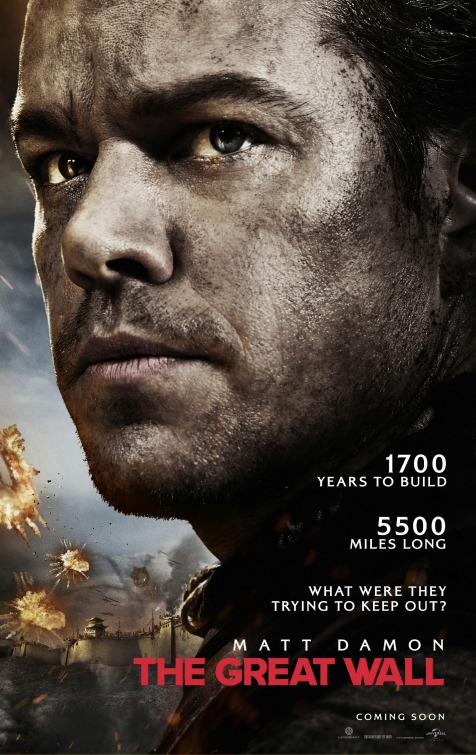 I’m not sure how, but I managed to avoid trailers for The Great Wall until the night before the screening. I wasn’t even trying to avoid them, I just hadn’t seen any for this particular movie. Prior to seeing that trailer, I thought The Great Wall was a historical fiction in the vein of Tom Cruises The Last Samurai. Yes, I can hear you laughing. When I saw those weird dragon-y looking monsters in the trailer, my immediate reaction was nothing. My brain just froze for a few moments because there’s no way it saw what it just saw. Was that really Matt Damon in a medieval monster movie? Oh Matt.

The good news is that I reset my expectations by negative one million prior to watching The Great Wall, which allowed me to enjoy it quite thoroughly. Yes, I can hear you laughing. I’m not saying it was a good movie and I would never defend it if you told me it was terrible. I’m just saying I enjoyed a February popcorn flick because I had the appropriate expectations going in. Though, I do wonder what my reaction would have been had I not seen that trailer. There’s a chance I would have hated it, but I don’t think so. I probably would have just been incredulous for a while, then had that epiphany moment of “ooooohhhhh. Oh ok. Got it.”

As an added bonus, the 3-D projector got out of sync about thirty seconds into the film and almost blinded the audience. Trust me, you don’t want to see how bright the green and pink are when the projector goes on the fritz. I thought this was a bad omen at the time, but turned out to be the worst thing about a movie featuring monsters with eyeballs in their shoulders. 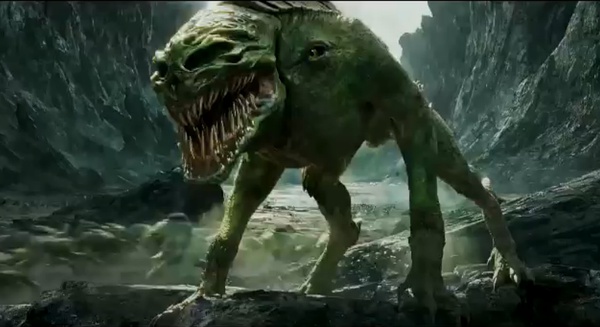 While you clean up that drink you just spit-taked all over, here’s a summary of this movies, um, plot. Every sixty years, a horde of monsters attempts to breach the Great Wall of China to get to China’s capital so they can eat all the people there. This fight has been going on for hundreds of years and the Chinese have developed a multitude of defenses, including color-coding their army by job, developing gunpowder (or black powder, as the movie refers to it), installing massive scissors in the middle of the wall, and convincing the fairer sex to bungee jump off of giant outcroppings into the monster hordes with nothing but a spear and a hope that the monsters don’t time their jumps properly or jump in quantities of more than one.

Meanwhile, William (Damon) and his pal Pero (Pedro Pascal) are searching for black powder in order to take some back to Europe to sell and get rich. After being chased by Mongols and killing a monster, they end up at the wall and are taken prisoner by the Chinese Army. When the Chinese guard can’t find the key to open a prison cell, they take William and Pero to the top of the wall and put them in timeout (no, I did not make any of that up). The monsters attack, Willem Dafoe shows up, and William and Pero save the day. I guess all the Chinese really needed was Archery Jason Bourne.

The rest of the movie is a series of monster attacks and nifty Chinese counter-measures, with a pinch of Pero and Sir Ballard (Dafoe) plotting to escape with some black powder during the next attack and William stepping into the Hero’s Journey role of hero quite nicely. Hes reluctant at first, has a special skill, falls for the lady general, Lin Mae (Jing Tian), slays some monsters, falls from grace, gets back up again, and flies a hot air balloon running on gunpowder to save the capital. If you hadn’t figured it out by now, this movie is bat shit crazy. 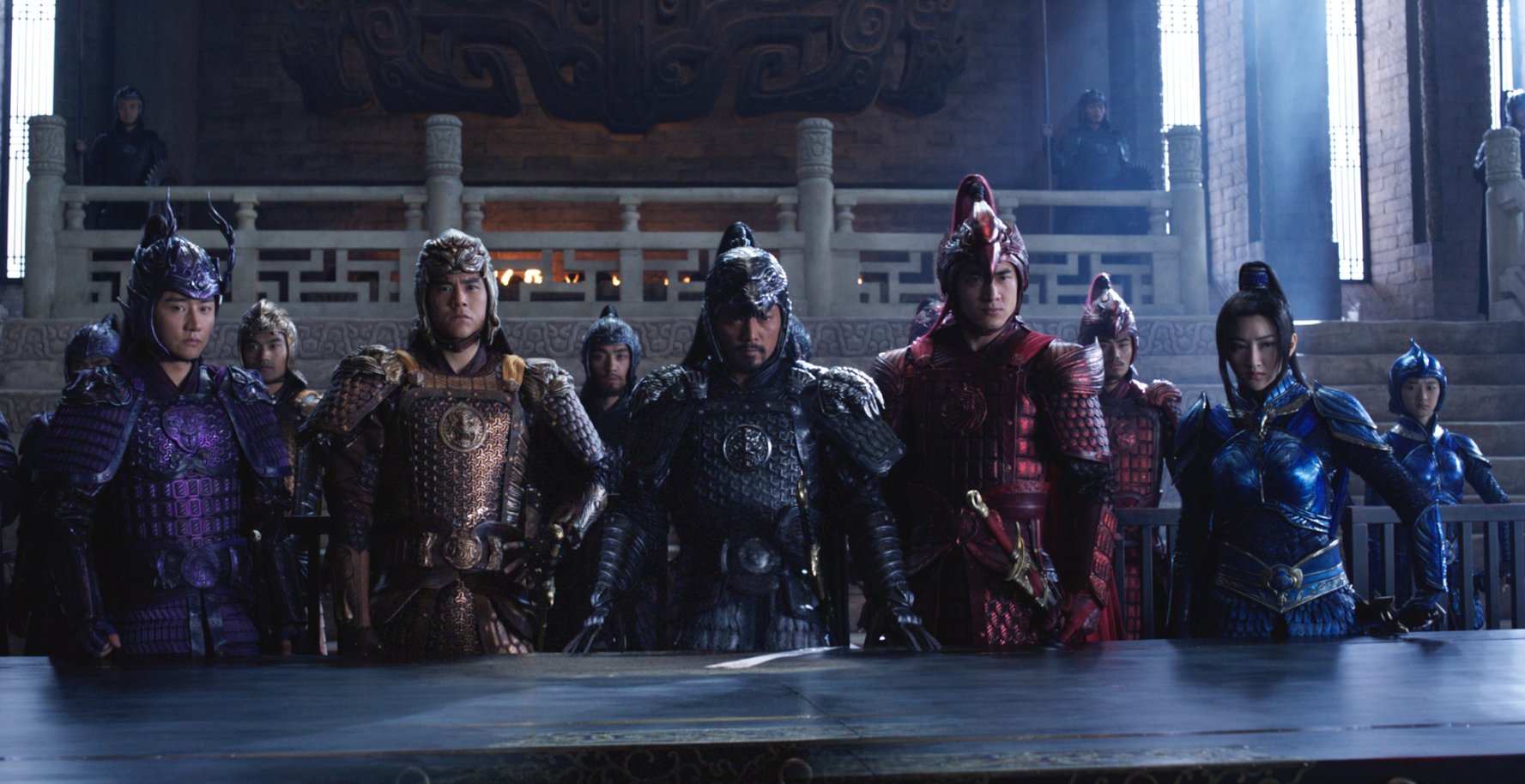 Since I enjoyed the film, I’m not going to tear it apart any more than I already have because it doesn’t really deserve it. It knows what it is and runs with it. However, there is one plot element that is too stupid to let go and that would be Sir Ballard. He tells William and Pero that he has been there for twenty-five years, which makes no sense when the Chinese generals tell us that they kill all interlopers in order to “keep their secret.” Dafoe has no skill we are ever shown and the only reason they don’t execute William and Pero is because they brought the leg of the monster they killed and the Chinese thought it might be useful to keep the two of them around for a while. So why is Dafoe alive? Did the Chinese generals watch Platoon before they caught him and were terrified or are they just big Spider-Man fans? Either way, his character is absolutely pointless.

By now, you must be wondering if I lost my mind for during this flick. As ludicrous as this movie is, you can see that they at least tried to put some thought into elements of the film, though story wasn’t really one of them. The creatures are pretty creative, even if shoulder eyeballs is funny no matter how many times you say it. Also, the eyes are their vulnerability, so Williams ability to Robin Hood (its a verb now) is extra vital and kind of hilarious at the same time. I already mentioned some of the defenses, which really satisfy that 12-year old kid in me, as did the visual effects in the film. And, despite a pretty bad Irish (I think) accent from Damon, he and Pascal have a pretty good chemistry together and Pascal brings some quality comic relief to the table as well. Not to mention Jing Tian was quite good and her role as leader felt authentic. She didn’t take shit or fall into the typical trap of deferring to the hero and the movie was better for it.

She’s trying to decide where that knife should go.

Yes, this movie definitely belongs in February and sounds like a cheesy Sy-Fy channel flick, but I feel like the filmmakers gave this film an honest effort. Maybe I was just in the right mood after watching the abysmal Fist Fight two nights earlier, but sometimes that’s all that matters. Yes, I can still hear you laughing.

Rating: Worth a Redbox rental unless monster siege movies are your thing – then you’ll love this movie.