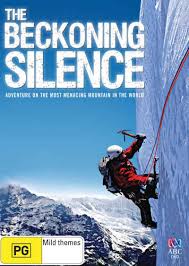 The Docu-Movie Touching the Void is the Godfather of all mountain climbing movies. Just watching this movie turned Roger Ebert into a quivering, blubbering mess. Touching the Void is a Docu-drama based on the calamitous events that occurred when Joe Simpson and Simon Yates attempted to ascend and descend the Siula Grande in Peru. Beyond all odds, Joe Simpson somehow survived this ordeal where he was presumed to be dead, in a reenactment that must be seen to be believed. Joe lost 1/3 of his body weight and the injuries to his leg were so severe that they required multiple surgeries over a period of 2 years. He was told that he would be lucky to ever walk again, much less climb. He did walk again and he did climb. He also wrote a couple of books and made two mind-blowing documentaries about mountain climbing tragedies. The Beckoning Silence (2007) is one of them. 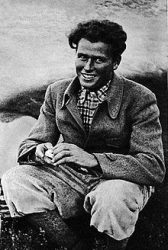 In The Beckoning Silence Joe Simpson traveled to the North Face of The Eiger to give an account of one of mountaineering’s most deadly tragedies. This tragedy was the ill-fated expedition of Toni Kurz and his 3 companions in 1936. Joe Simpson methodically and carefully sets the stage for what will be a totally catastrophic revelation of horror midway through the documentary. Joe Simpson had been there before. Not at this exact time and place, but in about as a precarious and hopeless dilemma as you could ever rip from the bowels of an icy hell. I didn’t want to watch it anymore. I wanted to just turn it off and look away, but I didn’t. From the mid-point on, the viewer is riveted to this train wreck in the Alps, and yes, there is a train that plays a part in this real-life horror show.

After the nightmarish and harrowing ordeal that he went through in Peru, for Joe Simpson to even write about the disaster of Eiger is amazing, much less to make a documentary about it. It was even more astounding for him to actually climb this mountain to the point where these four men died…I just don’t have the words to describe this. This guy has a set that would make John Holmes look like a eunuch, but that’s another story. The re-enactment by the actors was superb, as well as excruciatingly painful to watch, as you already know the outcome. The unforgiving attributes of Mother Nature were well known, and never had they been more unsympathetic than with this alpine terrain and its weather. Mother Nature has no Fairness Doctrine, only the cold, hard physics of the atmosphere and its lapidary counterparts. Granite is hard, water freezes at 0 degrees C., it is cold and slick, and gravity asserts itself every single fucking time. 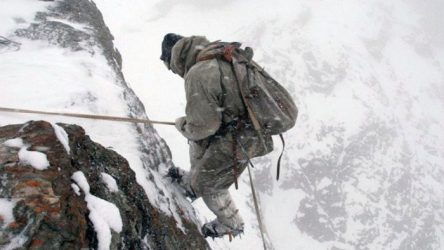 Inches and details count, and Toni Kurz was only yards away from his rescuers when a knotty problem sealed his destiny with The Grim Reaper. I know that I have previously shown disdain for mountain climbers, and this outcome was very hard to watch and to accept, but it happened. This event had a significant impact on Joe Simpson and helped shape his life. “Why him and not me?” has never been a more soul-piercing reflection for Joe, who also dangled and danced with death at the end of a rope, while staring into the void below. If you believe in God, destiny, benevolent karma and fair play, don’t watch this movie. If you want to see what nature is capable of, with with no malevolent intent whatsoever, watch this documentary.