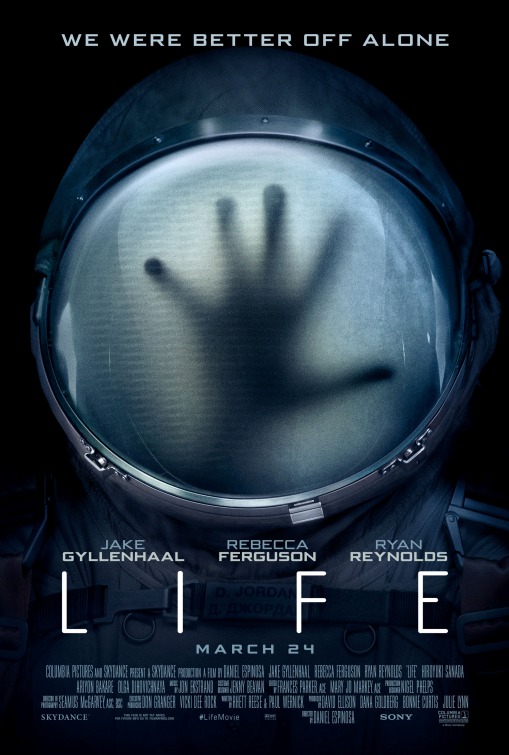 Six astronauts wreck the International Space Station while fighting with a Martian smarter than them.

Don’t you hate it when the first half of a movie is really good and the second half is a mess of shit? Welcome to Life, a movie that builds some of the best tension I’ve seen in years, then loses its mind in the interest of novelty deaths. Life reminded me a lot of 2015’s The Lazarus Effect. It hooks you in almost immediately, sells you on a great start, then steals your wallet. But at least nobody turns into a demon in Life.

Life is your typical cabin-in-the-woods film, except the cabin is the International Space Station (ISS) and the woods are space. I should have known this movie was going to let me down, to a certain degree, by its prologue. The film opens with a probe racing through space when it gets hit by a meteor shower. Cut to the ISS where six astronauts are waiting for a probe with samples to return from Mars. Since the probe is damaged and out of control, their plan is to catch it with the robotic arm attached to the outside of the ISS. The depiction of this catch is beyond comical, whipping the arm back and causing the entire station to violently shake. Somewhere, Neil deGrasse Tyson is having a stroke. However, that’s not what makes this scene so bad (even though it’s bad enough because of that). It’s that it is completely irrelevant and unnecessary to the entire rest of the movie. If the film had started off with the probe already there, nothing in the story would have changed. I get that the filmmakers wanted to start the movie off with an action scene, but that time would have been much better spent developing the characters. Instead, all we learn is who the commander is and that Ryan Reynolds’ childhood baseball skills are vital for an astronaut.

And therein lies one of the biggest issues with most horror flicks. As a filmmaker, you have to convince the audience to care about the characters and root for them not to die, or the movie will be neither scary nor tense. Writers Rhett Reese and Paul Wernick spend the minimum amount of effort on character development, giving us one, maybe two, things per character. This is really sad because the movie consists of seven characters and one of them is the alien lifeform brought back from Mars. We’ll come back to Calvin the Martian in a moment (no, I did not make up that name). Here’s what we learn about our characters that is supposed to make us want them to live. 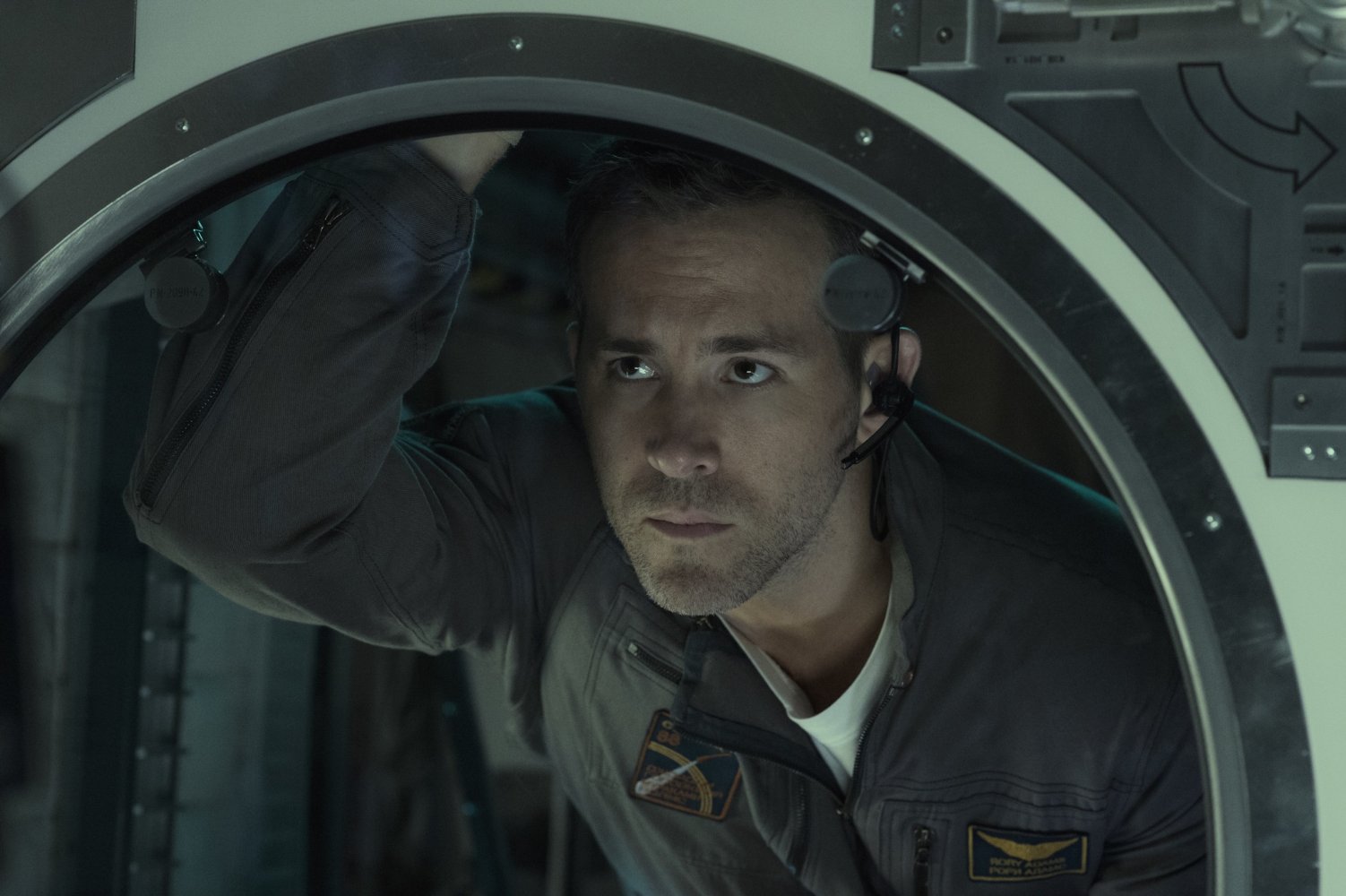 Commander Ekaterina Golovkina (Olga Dihovichnaya) is Russian, is in command, and is the second-best mechanic on the station. Also, she’s pretty hot.

Rory Adams (Ryan Reynolds) is an American flight engineer, is the best mechanic on the station, and is the comic relief. Also, he’s pretty hot.

Miranda North (Rebecca Ferguson), is a British doctor from the Centers for Disease Control. She has devised all of the protocols for their experiments with the lifeform. Also, she’s pretty hot.

Hugh Derry (Ariyon Bakare) is a British biologist (I think, but am not sure) and paraplegic. I can’t figure out how to comment on a paraplegic’s appearance without sounding like a complete asshole…so just know that he fits the visual standard of the cast.

Sho Murakami (Hiroyuki Sanada) is a Japanese pilot who watches his wife give birth to their child via Skype. He is probably as hot as a 57-year old man can be, but he’s no Ryan Reynolds. Or Burt Reynolds for that matter.

David Jordan (Jake Gyllenhaal) is an American doctor who has been on the station for over 400 days. He does not want to go back to Earth because he thinks people suck. He probably was hot at the beginning of his stint, but he’s not looking so good by this point. Or maybe he is; I’m just watching the ladies. And Ryan Reynolds.

If you are keeping score, that’s four people who you are solely rooting for because they are good-looking human astronauts, a new father, and a paraplegic. Yeah, it’s safe to say that probe-catching thing was a bad idea in lieu of fleshing out these characters a little more. Without character development, that means you have to care about whatever the plot of this movie ends up giving us. If you haven’t guessed by now or seen any trailers, this movie is a survival movie. The alien lifeform escapes and tries to kill everyone on board. They try to survive and eventually realize they cannot let Calvin get down to Earth. Considering Dr. Jordan’s stance on humanity (and considering the current batch of people running the United States), I’m not so sure I’m rooting against the alien. I don’t want it to kill the pretty astronauts, but I didn’t come to this movie hoping everyone would live.

I can’t quit you.

Which brings us to Calvin, the most consistently inconsistent creature since Superman. Even with the thin human characters, Calvin makes you forget them and focus on guessing when it will go Event Horizon on them. And when it does, it’s kind of awesome. The thing starts out as a single-celled organism and grows into what looks like a translucent fern, but with super strength, super intelligence, and super sight. Huh…maybe it is Superman. Anyway, everything is going smoothly until a small mishap in the lab causes Calvin to play dead. When Derry shocks Calvin with a tiny little cattle prod, Calvin attacks Derry and off we go.

I won’t spoil who dies in what order, but the moment the movie starts going downhill is right after death number one. Calvin escapes the lab room and immediately destroys the station’s communications relay with Earth. Do not ask how it knew how to do this because the movie explains it away with a single line, “Calvin is all muscle, all brain, all eyes,” – Hugh Derry. Yes, this movie wants you to believe that a single-celled organism learned astrophysics and advanced engineering by eating sugar and being “all brain.” It gets worse.

One of the astronauts goes outside to fix the relay and Calvin pops out and clings to the astronaut. In space. Now, you might not think this is so bad, that maybe this new lifeform can live in the vacuum of space. Then, you’ll remember, and be reminded on multiple occasions, that Calvin “is a carbon-based lifeform that needs oxygen and food, just like us,” again, Hugh Derry. By this point in the film, we’ve seen Calvin survive being exposed to outer space, being burned by an oxygen wand (don’t ask), and being blow-torched. Yes, I said blow-torched. Like the creatures in Evolution, this thing is practically invincible and even seems to get stronger and larger when burned, but is “just like us.” If only they had some Head & Shoulders(R) shampoo. 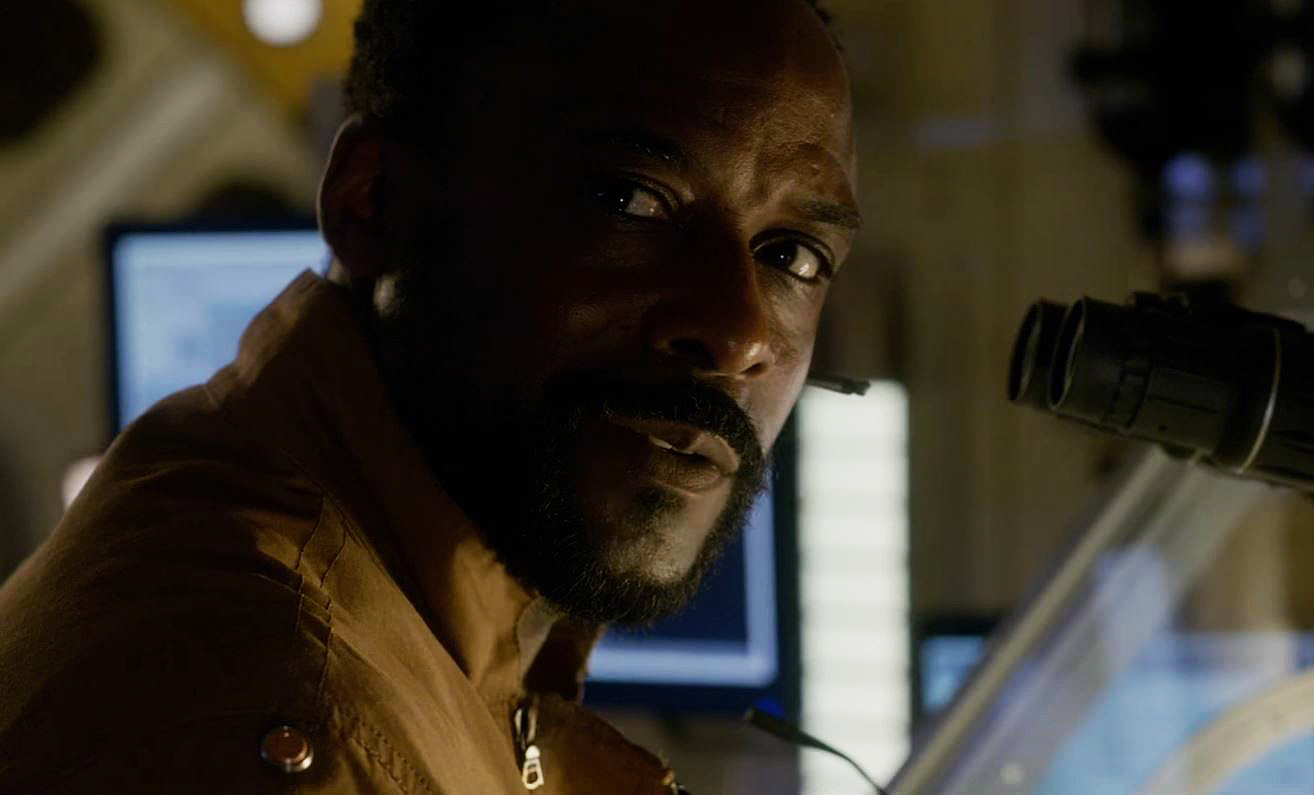 Here’s where it gets bad. After another death or two, the remaining humans’ plan is to trap Calvin in a module, seal it, vent the oxygen and decompress it. You literally just watched the little fucker crawl around the outside of your space station – this is a bad plan. I’m talking to you as well, writers. Just because you killed an astronaut by drowning him/her in his/her spacesuit using the leaked coolant from said spacesuit (seriously – nice!) doesn’t mean you get to slack off for the rest of the film.

By this point in the film, you probably also will have noticed the inconsistencies with Calvin’s reactions to things. They use the oxygen wands and blood droplets to lure Calvin, inferring that it can smell or see food. But if that’s the case, why would it attack a fully space-suited astronaut? How would it know the difference between an astronaut and a solar panel? Oh yeah – all brain. Calvin also starts off by not attacking until provoked. He doesn’t attack astronaut number one until shocked with the prod, doesn’t attack astronaut number two until being burned with the oxygen thingy, and doesn’t eat the rat until the rat bites it. So, when Calvin latches onto astronaut number three, I thought Calvin would not attack, but nope. The movie’s time is running out and we’ve got to get to the big climax scene with the final desperate plan.

Listening to folks’ chatter after the film, I’m not the only one who saw a half-baked movie. There was no clapping at the end of this film, no cheering. There were confused looks and mutterings. There were people wondering whether the movie was really over and if the last 45 minutes was just a prank. There were people wondering if they could unsee Calvin shoving its way down the throat of an astronaut because that’s just gross. And there was me, wondering how a movie could start off with such a great build of tension and fall apart so quickly while insisting, among other things, to ruin a very cool alien by giving it a face late in the film. Now, can I please have my wallet back?

Rating: Ask for half your money back and remember that “cacaw-cacaw” and “tooki-tooki” don’t work on aliens.