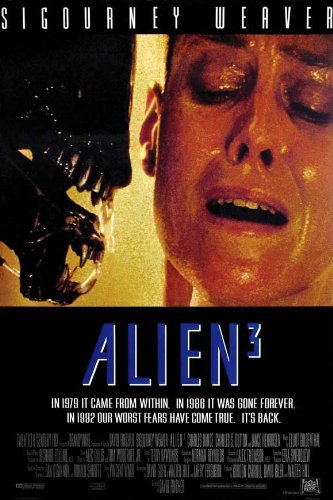 Alien 3: Ripley and the Xenomorph Go to Prison.

Is this film worth my time? Only if you’re a David Fincher completest or somebody who likes extra-sour excursions in grim-dark.

Who is this film perfect for? People who just wished that Alien was grittier, gorier, gloomier and more nihilistic.

Who will not like this film? Anybody that’s a fan of Ripley, Newt, Hicks, Bishop, or the Xenomorph. Alien 3 treated all of the established characters of the franchise very poorly.

TL,DR: Alien 3: Ripley and the Xenomorph Go to Prison.

Alien 3 was the Omen of Things to Come for 20th Century Fox. These days, there ought to be a sign outside the studio gates to Fox which says “all hope abandon, ye science fiction directors which enter here”. To give due credit, 20th Century Fox still makes some great films (Thin Red Line, Lincoln), namely when they’re doing history or low budget action films. But think of Prometheus, Titan AE, Fantastic Four, X-Men Origins: Wolverine. Even the successes like Idiocracy and Serenity have become known for their agonizing and arduous development process. 20th Century Fox is like a charnel house of studio interference, littered with the wreckage of misbegotten attempts at science fiction.

But this was not always the case. In the years before Alien 3, Fox had delivered some of the most influential classics of mainstream science fiction cinema: Star Wars, Alien, Cocoon, and Planet of the Apes? So what happened? Rupert Murdoch.

Rupert Murdoch acquired Fox in 1986 in order to build his TV empire, the Fox Network. The key to understanding Murdoch is that he is a newspaperman first and foremost. Newspapers Must adhere to deadlines in order to function. Rupert Murdoch is not a Jack Warner, a tyrant with aspirations of artistic patronage; Murdoch’s always been out to make a profit by telling people what to think. His focus was always upon growing the TV network, and the film studio was mostly just a steady generator of funds.

The other thing to understand about Alien 3 is that the script about during the time of the longest ever strike by the National Writers Guild. 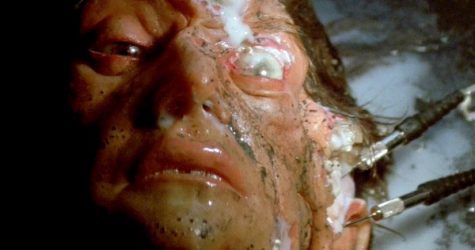 Too Many Cooks, a Recipe for Development Hell: 20th Century Fox balked at James Cameron’s highball pitch for Alien 3, and instead the producers aimed to make a sequel that kept costs in line with the budgets for the first two films. And so, the script writing process went into a prolonged development hell that was to last for four years. Here’s a list of writers involved in the project: William Gibson (Neuromancer, Mona Lisa Overdrive), Eric Red (The Hitcher, Near Dark), David Twohy (Pitch Black, Riddick), Walter Hill (The Warriors, Last Man Standing), and Vincent Ward (What Dreams May Come). You may notice that those are all writers and artists with radically different themes and motifs- Cyberpunk (Gibson), rural horror (Red), space opera (Twohy), gritty action (Hill). This resulted in a pile-on to this mulligan stew the revisions of four different script doctors, and you can understand why this film is a mess. A good rule of thumb for studio executives: if a script reaches your inbox with both more writers and more script doctors than you can count on your hands, call the Environmental Protection Agency, because you need to dispose of some hazardous waste.

OK Devon, enough about the Why, Tell us the How: The biggest dick move of Alien 3 was not only to kill all the most liked characters in the franchise, and to kill all of the likable characters early in the film, but to meditate in it, to force the audience to confront it all in a completely non-cathartic way. Yup, there’s Ripley’s adorable adopted daughter Newt- were going to rip open her naked child body with an autopsy, just so we can be sure. Hey, its the laconic android Bishop (Lance Henriksen)- now he’s begging for death, and essentially serving as a particularly ornery search engine.

But it goes further than that. Alien 3 works along an inversion of the pacing of murder in a typical horror film. Typically, the likable characters, that are more well established, tend to die later, while annoying or underdeveloped characters are dispatched first. But with Alien 3, its the more interesting characters, like Clemens (Charles Dance), that get killed early on. 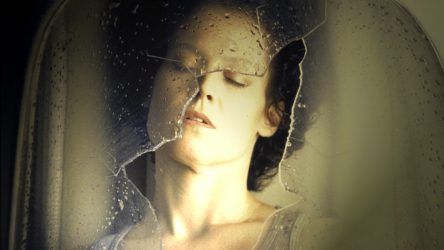 Another key flaw of Alien 3 is that it achieves a heaping pile of cognitive dissonance by negating the protagonists agency. Ellen Ripley is the first woman action movie star- not just the final girl, not just a space princess, but a resourceful, ass-kicking veteran who we have seen adapt and grow. So lets start by killing everybody she cared about. And then continue by having her nearly gang-raped, only to be saved by a more compassionate prisoner. And let’s shave her head. And have her spend most of the film running away in terror. Essentially, Alien 3 works to undercut and erase the dramatic arcs that had previously established the character.

Lastly, from a dramatic perspective, is the failure to establish the ensemble. In many ways, Alien 3 is a retread of the Alien formula- blue collar workers being picked off one by one in a shadowy industrial setting. What made Alien and Aliens work was that both films took the time to introduce and set up the dynamics of the cast- a solid thirty- fifty minutes of seeing how the characters live and work together, before any bug hunting starts. The stress and breakdown of the social dynamic is the core and critical component to the success of any film in the horror genre. If you fail to establish a social dynamic, you merely have set-pieces and spectacle to rely upon.

Poor Monster Usage: Effective monstrosity is like a strip-tease the more you show, the less you have to go with in the performance. Implication and insinuation should be the best tools of a horror director. In Alien, the monster was threatening both because it was largely unseen, and because nobody knew what it could do. Each encounter was a new revelation, and new characteristic. In Aliens, the threat came from what the monsters could do, collectively. Suddenly it wasn’t an individual but a hive, possibly even a malign intelligence guiding the horde.

The Alien in Alien 3 just behaves like a generic slasher. It grabs, it guts, it mutilates. Added to that is the poor special effects, just at the juncture of bad early CGI and under-funded practical effects. The CGI looks fake; the practical effects, for the most part, look spasmodic.

Director David Fincher had a film that had a strong tonal dis-junction from the preceding films. We lurch from relatively all-American casts to a penal colony of English monks. And which is it? A monastery, or a prison? The patchwork script vacillates between the two. The film has a lot of the grit and nastiness that would later make Se7en and Fight Club so effective, but here, its just a painfully 90s film. It is fascinating in the sense that the cinematography of this film would be so heavily influential across most of a decade- the color palettes, the sets, would all be styles that would be imitated, both in music videos (Nirvana, Tool) and in movies (Screamers). If viewed purely on photographic grounds, Alien 3 does not deserve to be disowned by David Fincher- it actually is a very good, if rough survey of this film-making style. Its a pity that the plot and the effects are such a flop. 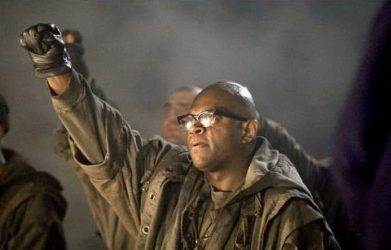 Conclusion: Alien 3 is film in the franchise that is the conventional horror film; compared to the innovations of Cameron and Ridley Scott, David Fincher’s dour nihilism is a tough serving. In some ways, its best to view Alien 3 as a stand alone, separate and detached from other Alien films. If its your introduction to the franchise, Alien 3 is a serviceable 90’s horror film, and there’s nowhere to go but up.