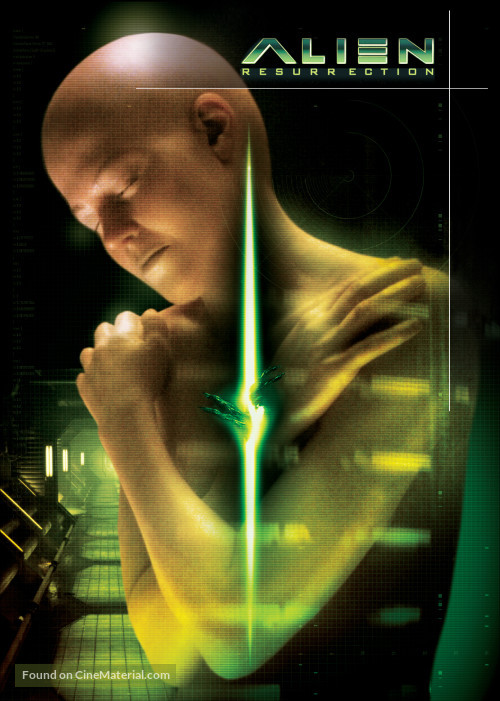 Ripley back from the dead to save humanity from itself. Again.

Allow me to begin by warning those of us (myself included) who approach new Ruthless reviews with the same sort of gleeful yips a hyena may emit when approaching the rotting carcass of a blind, three-legged baby gazelle: This will not be a wholesale evisceration of Alien: Resurrection. The perceived wisdom is that this movie is perhaps the weakest link of the franchise, and that inevitably sets it up for a never-ending sequence of broadsides from purists who were outraged at its perceived vapidity. But, as Mark Twain said in a quote I literally just made up: “to judge in situation is to negate in isolation”. If Alien: Resurrection came out as an individual movie, to be judged by unique standards, I think it would be generally thought of as a much finer example of the cinematic art. This is, at least, my thesis, and I shall begin it with an odd and barely relevant story:

Disney, paradoxically, is responsible for releasing perhaps the most depressing nature documentary ever created. In 1958 White Wilderness appalled viewers as they watched, for the first time, the distressing spectacle of Lemmings marching blindly over a cliff. Relentlessly, one by one, to be drowned in the water or smashed on the rocks below.

Such an incredible piece of documentary making this was, in that it was not just the human world that was introduced to this odd and counter-evolutionary practice, but the Lemming world as well. The Lemmings in question had in fact been scooped up from their Arctic habitat – where they tend to spend their days in regular furry animal pursuits like gathering food, being furry, and not walking off cliff-edges, and flown to Alberta to be filmed in a fake, natural habitat. When the Lemmings showed no natural inclination to walk off any ledges in Alberta, additional measures were taken, including disorientating the poor creatures before forcibly herding them off a drop into a nearby river. Thus was the legend of Lemmings walking off cliffs formed, but oddly enough it actually has no basis in fact – it just made good TV.

Anyway, the reason this fact has been awkwardly shoehorned into the Alien: Resurrection review, is that while the Lemmings weren’t accessories in their own destruction, the human world nonetheless now has them pegged as relentless idiots who literally queue up to self-immolate. If the Xenomorph world has a similar network of information sharing – probably not Disney, but we mustn’t assume anything – then they must look at humans in exactly the same way we see Lemmings. Except, with us, it’s self-inflicted. Time again, humans engineer themselves into situations of mortal peril with the universe’s most savage predatory species, resulting in immediate regret and mass death with almost clockwork predictability. Aliens must be scratching their heads in wonder – we literally never fucking learn. It’s like the Lemmings saving up, booking their own plane tickets to Alberta, then retaining, at great trouble and expense, a film crew to capture them hurling themselves into swirling waters of doom.

You get the point. And once you accept our perpetual stupidity as a species (see Climate Change denial for details), then you can settle more comfortably once again into the enjoyable spectacle of observing the disastrous consequences of scientific hubris and over-reach in Alien: Resurrection. In true human style, despite Ripley literally melting her DNA at the end of Alien 3 to avoid any more Alien research horseplay, the scientists conceive yet another method of giving the Aliens a crack at the all-you-can-eat buffet. They do this by genetically re-creating both her, and the Queen Alien that she gave birth to at the end of A3. When the scientists breathlessly explain their clever plan to her, Ripley’s bemusement is understandable since shes been dealing with these clowns for literally two lifetimes by now. Aliens are then bred to the sound of the dinner bell ringing in their scaly ears, and are kept in a sort of tank where scientists think they’re able to study their habits through the glass, occasionally blasting them with dry ice to ensure that, when the aliens inevitably break loose, they know exactly who to tear to pieces first. In reality (and this is hardly a spoiler unless you’ve not seen any other Alien movies) it’s the aliens that are observing the humans like hungry diners gazing lethargically at a fish tank outside a seafood restaurant.

Needless to say, it all goes tits-up, as the Aliens escape (which is quite cool). They then behave with a level of irresponsibility similar to a horde of sugar-high children on day-release from a mental institution. This development is naturally to the severe detriment of all other organisms on board. The crew are herded onto escape-craft by a captain whose upper back is so inexplicably hairy that simply patting him on the shoulder constitutes an unacceptable fire risk – shortly thereafter he gets eaten by a Xenomorph who presumably spends the rest of the movie coughing up hairballs in a corner. Ripley, alongside the rest of our protagonists, must escape the ship and destroy it before it gets back to Earth.

The Aliens, on the other hand, must take full advantage of the all-you-can-eat buffet before closing time. A struggle ensues, during which a half-human Alien is briefly introduced and then rapidly put through a rather extreme weight-loss program, which causes Ripley a brief crisis of conscience since she is technically the Alien’s mother. All ends well, albeit with a number of deaths on all sides, and lots of shouting and general liveliness throughout. It’s lots of fun, and only really let down by some excruciating lines of dialogue, which at points cause even the Xenomorphs to take time out from chewing on the femurs of ex-scientists to cringe at one another.

Oddly enough, the weakest dialogue of the movie belongs initially to Ripley herself, who seems to have been assigned a level of vapid flippancy throughout the film as a supposed reflection of her transcendent, genetically enhanced clone-self. Around half way through the film, this tendency spreads to the rest of the (remaining) characters, and it reads as though the writer took a weekend off and came back to work on Monday having had his brain surgically replaced with a baked potato. Luckily by that point the stage has been set and there isn’t much for anybody to do except continue to avoid death for another hour – as a result the demands on the moderately vegetative writer thereon are thankfully much reduced.

This inconsistency is made up for, more or less, by the action set-pieces which are for the most part exciting and imaginative, despite being let down on occasion by some very questionable effects. It seems at times that someone on the production company realized that there was only $8 left on the budget, so hired their twelve-year-old nephew to fill in the blanks. At one point a Xenomorph supposedly spits acid at a hapless space pirate, but it honestly looks like somebody in post-production accidentally sneezed onto the reel. 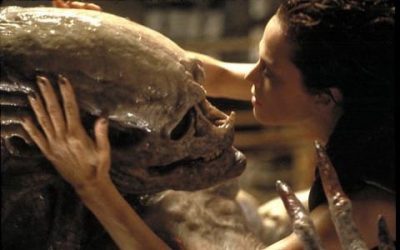 There are some genuinely interesting parts of the movie, and it shouldn’t be sneered at just because the Alien’s heritage is such a strong one. When Ripley comes across the laboratory containing the first seven aborted attempts at cloning her, its authentically disturbing, and even the most committed cynic must consider for a moment what it would feel like to come across a tortured, horribly mutated version of yourself lying helpless on a gurney, begging for you to end its life. Sigourney Weaver delivers these segments with characteristic power, and its at times like these you understand why she has been such an enduring force in Hollywood since the initial 1979 Alien release.

Overall, if somebody tells you not to bother seeing Alien: Resurrection, they’re probably being a self-important twat. The kind of person that introduces themselves at BBQs using their instagram handle, or loudly distributes unsolicited advice on zero-gravity yoga to anybody within earshot. No mate, your steak hasn’t been marinated in responsibly-sourced organic kale extract, now please fuck off. Alien: Resurrection might be on the weaker end of the franchises spectrum, but its a pretty strong spectrum, and well worth a couple hours of anyone’s time. Even Mark Twain said so.