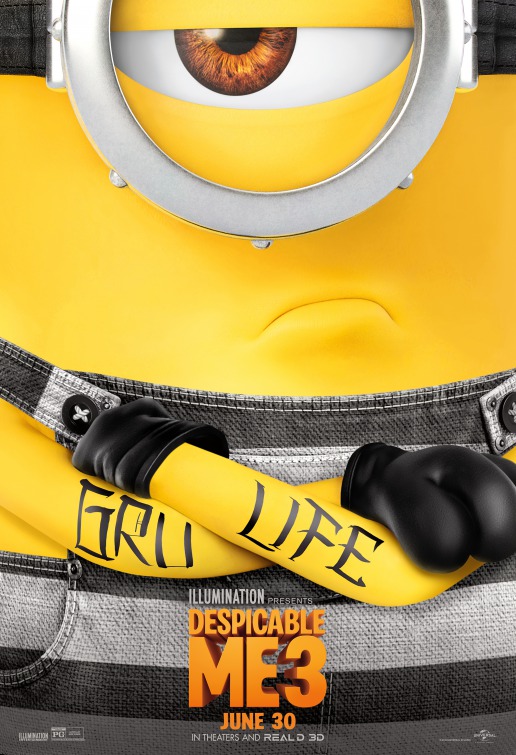 How to entertain children and adults at the same time.

As a kid of the eighties, Despicable Me 3 managed to remind me of how completely stupid was that entire decade. Stupid clothes, stupid trends, stupid catch phrases, and some really, really stupid music. Despicable Me 3 put those things back in the spotlight, simultaneously using them to propel a fun movie while ridiculing them at the same time. It was mah-velous. Get it? Anyone? Is this mic on?

(To be fair, this movie also featured some of the good music from the eighties, including Smooth Criminal by Michael Jackson and Money for Nothing by the Dire Straits.)

Not only did I thoroughly enjoy the movie; my kid loved it. I know this because, unlike during Cars 3, he didn’t ask if we could go home. He was laughing and eating Skittles and laughing some more. And he got both of us ready to see this film by insisting we watch the other three movies in the franchise over and over and over (and over) and he never got saturated. But don’t take my word for it, take it from him.

How the audience received the movie, regardless of age.

Was Despicable Me 3 better or worse than Cars 3?

Was Despicable Me 3 funnier than Cars 3?

Why was it better and funnier?

Because of the minions.

Who is your favorite minion?

Which one is Bob?

He’s not a really tall one. He can be one with one or eye or really small.

But what about Bob?

That’s what I said. I like Kevin because you’re Kevin.

What was your favorite character that wasn’t a minion?

What is Gru’s brother’s name?

It’s Dru. They rhyme because they look the same.

Why does Dru wear white?

Because Gru wanted the black one.

The bubble gum guy? I don’t know what his name is.

Why is he the bubble gum guy?

Because he’s mean and he likes the bubble gum. He likes chewing bubble gum.

Does he use the bubble gum for anything?

Did you know all the stuff about him was from the 1980s?

The way he dressed and the toys and the songs were all the 1980s.

Why didn’t anyone just pop the bubbles he used to make things fly away?

Do you think Gru’s daughters are funny? Do you like his daughters?

I liked when Agnes made Gru soup and it was gross.

What was your favorite song in the movie?

The rock and roll gun.

Was that the Dire Straits song? Money for Nothing?

Yes. The one you played for me that goes BRRRRMRRRRMRRRR. And it rock and rolls all the people’s clothes off.

Would you tell other people that they should go see Despicable Me 3?

Because it will be funny.

How many times do you want to watch the movie?

Rating: They should pay the whole money because the minions made an airplane and the seats out of toilets.