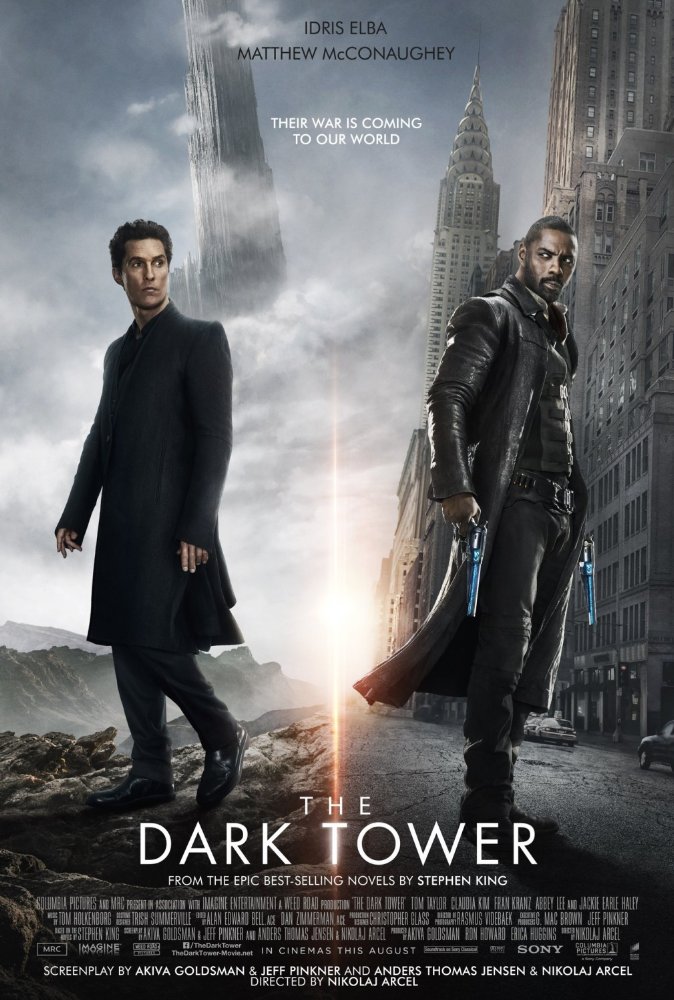 Adapt at your own risk.

Let’s just get this out of the way right now. If you are a fan of Stephen King’s The Dark Tower series, at the very least, you are probably going to be disappointed in the movie The Dark Tower. At the very most, you’re going to be pissed off for days, cursing Sony (the production company) and willing The Man in Black to pay visits to the director (Nikolaj Arcel) and writers (Akiva Goldsman, Jeff Pinkner, Anders Thomas Jensen, and Arcel). And I would not blame you for hating this movie. When compared to the books, it’s a travesty, especially since you (and I) have been waiting for a film adaptation for decades. To say this movie is loosely based on the books is to abuse the word loosely. I’m sure, at this very moment, my writing colleague is tearing this movie a new ass hole in his review. But I’m not going to do that because I expected this would happen.

The Dark Tower literary series is a massive, sprawling epic covering eight whole books and tying into dozens more books. There is no chance in hell a 95-minute movie (I still can’t believe that length) could do any kind of justice to even a portion of a single Dark Tower novel, let alone the entire series. The first clue was in the title of this movie. The first novel is titled The Gunslinger, which means Sony had no intention of this film being anything more than a placation of clamoring fans. They figured they’d grab the iconic characters from the first book, include a bunch of things from throughout the series, toss in a bunch of additional Easter eggs for Stephen King fans, and call it a day. The strange thing is it turned out to be enough to placate me.

Just one of many placations.

(SPOILER ALERT. For the movie, not the books.)

Supposedly, production on a TV series is slated to begin in 2018, and if true, is the only good way to handle adapting the series. Like with Game of Thrones and Outlander, the only way to do the books justice is in super-long form television. That allows the show-runners to focus on all aspects of the writing rather than forcing them to cram things into what amounts to a two-part episode. Knowing that, it’s hard to get worked up over the latest example of Hollywood failing at adapting a beloved book. From a purely cinematic standpoint, The Dark Tower is an adequate movie.

Maybe I’m cutting the movie too much slack, but there isn’t anything in the film that is bad. In all honesty, they captured the plot of the entire series fairly well. All of the universes are protected and held together by a Dark Tower. Walter, a.k.a. The Man in Black (Matthew McConaughey), wants to destroy the Dark Tower so that the Crimson King can rule all. Roland Deschain, a.k.a. The Gunslinger (Idris Elba), wants to avenge the death of his father by killing Walter. Eventually, Roland accepts that the Dark Tower is more important than his vengeance. That’s all captured in this movie and, all things considered, is…well…adequate.

I did mention the film features all of the major characters from The Gunslinger and that includes young Jake Chambers (Tom Taylor). Jake has psychic powers and Walter is hunting and capturing kids with those powers in order to assault the Dark Tower. This being a standard Hollywood action flick, Jake’s power is far beyond any other kid’s and Walter believes Jake is the key to finally bringing down the Tower. In another creative decision sure to piss off fans, Jake is this movie’s protagonist. That’s right, get all your cursing out now, I’ll wait. After some really quick character development, Jake ends up crossing through a portal into Roland’s world and the two of them journey together to stop Walter. It’s really that straight-forward of a movie, complete with the by-the-numbers hero’s journey. Again, adequate.

The slack I’m cutting is mainly for three reasons. One – the casting was very good. Idris Elba nails Roland and Tom Taylor is Jake to a tee. The two of them carry this movie and, despite the short running time, create decently fleshed-out characters. McConaughey is also good, but he didn’t quite make it all the way to menacing. Oh, he looks the part and comes close, but his Walter comes off a little flat. Making up for it, the folks playing Walter’s henchmen (the Low Men) really look the part, especially Abbey Lee Kershaw and Jackie Earle Haley, both playing Walter’s lieutenants. 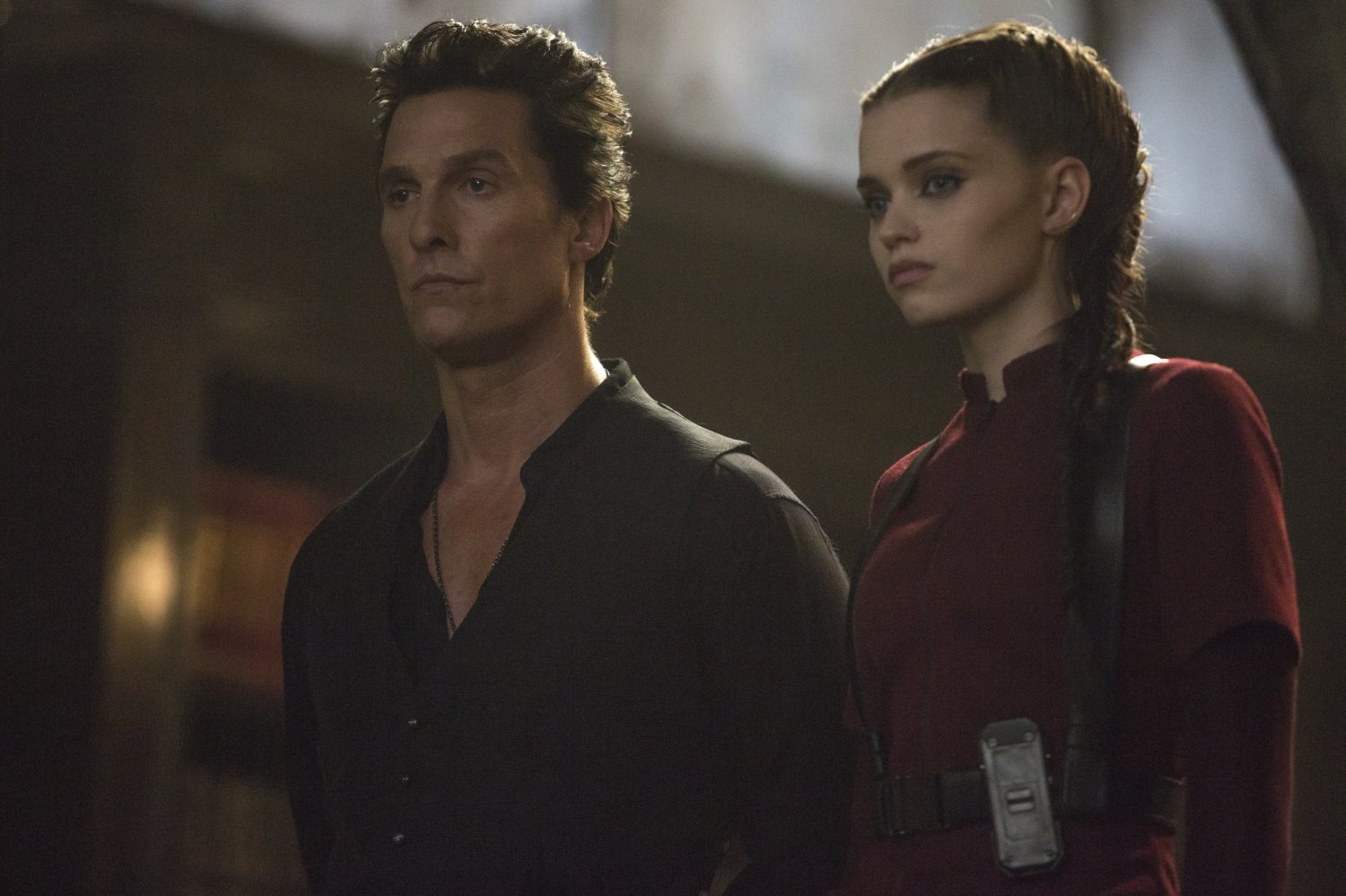 They definitely look the parts.

Two – the way Roland interacts with his guns really sells how skilled he is. There are several different ways in which he can reload his revolvers and his marksmanship skills are second to none. Granted, the movie goes fairly stupid in also giving Roland super-powers (fast healing, enhanced strength, impervious to falling from tall heights). This feels like studio meddling, but Akiva Goldsman’s writing and producing credits indicates he might just be that bad a writer.

Third, and definitely the nerdiest, are those Easter eggs I mentioned earlier. I realize how manipulative those moves are in tricking fans into a more favorable view of the movie, but I’m owning it. The number 19, a low-rider Cadillac toy, a shout out to Pennywise, the Shine, a spider, 1408, roses, and probably others that I missed all had me grinning like an idiot.

The way I felt at the end of this film reminds me of how I felt after watching Ender’s Game. It’s missing a whole lot of what made the book such an incredible read, but at least they didn’t completely fuck it up. Yes, the big emotional moment from the book with Jake was missing from the film, but I saw the previews and I knew this movie was really only a token gesture at bringing King’s opus magnus to screen. It’s enough for me that Roland was written and portrayed well, that Walter was at least a formidable foe for Roland (despite the silly action movie ending), and that a bunch of fan nuggets were thrown in. I know I’m being much kinder to this movie than for many other movies, but, like I said, I’m owning my placation.

Rating: Unless you are in the outraged group of fans, ask for two dollars back.