They say if you love what you do, you will never work a day in your life. Well, truth be told I do love gambling on football and writing about it. I have to level with you though. Making a bunch of jokes after a week that saw Hurricane Harvey decimate Houston, a two-time Olympian nurse (!) get cuffed and stuffed for protecting patient confidentiality, Twitter being used to escalate nuclear tensions, and the rollback of DACA sort of feels like work!

My emotions are all over the place. If I’m inside I like a good storm, though not as much as some of you apparently do. Lord knows I have had my battles with ER nurses, especially those who rely on something called urine toxicity instead of my assurances that a then-17-year-old kid could go flying out of a third-story window without imbibing any illegal substances beforehand. For Christs sake, I’ve been saying complimentary things about J.J. Watt all week! Something is clearly amiss.

I think the worst thing about this DACA thing is that whats-his-face doesn’t even know what it is. This seems ludicrous to the outside world, but remember that he also believes that the Gerber Life Grow-Up Plan is health insurance. I promise I wont beat this to death, but if you support this crap, you are on the wrong side of history. More importantly for the subject at hand, you are on the wrong side of football. As of press time there are 57 active foreign-born NFL players. Football, like all sports, is ultimately a meritocracy regardless of how you feel about the culture that fosters professional careers.

When I was a kid, it seemed like every game-winning field goal was kicked by one of two Norwegians, an Irishman, or a Michigander of Iranian descent. So long as the kick was good, it did not matter the nationality of the man behind the comically tiny face-mask. Hell, Knute Rockne, All American was an immigrant! Look, maybe we are a melting pot, maybe we are a mosaic, maybe the entire universe is crud under an aliens fingernail. Whatever we are, we are better than this. HEY LOOK FOOTBALL!

Look, the real answer here is pass. The nine point line is just about right as far as I can see, and the O/U opened at 50 before settling at 48.5, pretty much exactly where it should be to get every mark to put their money on the table. But lets be honest: this is the first real game of the season, broadcast on NBC, and everyone and their mother will be watching. The smaller, non-NFL affiliated cable sports networks (*monster truck voice* Triple ZZZ Sports on channel 1761: your home for midweek Ivy! League! Football! – SCRATCH YOUR WEDNESDAY NIGHT IIIIIITCH!) are not even bothering to counter program with degen college games. Those don’t start until September 21, when Temple and South Florida give us a sneak peek at this years NCAA title game.

So I get it. We are all going to stop arguing about the propriety of confederate memorials and whether police officers are allowed to deploy overt irony during a traffic stop long enough to watch this game. Ergo, some of us are all but required to bet on this thing, lest we be mistaken for the type of psychopath that roots for Tom Brady or against a do-it-all throwback like Reggie Ragland, without a reason. The thing is, with such a close spread I think the smartest play is a small to moderate bet on the under.

The Chiefs allowed an average of 19 points in the regular season last year. As for the Pats, Trey Flowers was starting to emerge as a star last year, and Arkansas rookie Deatrich Wise was apparently good enough during camp to beat out Kony Ealy for the other DE job. But hey, I’m sure you’ll enjoy the Jets, Bro. Granted, we are talking about Alex Smith and Tom Brady here, who went 12-4 and 14-2 respectively last year, but even great offenses don’t usually sprint out of the gate during the first game of the season. Not to be condescending, because I’ll probably do it to, but if you must bet this game, put a small amount on the under.

Well this line has certainly been interesting. This game opened at Dallas -6 and the line has dipped, plateaued, and recovered in the time since, dipping as low as three at some books before hooking back up, seemingly because of the trials and tribulations of Ezekiel Elliott. If you have somehow managed to avoid the soap opera, here goes. After the league announced a six-game suspension in August, Elliott appealed like everyone knew he would. Then it came out that the lead investigator had recommended that he not be suspended, and that said investigators recommendation was missing from the final report that the NFL submitted to the appeals officer. Elliott and the Players Union immediately sought a temporary restraining order from a District Court in Plano, and I’m guessing Jerry loaned Zeke his jet despite the short 36 mile trip. Come Tuesday night, surprise surprise, the appeals officer upheld the entire six-game suspension.

The most recent curve-ball came on Wednesday, when the league took the position that Elliott can play Sunday, and as of press time the forthcoming ruling on the TRO would affect games two through seven. This led to the hilarious situation wherein Steve Marriuchi, Reggie Wayne, Kurt Warner, and Michael Irvin – a brain-trust I would score somewhere in between can order a pizza and can put together a lego Millenium Falcon – breaking down District Court injunction procedures on the NFL Network.

While his MMA skills remain something of a mystery, Ezekiel Elliott is a phenomenal football player. But you can’t tell me that this whole thing isn’t a huge distraction. Its also worth noting that a full-strength, undistracted Dallas won eleven straight last year. Book ended by losses to the Giants both times they played. Rayne Dakota Prescott averaged over eight yards per attempt last year, against everyone but the Giants, who cut that in half. The Giants also shut down Elliott last year, limiting him to 3.6 yards per carry. I know Odell Beckham is a question mark, and that he makes a world of difference to the Giants chances this year, but as we’ve discussed before, Brandon Marshall serves as a convenient valve for Eli. The Giants defense makes the difference here. They’ve covered the last five times and I feel safe in saying that they will do so again on Sunday night.

This has nothing to do with anything, but did you know that the Falcons starting center is named Alex Mack? Given the skew of the age of most current NFL players, how many times do you suppose that he has been asked about his secret world? I bet he is the one guy in the league just hoping and praying that his team drafts backup Air Force RB Timothy McVey.

If you are a big believer in revenge games, or motivation by defeat, I don’t need to spend a lot of time explaining why some people expect Atlanta to come out firing on all cylinders. It was one of the most crushing defeats in Super Bowl history and it had to sting. That said, one of the guys who would have been the most motivated is long gone. Offensive coordinator Kyle Shanahan took the head coaching gig in San Francisco. Steve Sarkisian beat out Chip Kelly to replace him, after a long, bizarre journey involving Nick Saban and a 30 million dollar lawsuit, primarily because, near as I can tell, he said fucking at a pep rally. Alcoholism redemption stories do not usually involve wrongful termination lawsuits, and from the outside it all looks like a tempest in a teapot, especially when you remember that USC brass are prone to dramatic snap-judgment firings.

Sarkasian inherits an offense that carried Atlanta to 13-2-1, replete with weapons including Matt Ryan, Devonta Freeman, and the seemingly ageless Julio Jones. I obviously can’t sing the praises of a defense that blew a 28-3 Super Bowl lead, but it wasn’t Atlanta’s defense that took them to the dance in the first place. Conversely, the Bears went 8-8 last year and traded up in the draft to nab North Carolina QB Mitchell Trubisky. Positive, glass-half-full types like me might say that this is thinking outside of the box. However, actual league executives definitely said we don’t know what the hell they were doing and that draft just got a lot of people fired only they don’t know it yet.” So, you know lets go with mixed reviews. And bet all of the money we have on Atlanta.

Until Goat stumbles upon that mythical creature who both knows how to share Google docs and knows what they’re talking about, I am a professional football joke-maker. When I go to the professional football joke-makers meeting, we all praise the high heavens for delivering unto us Mark Davis. He just makes it so easy. The hair. The 1997 bubble-top van. The clothes. For Gods sake the man is worth 500 million dollars and he hangs out a P.F. Changs, literally every day. But truth be told when ESPN did that great longform piece a few years back, it made me feel a little guilty. The man obviously had a weird, complicated relationship with a domineering father, and one can sort of sense that a lot of those little eccentricities are holdovers from a sheltered, Buster Bluth-type existence.

Sheldon Adelson, however, is an evil bastard who deserves no such sympathy. It is for that reason that I sort of admire Davis for putting the screws to Adelson with respect to the Las Vegas stadium deal. Mind you, the public financing of stadiums is a total con, and the people who live and work in Clark County (like one of my bosses) were absolutely robbed blind, but I do love the fact that Adelson has to walk around knowing he got worked by of all people Mark Davis, a man whose prior sole un-inherited accomplishment was inventing that quarterback-jersey-handwarmer dealie. 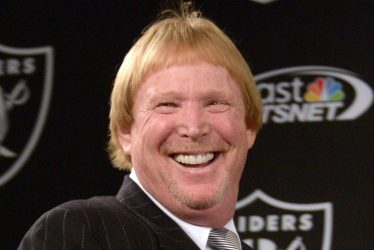 Personally, I’m a little surprised that Tennessee is the favorite here. You can chalk it up to two ascending programs and one having the home field advantage, but the Derek Carr version of the Raiders has traveled to Nashville twice. And beaten the Titans twice. The Raiders are a hell of a lot of fun to watch, and their new OC promised to maintain the offense that saw Carr whip the ball around the field like an Arena League QB on a eight-ball binge.

The argument for Tennessee is Mike Mularkey’s exotic smash mouth offense coupled with healthy, hungry versions of Marcus Mariota, DeMarco Murray, and Derrick Henry. But I’m not quite sold on Mariota yet. As the people who actually play the game say, he’s soft, and if he gets hurt again that might get upgraded to the dreaded injury prone. He played his worst game last year against the Raiders, completing 51% with three turnovers. I could be wrong, he could be coming into his own or whatever, but I highly doubt hes going to make a statement after being reacquainted with Khalil Mack on Sunday. Raiders and the points.

That’s it, gang. This world, she shakes from time to time but at least we have real football again! Be decent to one another. Send some money to Houston if you can. And lets see if we can’t win it all back by Tuesday morning.