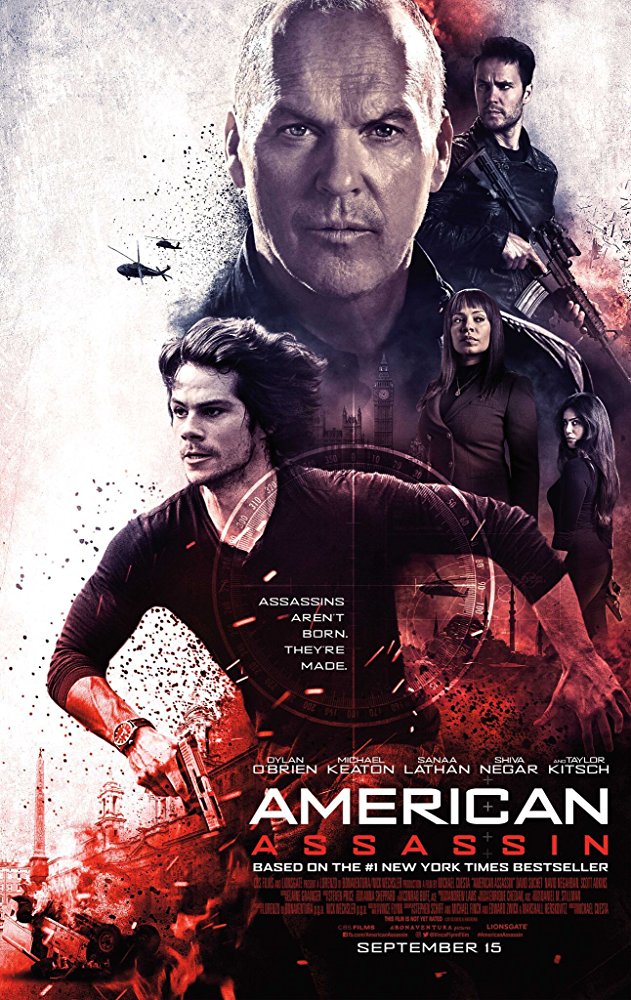 Based on the novels of Vince Flynn, a young CIA operative must help thwart a plot to detonate a nuclear bomb.

Long live the 80’s. When the climax of American Assassin completed, I immediately knew I would be writing a review in Ruthless Review’s 80’s Action Movie format. American Assassin checks off all the boxes and even reminds us of other standard components – the training montage, bomb timers, and crazy Michael Keaton, among others. Unfortunately, I can’t do the format true justice because I wasn’t prepared for it going into the film. Specific things like post-mortem one-liners and corpse count require taking notes and I do not take notes at screenings because I don’t want to be that really annoying guy with the light-up pen. I’ll do my best, and I promise when American Assassin is released on DVD, I will revisit this review.

Revenge is a dish best-served nuked.

Much more subtle than an 80’s action flick, but you can see it if you squint. There are two gorgeous women in the film who are given very little to do and are killed to provide motivation for the hero, Mitch Rapp (Dylan O’Brien). The first is Katrina (Charlotte Vega), Rapp’s girlfriend, who is on the screen just long enough to be seen in a bikini while accepting Rapp’s marriage proposal, then shot in the heart by terrorists. Love between a man and a woman is literally killed in this film. The second woman is Annika (Shiva Negar), whose job within special agent Stan Hurley’s (Keaton) black ops team is to be hot. To be fair, she does get to kill a couple people, but the moment she shows tenderness toward Rapp, Rapp suspects her of being a double agent and nearly drowns her in a bathtub to get a confession out of her. She’ll shoots herself in the face for no reason other than to clear a path for Rapp and Ghost to get it on. Finally, Rapp has two signature fight moves – grabbing another man’s knife blade when it’s thrust at him and wrapping his legs around his male opponent’s head. Like I said, you have to squint a bit.

If anything, this movie isn’t interested in sexual innuendo at all, but does have all kinds of daddy issues. Stan Hurley is the surrogate father to a bunch of CIA, special operations soldiers that he personally tortures/trains at his secluded cabin in the woods. The rogue agent/villain’s, Ghost (Taylor Kitsch), entire plan is a revenge plot for Hurley abandoning Ghost on a previous mission. Even the deputy CIA director, Irene Kennedy (Sanaa Lathan), can’t have a conversation with Stan without mentioning her dead father. Annika is working for her uncle, Kennedy is trying to impress her much older, male boss, and Rapp is trying to prove to Hurley and Kennedy he can get the job done. There’s really no time for homoeroticism when everyone is trying to make a father figure proud.

So pretty. So dead.

Dozens of tourists are murdered on a beach right at the start of the film, punctuated by Katrina’s death. Counting deaths in that scene would be difficult, as would the scene shortly following that in which a bunch of terrorists, including Rapp’s revenge target, are killed by special ops while Rapp is tied up in a chair. We know how many are in the room, but not how many are in the facility. The rest of the movie is filled with on-screen deaths that are somewhat sporadic and easily counted. I estimate Rapp’s body count at 8-12 and Ghost’s the same. In the spirit of J.J.’s NFL gambling pieces, let’s set the over/under for confirmable deaths in the film at 45 and remind Kevin that light is not needed to make tick marks on paper in the dark.

Rapp remembers one of Hurley’s training lessons and pushes a knife through that little soft spot in a bad guy’s throat. The terrorist Rapp is obsessed with killing experiences a death that’s more surprising than novel, but definitely memorable. But I’m going with Annika putting a knife through a guy’s foot, slamming her hand back onto that knife after taking a couple punches, and ending the dude. It’s not all that novel, but she owns it.

Was There a Stupid Chief?

Kennedy has a hunch that Rapp is “the one,” refusing to listen to Hurley on multiple occasions that Rapp isn’t ready. But when has that ever stopped the stupid chief? “I want him on this mission,” she barks at Hurley and Rapp almost immediately vindicates Hurley’s warning, disobeying orders. Kennedy is all bark and no bite, hurling F-bombs when she wants to be taken seriously, and reminding Hurley “that’s an order.” Hurley is running the show and getting things done, but everyone has a stupid chief they answer to. 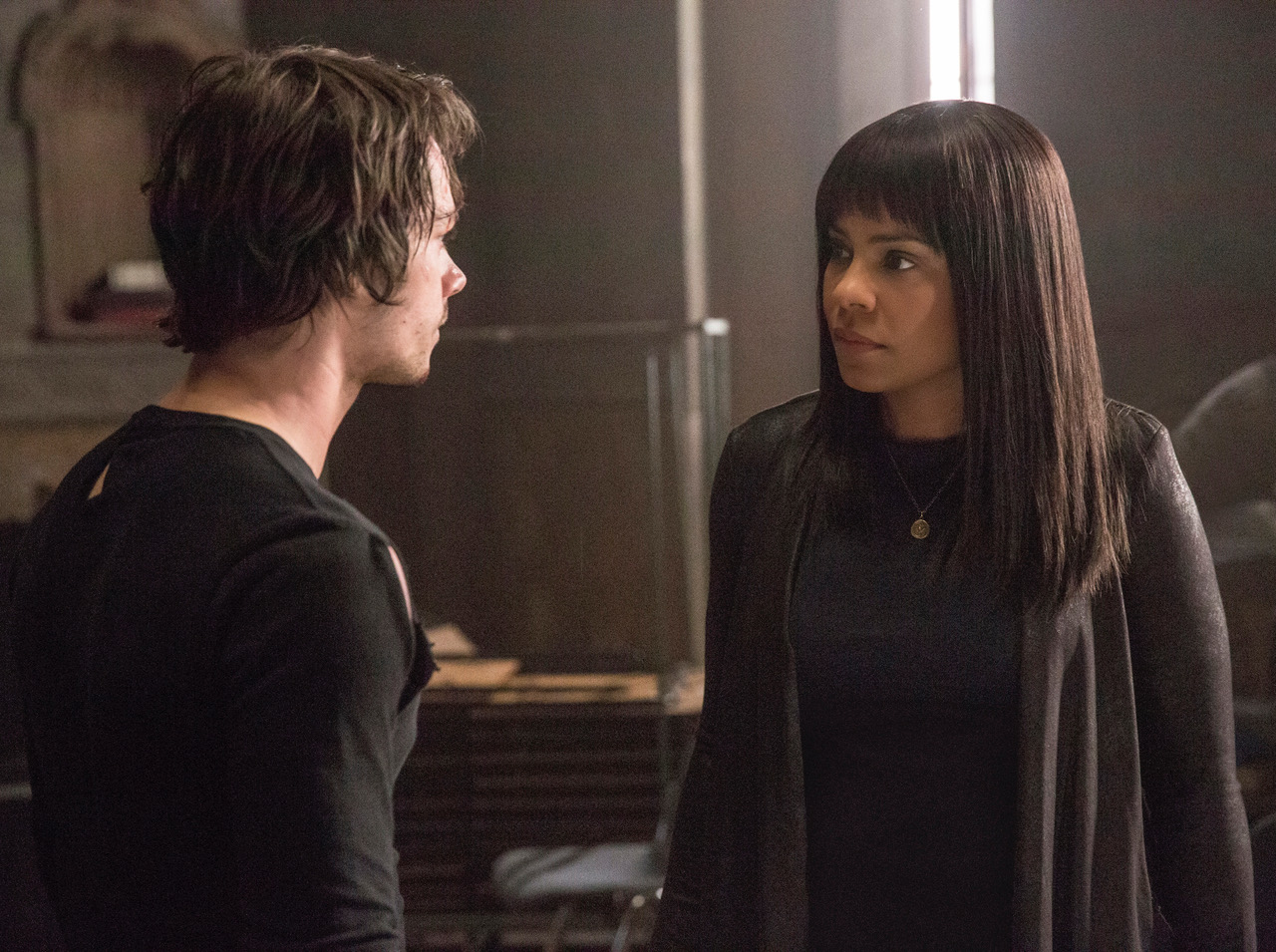 Does screaming at a guy, as Annika does, count? You’re right – no. There aren’t any post-mortem one liners and, if there are, they weren’t worth repeating. However, Hurley does grace us with a good line right after biting Ghost’s ear off, “Three – never get too close.” This is preceded by Keaton reminding us how well he does crazy. Think about every scene where someone bites a chunk off someone else and immediately spits it out. Bruce McClane biting part of Colonel Stewart’s cheek off in Die Hard 2 comes to mind. Conversely, Hurley stares with the look of a lunatic in his eyes at a wounded Ghost while happily continuing to chomp on Ghost’s severed cartilage. “You want to get nuts?! Let’s get nuts!”

Hurley had a few, including some tips for Ghost as Ghost is torturing him. But I’ll be damned if I can remember them well enough to quote. How about we call this one TBD and move on after I give you the one (really dumb) quote I remember. 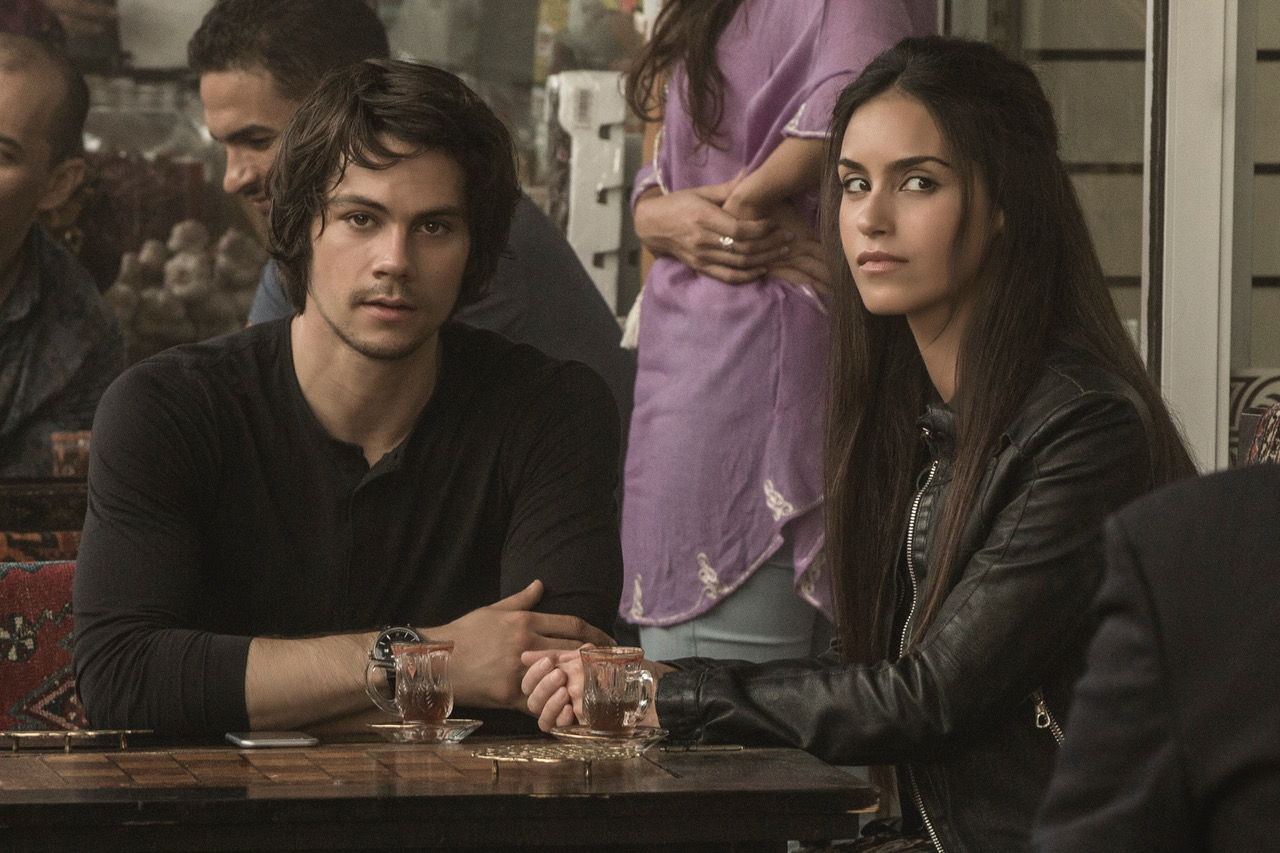 I don’t have more quotes, so here’s a picture of two gorgeous spies trying to fit in.

In case you were in a coma during the last two years, one of the 80’s most loathsome, yet popular, people is now the President of the United States. Right now, the United States is its own 80’s action film, complete with a madman threatening nuclear war. Among other things, he and his party desperately want you to believe the Iran nuclear deal is the worst decision since Captain Smith lit the last two boilers. American Assassin posits the idea that the nuclear deal forced Iranian hardliners to pursue secret nuclear weapons, sprinkling in that they obtained weapons grade material from the Russians. As is standard procedure for the modern Republican party, facts are for hippie, socialist liberals and stories concocted from thin air by plutocrats are for “real” Americans. Ignore the fact that the Iranians have kept their word and U.N. weapons inspectors have verified that fact. Those non-Christian, non-white fuckers want you dead and only a reality TV host and secret agents with PTSD, serious daddy issues, and an unlimited budget can save you.

Was There an Atomic Blast at the End?

Somewhere off the coast of Italy, a lot of marine life has been extinguished or irradiated. Ghost wants to detonate a homemade nuclear weapon in the middle of the U.S. Sixth Naval Fleet, but can’t beat Rapp with only one good ear. Luckily, Ghost set a timer that doesn’t have a blue or a red wire, so the next best option is for Rapp to get it as far as possible from the fleet before it detonates. Rapp hurls the bomb into the ocean with two minutes left on the clock and we are treated to an underwater nuclear explosion. A giant water sinkhole appears, followed by a wet mushroom cloud, blast wave, and tsunami. Clearly, a lot of time was spent on rendering this scene and explains why no time was devoted to novelty deaths. 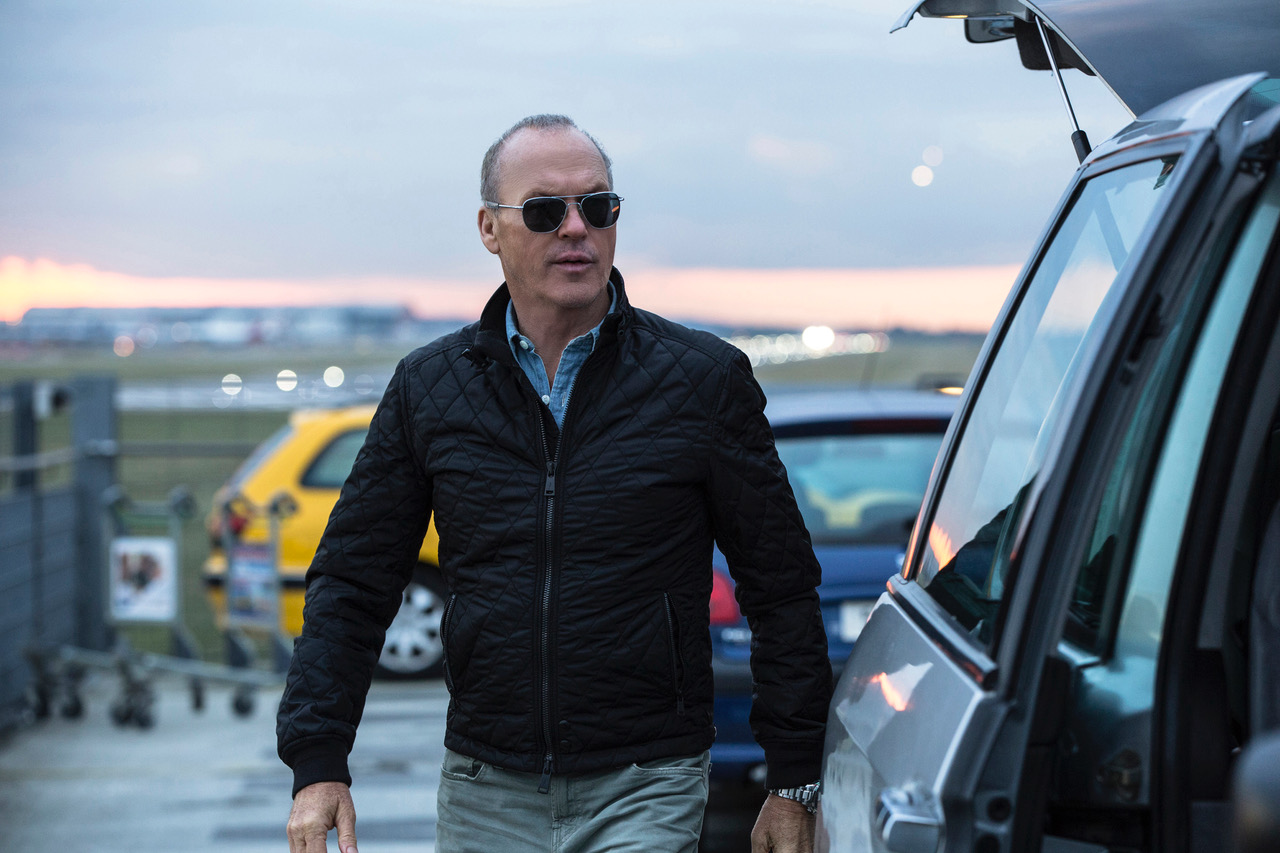 I was into this movie for the majority of the film. Keaton is fantastic, the fight scenes are good, the story flows really well until close to the end, and Rapp and Hurley are good characters. The film lost me when Annika was revealed to be an Iranian agent planted on Hurley’s team, then revealed to be working toward the same goal of thwarting the hardliners. If she had the same mission as Hurley’s team, why not just work together openly from the start? Oh, right – see Stupid Political Content above. The effects of the nuclear explosion on the ships of the fleet were pretty bad too, defying physics in more than one way.

Special Ruthless Ratings or- What I Learned From American Assassin:

Rating: Ask for two dollars back and remember to bring a pen and paper, just in case.