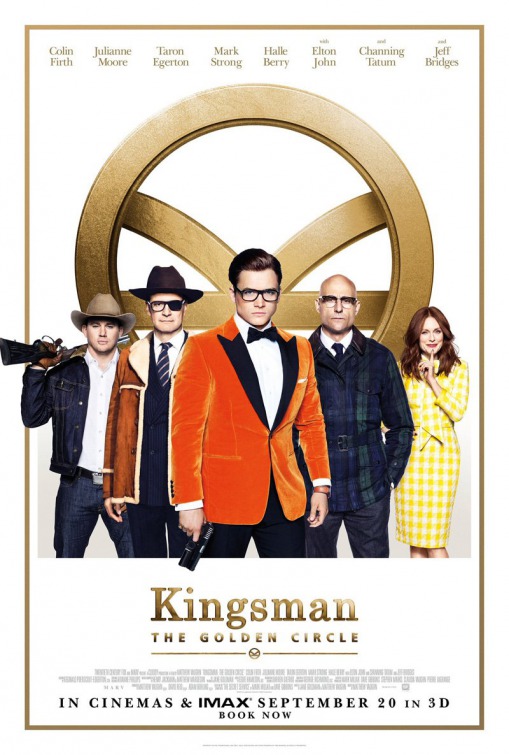 The hell if I know, but Elton John does a flying kick.

It sucked, but not because it’s a sequel.

Just before the movie It released and shattered box office records, a bunch of Chicken Littles wrote a bunch of articles bemoaning the poor summer box office returns, reheating a classic groupthink explanation for those poor returns. Variety provided a great example of this intellectual emptiness, stating “Yes, all the aforementioned titles are reboots or part of a major franchise. Yes, that’s precisely what summer ticket sales indicate audiences are tired of.” Really? That must mean the highest-grossing movies of the year aren’t reboots, sequels, or franchise entries. Strange, that list isn’t mentioned or referenced in the article, so we’ll have to go somewhere else and look and, oh…

Huh. Not one of those movies is even remotely new material. But, surely those movies at least have lower grosses than the top films from last year. Checkiiiinnnnggg, nope, pretty much the same numbers and the top two movies this year eclipsed the top two from last year (which were also not original). Oh, wow, we still have Blade Runner 2049, Thor: Ragnarok, Justice League, Star Wars VIII, and Pitch Perfect 3 left this year?

After reading several more piles of similar drivel, I starting writing up a rant in my head to counter them, but came across a piece in The Atlantic that seemingly stole the rant right out of my brain. Without reciting the entire article, the author makes very good points about how nobody complains about television shows being recycled. I’d like to take that argument down some parallel roads. Nobody ever had a good first date, then turned down a second date because it featured the same people. Nobody ever ate a good slice of pizza and turned down a second slice because it was made with the same ingredients. Nobody ever watched a sporting event and vowed never to watch another game from the sport again because now they know what to expect. Nobody ever had sex and turned down a second romp because been there, done that. I’d bet my house that if you haven’t expressed that very same “Hollywood is just reboots and sequels” cliche, you’ve heard at least seventeen other people say it. And every single time it sounds just as vapid. 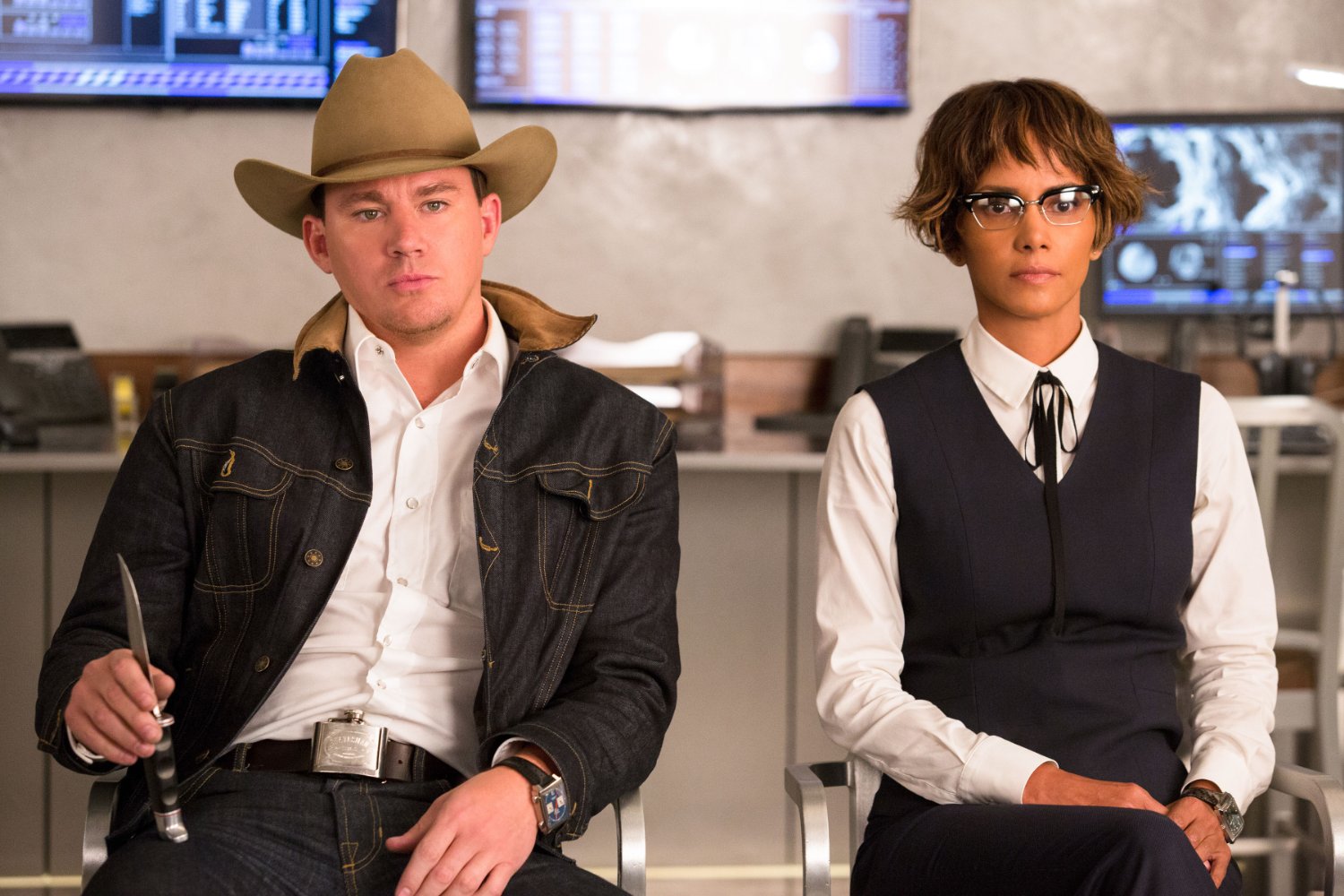 Two people nobody wanted to see in this film.

With all that in mind, wow, did Kingsman: The Golden Circle sequel suck. The first movie received well-deserved accolades and reviews and the sequel takes all of that goodwill and wipes its ass with it. Movies like this are one of the reasons why the aforementioned cliche won’t die. But it didn’t suck because it was a sequel. It sucked because it was a poorly written and lazy movie. What it did do that a lot of other crappy sequels have done is completely fail to understand what made the original so likeable. After watching the original, you almost undoubtedly reminisced about the church scene, the bar fight scene, the chick with the sword legs, or everyone’s head exploding into a shower of fireworks. It was the perfect blend of insanity, political commentary, comedy, and action. The Golden Circle is none of those things, barely even trying to be at times.

The best way to describe the components of The Golden Circle is watered down. As stupid as Samuel L. Jackson’s lisp was in the first film, he was at least a great villain in all other respects. This time, we have Poppy Adams, a bland villain phoned in by Julianne Moore with no interesting or memorable characteristics. Poppy is the head of a drug cartel that makes $250 billion per year and makes her headquarters in some Cambodian ruins partially made over to look like a 1950s era main street. Hilarious, right? Also, she is stupid. I don’t mean just the character in general, but she’s actually written to come off as really stupid. Early on, she blathers about how humans can’t be trusted and we meet her robot dogs, robot hair stylist, and…no other robots. $250 billion a year can buy a lot of robots, so why does she still have so many humans working for her? This contradiction is punctuated when she forces a henchman to feed another henchman into a meat grinder. And her evil plot? She has laced all of her drugs with a poison that gives people blue veiny rashes, causes them to dance, paralyzes them, then kills them and told the leaders of the world that she will release the antidote once they legalize all drugs. Her stated motivation is to be a legitimate businesswoman so she can move out of Cambodia. Think about that for a second. If her cartel was a country, it would have the 45th highest GDP in the world, but she decided to risk it all by stealing the Joker’s plot from Batman so people would like her. I never thought I’d miss the lisp.

We’re laughing because we can’t figure out how you won an Oscar.

Then there are the characters. Remember all the ones you liked from the first movie? Well, too bad, all of them are quickly and unceremoniously killed in the first half hour except Eggsy (Taron Egerton) and Merlin (Mark Strong). I’m not counting Princess Tilde (Hannah Alstrom) because I honestly do not remember her in the first movie. At all. Not even a little bit. Also, Colin Firth is brought back to life by a magic, rubber head wrap because science (he was shot through the eye and brain in the first film and was definitely dead). Or director/writer Matthew Vaughn loves soap operas. Either way, it was a poor writing decision (and I like Colin Firth). All of the dead are replaced with cardboard cutouts played by a couple of Oscar winners (Halle Berry, Jeff Bridges, and Elton John), Channing Tatum, and that guy who played the Red Viper in Game of Thrones (Pedro Pascal). What’s that? I made up the Elton John part? I most certainly did not. I’ll have you know he delivered the best performance of the film…and that’s really sad.

(Note: All kidding aside, Sir Elton really did outperform everyone else in this movie, maybe because he was the only who realized how truly insipid the screenplay was and really had fun with it.)

The common thread is that the writing is what you’d expect from a ten-year-old second grader. Go ahead and do the math; I’ll wait. Throughout the bloated 141-minute running time, bad dialogue competes with stupid code names which fight with pointless actions that are stomped on by humorless jokes, all of which don’t look so bad next to the mind-numbing science/gadgets and soulless love story. Want some examples?

Want to see my whip?

It’s important to know that I didn’t hate this movie. In fact, there are very few movies I’ve hated. Hating a movie and criticizing a movie for being garbage are two different things. My friend said he was at least kind of entertained and I can respect that. I’ve been plenty entertained by terrible movies, too. Unlike during my screening of American Assassin, I took some notes (no light pen required) to capture corpse count (102, not counting the robots) and novelty deaths (shoved in a meat grinder, impaled by a ten-foot tall scissors, cut in half by Whiskey’s magic lasso) because those things tend to make purposely absurd movies more fun. I also jotted down some quotes, one of which sums up this movie nicely: “That’s the first decent shit I’ve had in three weeks.” I couldn’t agree more.

Rating: Ask for all of your money back and stop saying you hate sequels. You don’t hate sequels; you just hate bad movies.