Home / Featured Posts / NFL Week 6: The Oppression Is Only In Your Mind Edition

NFL Week 6: The Oppression Is Only In Your Mind Edition

NFL Week 6: The Oppression Is Only In Your Mind Edition

This just in: Mike Ditka sucks. Mike Ditka not only sucks, Mike Ditka is an archetype of suck. Mike Ditka is a caricature of a sort of outdated, humorless hard-ass father figure exclusively in the eyes of people who hate their fathers. He was, indisputably, a game changer when playing for the Bears, Eagles, and Cowboys as a tight end. He didn’t necessarily reinvent the position, as TE’s were always eligible receivers, but he was the leading receiver on his team in 1961. That arguably led to an evolution of the position through Kellen Winslow, to Tony Gonzalez to Rob Gronkowski. 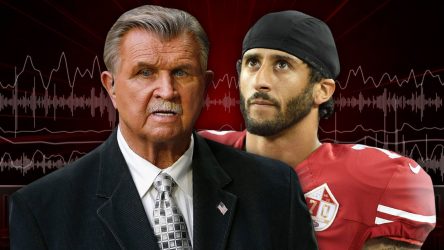 The coaching is a bit more of a question mark. For all of the accolades now directed back to the 1985 Bears, they only won one Super Bowl despite the presence of Walter Payton and Willie Gault. Time has also shown that the core of that team was Buddy Ryans 4-6 defense, as they allowed – seriously – 12 points per game. Then of course come the personnel decisions. Starting Doug Flutie, who had been on the team for a few weeks, in a playoff game. Leading the Saints to 15-33 before trading his entire draft to pick Ricky Williams in 1999 after coyly announcing at the owners meeting that he would trade [his] entire draft for Ricky Williams in order to keep opponents guessing. I would keep going but ex-players keep burying him during 30 for 30 shoots so I don’t have to.

The constant needling of Jim McMahon was always a puzzlement, too. Obviously, haranguing a guy with a severed cornea for wearing sunglasses all of the time is Monte Burns versus Don Mattingly ridiculous. And Jim McMahon showing up with the commissioners name written on his headband seems so quaint now, doesn’t it? If the guy who mows my yard wore a DUQUESNE SUCKS hat and effectively did the whole job for an agreed-upon price, I’d let him paint it on the mower to match. Full disclosure: I don’t have a guy who mows may yard. Or a mower. Or, as it happens, a yard. 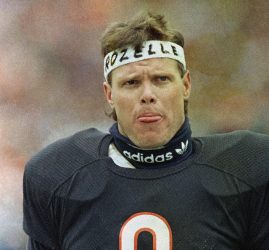 So, of course, this man who sucks becomes the latest walking talking stereotype to throw his hat into the Black people should “shut the fuck up” ring. There has been no oppression in the last 100 years that [he] know[s] of and, just to spike the suck ball in the suck end zone, protesting players should “go to another country and play football.” This is obviously shooting deer in cages, but what the hell: Mike Ditka was born in 1939. White primaries, which are exactly what you think they are, were not declared unconstitutional until Terry v. Adams in 1953. Brown v. Board of Education eradicated segregated public schooling in 1954. The March on Washington for Jobs and Freedom took place in 1963. The Selma to Montgomery marches happened in 1965. COINTELPRO ended in 1972. You get the idea.

So when you read that the leader of the free world saw a downward-trending graph and, with neither context nor hesitation, pointed to the apex and commanded that said point be his ideal, and you say who in the hell supports this fucking moron? now you know. When you’re perplexed by acquiescence as we are scuttled toward fascism and you dare ask what sort of intelligent, free-thinking person would go along with this nonsense, now you know. If you’re in Hays, Kansas and your teeth have been metaphorically kicked out and you’re filling out car wash applications to stave off an opiate addiction that looks like a better and better alternative everyday because at least then all of your problems would become one, now you know.

There is, you see, a teeming mass of mean-spirited, moneyed individuals who do not care one bit. They know he’s a fucking moron (back off, Mom; the Secretary of State said it first!) but that just sets the table, for it confirms his controllability that much more. Better him than you, or me, or that Black state senator they tried to get Ditka to run against in 2004. Yeah, the ultra ultra ultra conservative who blocked for Gayle Sayers before the death of Jim Crow hasn’t seen oppression in the last 100 years. Because he sucks. 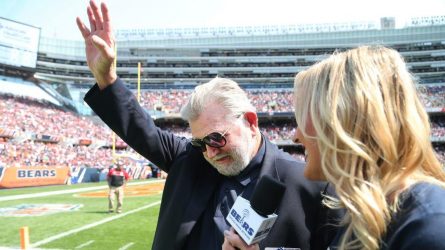 Before we get to the games we need to introduce a new segment here at the 2017 Ruthless NFL Previews column: J.J.s Unnecessarily Specific Life Advice! I know, who am I, right? Other than the guy who got us to 1-0-1 last week, of course. But my real dream wasn’t to make money off of gambling on football! My dream was to help one person, just one, so that I can feel that I made a real difference. Because life isn’t about football, or gambling, or beer or cars or sex or music or anything cool. So here goes:

I am no angel and no prude, but if you are an NFL offensive line coach, you should probably not do any white girl at the team facility. However, hey, I get it. If you’re gonna run with the devil, you may as well sprint. So if you are insistent on doing blow at the team facility, you should probably not do any right before a meeting. But hey, what do I know about those meetings? Maybe all of the meetings are about drinking 75% of like 50 beers and rapidly discussing how everyone should quit their jobs and move someplace together to join forces on some harebrained idea, in which case you’d honestly be pretty well-prepared. So if you must draw lines right before a meeting, then go ahead, but I would advise against making a digital recording of the pre-meeting Hoovering. Of course, the stereotype says that the youths (and apparently 56-year-old football coaches) of today are adamant about preserving a digital record of everything that happens. And far be it from me to stand in the way of technological development. Ergo, if there is no compromise on the video issue, then I must advise against sending said recording to a Las Vegas model / entertainer who will then attempt to blackmail you with said video, vindictively post it online, and then frame doing so as an effort to shine a light on the inequalities in the system. 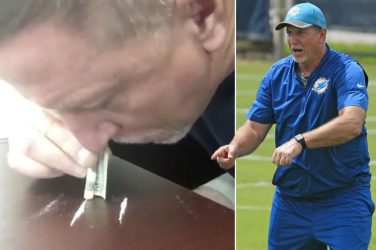 I know that with Harvey Weinstein all over everywhere this week, it is not the optimal time to come to the defense of a guy who hired a hooker as, essentially, a table. That said, should he really get his spot blown up for that? Obviously shes a model citizen but just taking it in the abstract, wouldn’t that be like a night off for a prostitute? I get that its a little demeaning, but within the context of prostitution Id think it was easy money for a couple of hours, separate and apart from the presumably free cocaine. Perhaps I can delve deeper into the inner workings of the human rail table profession once Goat shows me the door once and for all. Regardless, I was always of the impression that there was an unspoken confidentiality pact in those relationships. Then again, I always figured there was a no sending incriminating videos to the prostitute rule as well, so what do I know?

So I took the Vikings minus four on Monday night so I could get a little ahead. Don’t be nervous, I’m not Jimmy Kimmel, I did not undergo a life-changing experience wherein I learned about the plights of the less fortunate. Matter of fact, I was the less fortunate by the end of the night.

I was once in an auto accident where my skull spider-webbed the windshield of a Toyota minivan. As previously alluded to, I once fell out of a third-story window. However, I can now tell you that the feeling of helplessness as your hopes are pinned to the right arm of Case Keenum is beyond compare. The interspersed clips of Kai Forbath doinking field goals off of crossbars and/or landing in peoples nacho cups didn’t help much.

On the other hand Aaron Rodgers was incredible on Sunday afternoon, going 19 of 29 for 221 yards, three touchdowns, and no picks. After seeing action for the first time in the regular season, Sam Bradford left after two quarters, only to be diagnosed with wear and tear on the knee. Even assuming Bradford is playing, Jordy Nelson went through a full practice this week and Green Bay needs to feast on these divisional gimmes. Packers and two units or more.

I told you the Chiefs bandwagon was the place to be. As of right now, Football Outsiders has them with a 96.9% chance to make the postseason and a 24.3% change to win it all. They are incredibly good for all of the reasons that we’ve gone over and they should be favored by more than 5 in this game.

Big Ben grew up two towns over from me – home of the truth telling contest – but I never got to play against him. Rather, I got to play against trivia answer Bobby Hoying, who stayed in the league for five seasons with stints in Philly and Oakland. Despite sharpening my skills against the Solange of Findlay, Ohio-born NFL quarterbacks, I’m pretty sure I could have intercepted a Roethlisberger pass over the weekend, if only I had the inclination (and, I guess out of necessity, a Jags uniform.

Honestly, the man threw five picks, lost 30-9, and openly mused about not having it anymore. He doesn’t believe a word of that, by the way, and neither do I. Pittsburgh will almost certainly see post-season play, and at that point hell still have it. But for our purposes, he doesn’t have it right now. Chiefs cover.

Granted, we took a beating when the Ravens went to London and commenced to suck on ice a couple weeks back. However, did you see how bad the Bears looked on Monday? Trubitsky might have something, but his first frying-pan start did not leave a lot of room for hope.

Baltimore, on the other hand, showed some signs of life by beating a (sans-Derek Carr) Raider team by 13 on the road, and Flacco completed 73% of his passes without an INT. Granted, he didn’t throw a TD either, but the Ravens still put 30 on the board, and results matter.

More importantly, Baltimore has won five straight home games against the Bears, both straight up and ATS. Meanwhile, the Bears have won exactly one of their last nine games, that being the gimmicky OT win over Pittsburgh back in week three. I’m hardly a believer after they hurt us so bad in London, but Im at least willing to hold their hand and walk around the block in order to see if I have it in my heart to forgive them. 6.5 is a good chunk of handicap but remember that the Bears couldn’t beat Case Keenum and Kai Forbath. Still, maybe just a single unit on this one. Make them earn the trust.

Behave yourselves, gang. Lot of fucking morons in the world. But they ain’t us, and were creeping above .500. Stick with me and trust the process.