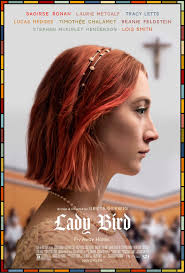 Lady Bird is dissatisfied with her life and decides to do something about it.

The movie Lady Bird was not really on my radar screen as I have been impatiently waiting for Three Billboards Outside Ebbing Missouri to make its appearance in Northern Colorado. Maybe people are still watching Will Ferrell’s latest stinker and the Bad Mom’s Christmas debacle and there is no room for a quality film. I do not ordinarily get excited about coming of age films, especially one by a fledgling actress turned director Greta Gerwig

I did enjoy immensely the movies Ghost World and Boyhood, but there is a ghost world of difference between Terry Zwigoff, Richard Linklater and Greta Gerwig. Please forgive my skepticism, but I also had a warning from Matt Cale who saw it at Telluride. The glowing reviews could not be ignored, however, and I saw this film yesterday. Glowing reviews is an understatement, as Lady Bird received virtual universal acclaim (21 perfect 100 scores from Metacritic Reviewers). These numbers are hard to ignore, especially with a 100% Fresh rating from Rotten Tomatoes, which I do routinely ignore.

Her Christian Catholic given name was Christine, but she preferred (INSISTED!) that everyone around her call her “Lady Bird”. Lady Bird was devastatingly focused on her inadequate and barely tolerable life in Sacramento. She wanted bigger and better things than her current pedestrian family life and her barely tolerated Senior Year at a Catholic High School. The irresistible force and the immovable object clashed long, hard and continuously as Lady Bird and her mother (Laurie Metcalf) tried to exercise their individual and separate wills.

They loved each other, but did not like each other and even the intervention of an overly-understanding and helpful father (Tracy Letts) did little to ameliorate the seething and constant war between mother and daughter. Lady Bird wanted to attend an East-Coast Liberal Arts College, and well, the grades and especially the finances did not support these goals. According to Mother, Lady Bird would just have to make do at U. of Cal., Davis, a local university. Father had lost his job and Marion McPherson had been supporting the family financially by working double-shifts at the Psych Hospital. She was not happy. No one was happy in this family, but they all struggled together in a 3 BR and 1 Bath house that was intended to only be a starter. 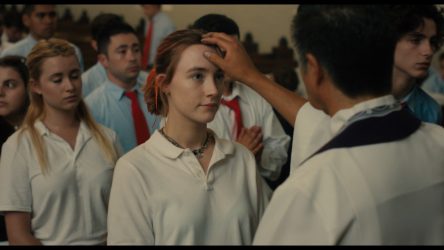 The bulk of this movie was about Lady Bird tolerating her Senior Year at a Catholic High School. You see, her mother had made huge sacrifices to send Lady Bird to this school in order to protect her from the horrors of Public School. Mother never, ever let Lady Bird forget this.

I was fully prepared to relentlessly mock the Catholic High School scene. Their comical rituals. Their funny-looking Nuns and Priests. Their stupid-looking garb and mannerisms. This was not to be as something happened while viewing this movie. I was engaged and enthralled by its excellence.

Watching Lady Bird was like slowly falling in love. The scenes at the High School with the Nuns and Priests were some of the best in the movie. The Football Coach was forced to take over from the Drama Priest who was suffering from depression. He drew X’s and O’s to orchestrate the play. The result was hilarious chaos as was with the Head Nun who graciously accepted a prank from Lady Bird. Even the fairly graphic sex scene made me smile and not cringe. The very best scene, however, was the one where Lady Bird forgave and accepted her first boyfriend for the person that he was.

This film slowly embraced me then deliciously blew me away. There was not a moment in the 93 that I was not totally engaged. I cared about every single person in this great film. Seldom will such a mundane and what you think will be predictable story, be presented with such riveting magnificence. Every single character will make you smile and make you want to just hug them. From the tragic failed boyfriend of Danny, to the nihilist, mysterious and anti-everything virginity taker Kyle (played magnificently by Timothee Chalamet), every character had genuine worth.

Lady Bird made the rounds, from her heart-throb first love, to the rich High School pop-girl, losing her virginity to the liar, nihilist but splendidly low-key Kyle, and back again with fierce loyalty to her rejected best friend Julie. It was so satisfying when Lady Bird ditched Kyle and went back to her best friend and took her to the Prom. They had to eat communion crackers first, it was just their way. 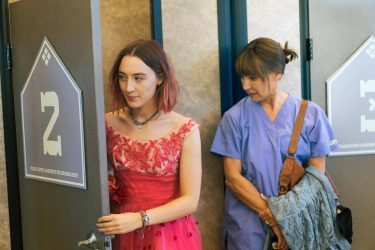 I would never spoil such a delightful film, so just take my word and try to catch a screening if you can. Lady Bird was such a great surprise and pleasure to watch. The acting by Saoirse Ronan was as stunning and surprising as the direction and writing by Greta Gerwig. Laurie Metcalf was perfect as the long-suffering Mother who loved, but did not like her daughter. The ending scenes were heart-wrenching, but quite satisfying. Greta Gerwig has made her bones with this film and I look forward to seeing more from her.

9.5/10.0 With the Goatesian Seal of Approval for a Coming of Age Film.