Home / Featured Posts / What should You Know about VR Gambling?

What should You Know about VR Gambling?

When it comes to gambling, people tend to stake a lot to win more money or to pass the time. In the world of gambling, you could choose to play a slot machine, lottery or scratch card. However, things seem to be changing in the world of gambling with the advent of technology. Many opportunities have arisen in the last five years to give people a chance to enjoy gambling the more. Presently, betting and playing free slots with no download on Slotozilla just become more interesting with the 21st-century innovations. 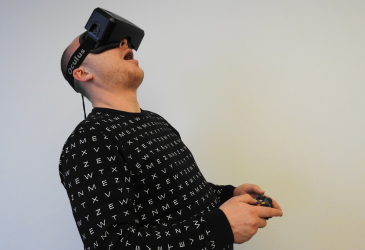 It is expedient for every gambler to know more about Virtual Reality which has changed Gambling. It is also necessary for them to understand the implications and privileges attached to VR games. This is not only to improve the way they place their bet but to guide them in how they gamble.

Virtual Reality came at this period to give iGaming industry push to satisfy the gamblers. It also gave it an opportunity to transfer their activities to the net without losing most of the features. With the three dimensional environments and the opportunity interact with other gamblers, gamblers seem to be satisfied to some extent.

In the beginning, Virtual Reality and its design was a laughing stock. Criticism trailed it that many considered the project as abandoned. Despite all the criticism, Palmer Luckey developed the first prototype of the Oculus Rift in 2010. This prototype changed the VR game and revolutionized the market to bring more advanced VR. By 2013, Valve had a breakthrough in the VR by developing a low persistence display VR which was of high quality.

Between 2015 and 2016, different top-notch Virtual Reality devices were released. 2016, in turn, became a significant year in the Virtual Reality Gaming world. At this period, Oculus Rift (which was purchased by Facebook in 2014), Stream VR (Valve), Vive (HTC) and PlayStation VR (Soy) brought about the new wave in the gaming world. The introduction of these devices makes several companies in the iGaming industry to embrace the new phenomenon.

VR casino games are aimed at people between 30 and 40 years who take gambling as a pass time. Despite this, it is blurring out the difference between video game and gambling. Casino games are becoming more appealing to young people these days because of VR games.

Due to its infancy in the iGaming industry, the number of VR casino games as at present is few. Some of these games include Poker Dice, Gin Rummy among others.

One thing that set VR slots aside is that it has colorful symbols with the huge prospective payout. VR slots allow you to experience slot games the same way you would enjoy it in both online and land casino.

VR Reality aims at giving the players the best. As a result, it has a huge requirement for graphics to provide a high-quality image. Apart from this, the latency is kept at a normal level to prevent you from experiencing any lag while playing the game.

Virtual Reality provides an engaging atmosphere that stimulates both the auditory and visual senses of the player. It also has in stock a real-time multiplayer option and a feature for you to interact with other gamblers. Its chat and voice functionalities coupled with the avatar choice give it an upper hand when compared with the online casino.

The demerits of playing VR games:

To get the best from the VR gaming, you need a special VR headgear. The VR games have a graphical demand that is greater than other ordinary games. You should also understand that VR gaming requires a lot of processing power than ordinary games. If you want to invest more in the game, you should go for a desktop with great graphics and huge processing powers. VR Headset will allow you to enjoy the sound.

Virtual Reality has taken gambling to another step. You can now relate to the dealers and other gamblers while playing a VR game. You can also have a feeling of what is going on at the Casino without even stepping your feet at the Casino. However, what serves as a shortcoming for VR gambling is that you tend to spend more while playing. This should not bother a passionate gambler like you. You can play the game and enjoy what this technology has in stock for you.