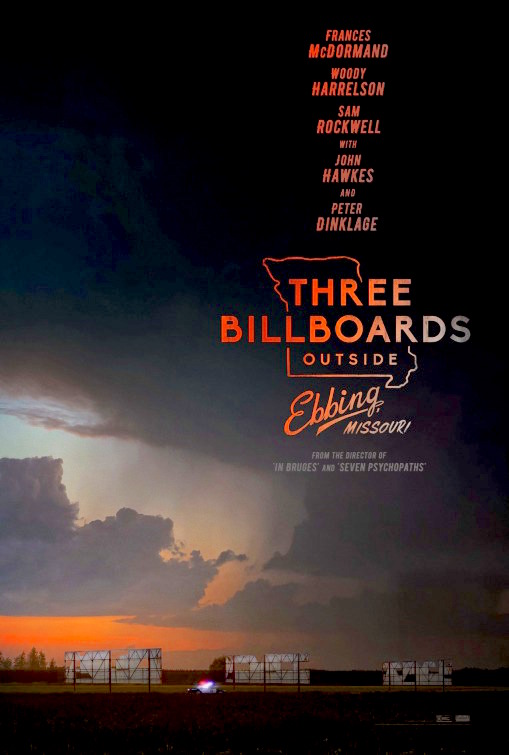 It’s not just about the billboards.

Whose side are you on?

About seventeen minutes into Three Billboards outside Ebbing, Missouri, [Goat’s Review] Sheriff Willoughby (Woody Harrelson) has the following exchange with distraught mother Mildred Hayes (Frances McDormand) whose daughter was raped and murdered months earlier and who erected three billboards questioning the police’s job performance because she is pissed at the sheriff for not arresting anybody for the crime:

Mildred: “Could pull blood from every man and boy in this town over the age of eight.”

Willoughby: “There’s civil rights laws prevents that, Mrs. Hayes, and what if he was just passing through town…”

Mildred: “Pull blood from ever’ man in the country, then.”

Willoughby: “And what if he was just passing through the country?”

Mildred: “If it was me, I’d start up a database, every male baby what’s born, stick ’em on it, cross-reference it, and as soon as they done something wrong, make a hundred-per-cent certain it was a correct match, then kill ’em.”

Prior to that exchange, writer/director Martin McDonagh had us fully on Mildred’s side and thinking the sheriff was a lazy dick. After that exchange, we’re hooked by this film because we have no idea who we’re supposed to be rooting for. Of course we want justice for Mildred and her daughter, but the sheriff makes some damned good points and sounds like he really tried to find the killer. This is the epitome of a movie that is constantly pulling you from one side to the other and not just with the main plot. Every character in this movie, from Mildred’s son Lucas (Robbie Hayes) to angry and racist officer Dixon (Sam Rockwell) to billboard proprietor Red (Caleb Landry Jones) to others, are multi-faceted, rich characters that will take your initial allegiances and stomp on them. Then, they’ll stomp on them again just to make sure you weren’t getting comfortable again. It’s a rare movie that can make you root for everyone and no one at the same time

Rating: Don’t ask for any money back. Mildred didn’t after Willoughby’s speech so neither should you.