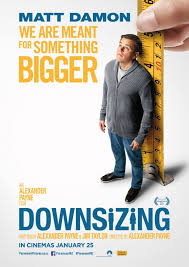 Honey, I shrank the movie.

Fair Value of Downsizing? $5.00. Worth a rental, a Redbox. As fun and clever a modernization of Jonathan Swift as can be hoped for.

Who is this film perfect for? Alexander Payne’s (Sideways, Election) latest comedy is abundant on whimsy but short on jokes. Methadone for people jonesing on Michel Gondry or other Science Flimsy sorts of films.

Who will not like this film? Hong Chaus pidgin English is already dated, nearly as cringe-worthy as Mickey Rooney in Breakfast at Tiffanys. Don’t blame the actress; blame writer Jim Taylor.

Those looking for black comedy, or satire should look elsewhere. Downsizing moves about with the glossy affability of an IKEA store. 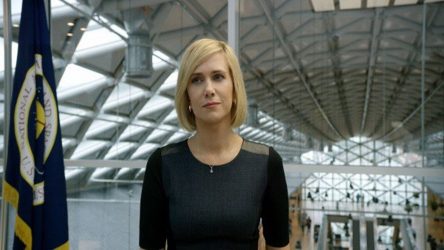 Say More: Were in an autumnal, pensive phase in our culture. The clathrate gun of methane deposits has already been released; whether by means of nuclear war or pandemic or hydrogen sulfide releasing from the ocean, the extinction of the human species is the likeliest outcome of the 21st century. The question is no longer one of how we can save the world; its a question of how you’re going to spend your dwindling reserves of time.

Downsizing might be subtitled How I Learned to Stop Worrying and Enjoy the Environmental Collapse. Initially, the film seems to be a mordant parable of switching to solar/ going with electric cars/ etc.: this wonderful new technology, which enables people to live more by living little. At action figure size, everybody can enjoy huge mansions, abundant portions, and luxury living off the abundance of natural resources.

But humanity is more than just a species; we are a biome. Everywhere we go, we recreate the world into the same light savannah and temperate housing that we prefer. And, as Payne portrays, shrinking people down to doll size does nothing to undo inequality and exploitation. And this revelation is what sets Damon off upon his globe-hopping bildungsroman, traipsing from one miniature person colony to the next.

How does this film compare to others like it? It certainly is the best shrunken people movie since Honey I Shrank the Kids. Christopher Waltz steals every scene he’s given, as Damons eurotrashy neighbor.

What works in this film? Payne gets a lot of mileage from the juxtaposition of the shrunken people with the ordinary people. In fact, the best usage of the conceit is from showing the tiny people at bars, school reunions, navigating with and interacting with the normal sized people.

What fails in this film? Kristen Wiig doesn’t really get a lout of comedy material to chew on. And there’s not that much absurdity to the film. Matt Damon is an good-natured straight man, but for his ingnue to be effective, it needs more characters with character. And only Waltz delivers upon that.

Also, the film spends more time on the needless how of the process, and less time with the ramifications of the film. Butterflies appear in one scene, as large as hawks. But Downsizing skips on the classic tropes of the shrunken person film, namely the sudden struggles against formerly innocuous creatures and objects.

Conclusion: Neither essential nor tiresome, Downsizing is a light trifle of a film, good for family outings and large groups where you need to hedge your bets. You could do worse, and if you want to just relax in front of a screen in the post-Christmas period and not need to pay much attention, it’s an excellent choice.